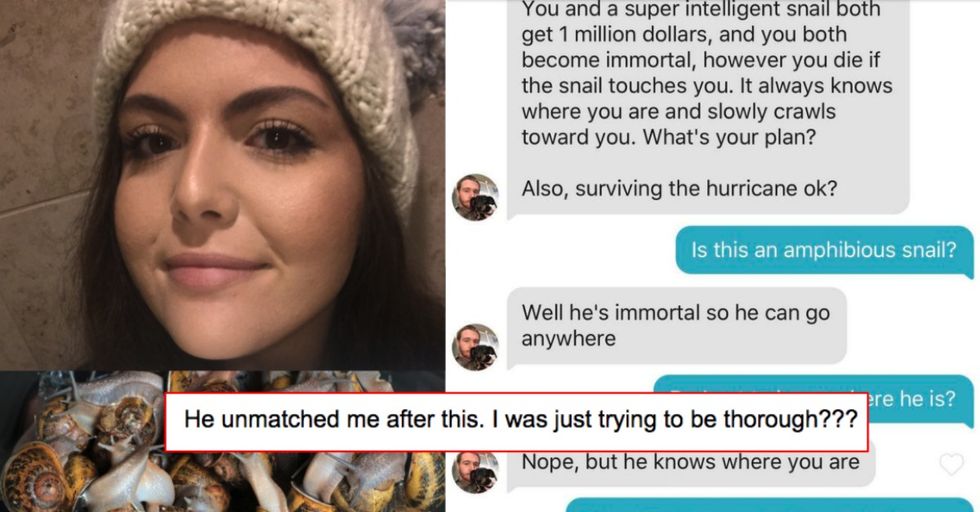 After She Thought He Rejected Her, These Two Snail-Lovers Found Each Other by Chance Online

It all started with a question about a snail.

The story you are about to read is almost like "Romeo and Juliet," except... well, it involves snails.

She posted a conversation that she had with one of her Tinder matches. The conversation has now gone viral. But at the time she posted the story, it was a much more melancholy situation.

Walker, her Tinder match, sent her this question.

He wrote, "You and a super intelligent snail both get 1 million dollars, and you both become immortal, however you die if the snail touches you. It always knows where you are and slowly crawls toward you. What's your plan?"

Our protagonist sent back a very detailed response.

She said, "First I move to Hawaii. Let's say snails move on average 0.03 mph. To move 1 mile, it takes him 33.3 hours. I'd move to Maui, which is 3,815 miles away. He would have to travel for 127,167 hours to reach me, or about 14.5 years. 7 Years after moving to Maui, I would move to Rome to ensure that he'd either have to travel the entire Pacific Ocean or turn around and travel back through the Panama Canal. I would continue calculating how long it takes him to get halfway to where I move to, then I switch continents at the halfway point. This also prevents people from noticing me not aging or getting sick."

Our protagonist continued, "Additionally, immediately invest 1/4 of the money, put 1/2 in savings/safe bonds with high interest rates, and use 1/4 to live of initially, thereafter living off dividends of my investments."

But then things took a turn for the worse. Her Tinder match unmatched her after her very detailed answer to his question. She said, "He unmatched me after this. I was trying to be thorough????????" However, their story was far from over.

People had a lot of opinions about this crazy snail situation.

"Why does the snail get a million dollars. that's crazy. it's a snail what does it need the money for," protested Reddit user nathan_barely. Some people argued that the snail could just board a plane and follow the woman. Reddit user bitcoin_noob said, "It's super intelligent and immortal, it can just crawl onto the landing gear." Another user, kraftmatic81, said that the snail probably needed a bit more protection than other people expected: "True but just because it is immortal does not mean it is immune to damage. And if it went in the landing gear it would be subject to crazy cold temps and likely crushing. I fell like it would more likely sneak into someone’s carryon, like one of those small dog ones."

Reddit user dudeatwork77 scrapped the idea of the snail sneaking onto the plane entirely, writing: "He's immortal, not immoral. He'd pay for the ticket."

Speedymg had different concerns entirely: "Why is everyone focusing on the logistics of this snail getting into the plane and not the issue of how this snail is able to use the money (no hands, or arms for that matter) it can’t talk, and it can’t fight, it can’t move quickly enough to remain undetected if it is anywhere outside of a forest or grassland. The snail will never get to you unless at some point you end up slipping into a coma indefinitely!"

The survival theories kept getting creepier and more involved.

Someone argued that we really should have defined our terms before we launched into this debate. They said, "I think we need a definition of 'immortal' before we can go any further. Is it just can't die of old age? Is it immune to all damage and disability? Is it super-fast healing on anything but decapitation? THERE CAN BE ONLY ONE!!!" Another user suggested, "If you live in a castle surrounded by salt will it fizzle in agony for an eternity? Will it begin to question its motives and wish only for the elusive taste of death? Will it turn to posting memes to me_irl?" "See this is why you befriend the snail and agree to just steer clear of each other," offered Reddit user xuu0 with a pang of remorse. But saints400 brought it back down to the sad level it was at previously: "Snail just wants to die. Imagine being incredibly smart but trapped in the body of a snail for eternity. A living hell until he finds you and the sweet release of death. Gotta have empathy for that snail."

When we said the theories got weirder, we meant it.

But, at the end of this long and dark tunnel of a story, there was a beacon of light.

First, someone added a thought that no one had thought of yet: "Why does everyone assume the snail is evil? Why can't he be a friendly snail who just wants to celebrate being an immortal millionaire with someone who can relate?" And then, after the post went viral yesterday, the original poster's Tinder match, Walker, saw it and actually responded, writing: "Hi! I am the Walker that the OP was talking too. Apparently this was back in August, and I honestly don’t know why I would have unmatched after that. I actually really like that answer." They messaged back and forth publicly and then Walker messaged her directly so that they could rekindle their long-lost flame. True love always finds a way.