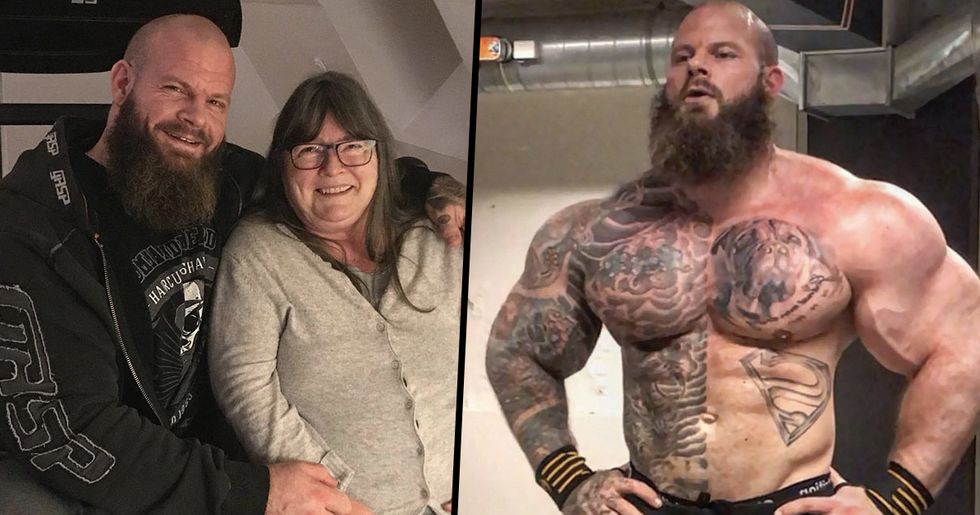 Bodybuilder Found Out He Was Turned Into A Meme, He Had the Perfect Response

The Internet's greatest honor is to turn you into a meme. Think of all the countless internet greats: Bad Luck Brian, Overly Attached Girlfriend, and anything about cats. What's more to life than becoming an internet meme? My mom says "a lot of things," but she's wrong. There's only one thing. And it's when the internet cares enough about you to hear your story after you've already become a meme.

And that just happened to bodybuilder Søren Falby. Over the weekend, a new meme was born, and then the strongest person I've ever seen was so cool in how he responded to it. Read up on what's likely to be the final touching internet moment of 2018 and have your heart warmed with the rest of us.

He spends all day in the gym.

A feat I will never accomplish.

He relaxes by the pool.

Something we definitely have in common!

And looks like the newest villain in "Creed III."

Seriously, how do you have abs that big?

Here he is when he was only 17-years-old by the way.

Yeah– he was a teenager, but somehow managed to look like he was in his mid-thirties here.

This past week, the bodybuilder was turned into a meme.

I honestly don't know what I'd do if this guy slapped my mom. Call someone with a horse tranquilizer?

But Falby seized the meme by its proverbial horns and hit back with this adorable photo of him and his mom.

How cute! I'll be the first one to say, Christmas cards from this family would be awesome.

Guys! See, jocks can be wholesome too!

Like seriously, who knew this bodybuilder could be wholesome?

Here he is with his dog who's maybe even bigger than he is.

And with his adorable partner and fellow bodybuilder, Malene Larsen.

How much money does someone want to bet that this bed is custom made?

Seriously they do everything together.

And by everything, I mean, workout– because what else do they do?

This guy has everything. And we gave him a meme to top it off!

I just...what is happening here?

I would guess drag, but this is the most low-effort drag of all time. What's really going on?

Oh, so that thing that happens in every relationship? Got it.

See what I mean, they're adorable! How does this story keep getting cuter and funnier? And it doesn't even stop here.

How does he fit in her clothes in the first place?

I would split that dress open as soon as I tried to put it on.

And it doesn't stop there.

His love of dogs knows no bounds.

I'm realizing now that this photo might traumatize my mom and anyone under the age of 8-years-old who somehow stumbled upon this article.

So now that I've introduced you to your new favorite bodybuilder, let's see what everyone else has to say.

The meme within the meme.

Who doesn't love a guy that respects his mom?

Their bond must be so close!

Because of course, they did.

At least one small corner of Reddit is super wholesome.

Emphasis on the word "giant".

Seriously. He weighs 287 pounds and I'm pretty sure I watched him gain 10 pounds while I was writing this article.

And at second thought, who would ever want to fight this guy!

Um yes and no. The dude has definitely used his fair share of steroids... This next redditor makes a compelling point about the bodybuilding community and steroids.

Bodybuilding, steroids, and you!

Very true. Definitely not wise to ignore the downsides of a sport like this.

He's maybe someone to keep at a distance.

That is until you meet his mom, or his dog or, you know, get to know him.

Pretty sure everyone I've ever met who rides a motorcycle would agree.

And honestly, when you're that huge, are you even afraid of anything?

What are your thoughts?

Is Søren a lovable softy or would you keep your distance if you ever saw him hanging around your mom? We'd love to know!