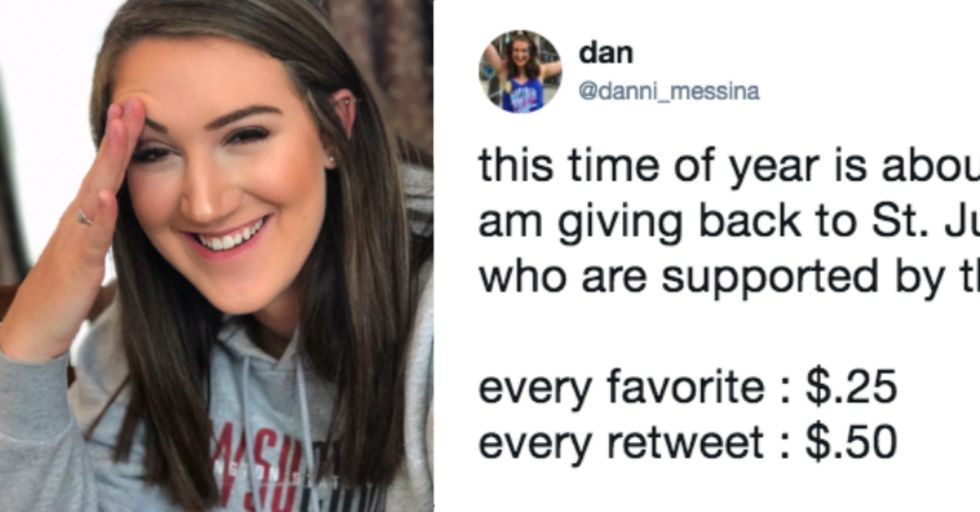 After This Teen Pledged to Donate Her Retweets to Charity, Things Quickly Spiraled out of Control

There are countless stories out there of famous people who decided to use their platform to benefit those less fortunate. After Hurricane Maria devastated Puerto Rico earlier this year, Pitbull flew his own personal jet to the island to transport cancer patients. Guy Fieri donated food to victims of the Sonoma fire. Britney Spears sold a (very bad) painting and donated the money to victims of the Las Vegas Massacre. Amal and George Clooney opened their own home to a Yazidi refugee. But these individuals — Pitbull, Fieri, Spears, and the Clooneys — have something important in common (other than being super generous). They're rich.

It's great to donate to worthy causes, but it becomes slightly more difficult when the Internet takes your good intentions and makes them go viral. That's exactly what happened to Danni Messina.

She's a 19-year-old student at Washington State University. And, like most college students, she's not exactly flush with cash. But that fact didn't stop her from trying to raise money for a worthy cause.

Danni was inspired to take action after talking to her friend about how he'd spent part of his Thanksgiving break in the hospital visiting his grandma. That made Danni think about all the kids who have to spend their holidays in the hospital. That gave her a great idea.

She didn't expect this:

The tweet quickly went super viral. Before long, it had more than 190K retweets and more than 140K "likes." In case you're curious about that math, it works out to about $207,000. Did we mention Danni is a college student and not a millionaire?

Obviously, Danni couldn't afford to keep up her end of the deal after her tweet took off.

In fact, very few of us normal people could. Things simply got a bit out of hand. But her intentions were pure!

Some internet curmudgeons tried to shame Danni for her viral tweet.

But come on, dude. We're starting to wonder what exactly this guy has done for charity lately. To be sure, this was an important lesson in digital virality for Danni, but she didn't do anything wrong. She had the perfect response to the haters...

When people tried to give her a hard time about her donation strategy or claim she was just trying to get internet fame, she said this:

@bootybootybry47 no, actually, I thought of it because kids are in the hospital during the holidays, literally the… https://t.co/7wRQGe0WNQ
— danni devito (@danni devito)1511727883.0

We think it's pretty safe to say she's learned her lesson. Any tweet can go viral. Let that be a lesson to all of us (also, now's a good time to say a quick "thank you" to the universe for the fact that you didn't do anything super stupid on the internet while you were in college.)

People were also hilariously reminded of the infamous "Scott's Tots" episode of "The Office."

In the episode, Michael Scott meets up with a group of high school students whose college tuitions he had previously promised to pay ... but, of course, he can't pay for them. It's one of the most cringeworthy episodes of TV to ever exist and we can only imagine how thankful Danni is that she didn't find herself in this exact situation.

At the end of the day, Danni had the right idea.

She just wanted to make a difference! And now, thanks to the virality of her failure, she actually has started raising thousands of dollars for St. Jude.

Danni started a GoFundMe campaign to raise money for the organization. So far, it's up to $8,000.

There's nothing like turning a failure into a major success, right? If you want to donate to the cause (or if you've ever made an embarrassing mistake and need to make up for it), you can do so on the GoFundMe page.

After all, it's a very worthy cause (even if it took a bit of embarrassment to get there).

Danni has received several messages from people who are directly benefiting from her good intentions. All's well that ends well, right?