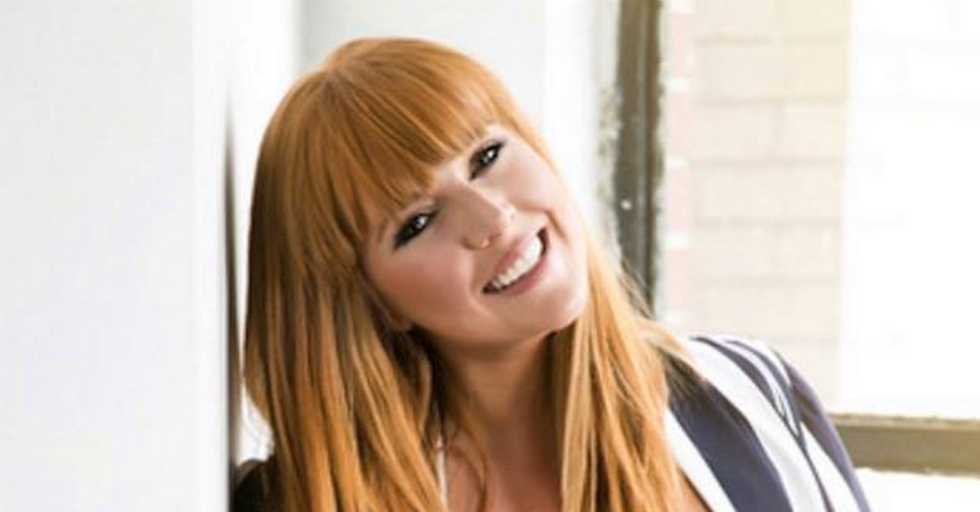 After getting engaged, most people spend their time scrolling through Pinterest and dreaming about cake flavors. But after Cassie Young announced her own engagement, she had to take time out of daydreaming to respond to a fitness trainer who wouldn't take no for an answer.

He kept trying to make her feel bad about her body, but she wasn't about to let him have the last word.

And she's now our hero.

Cassie is a self-proclaimed "Jill of all trades" — she does radio, social media, writing, editing, photography, podcasting — basically a little bit of everything. In the middle of her crazy-busy life, something wonderful happened.

Cassie and her long-term boyfriend got engaged!

Cassie and her boyfriend have been together for nearly ten years. Earlier this month, her boyfriend created an epic scavenger hunt in order to propose to her. She said yes, obviously. You don't say no to a scavenger hunt proposal. Before long, Cassie's new engagement started getting attention on social media. But it wasn't all "Likes" and supportive comments.

One person decided to reach out to Cassie to advertise his fitness training services.

The initial pitch was innocent enough. The guy saw that a potential client had recently gotten engaged and decided to reach out to see whether his services would come in handy. Cassie politely declined his offer to "get her in shape" by responding that she already is in shape. That should have been the end of it. But it wasn't.

The guy doubled down and said that she'd regret not getting into better shape for her wedding.

"If you don't hire me, hire someone," he said. He then went on to "explain" that Cassie's wedding pictures will last forever (duh). She wouldn't want to torture her descendants with images of her looking any less than her best on her wedding day, would she? As if planning a wedding and starting a life with someone isn't hard enough...

Please tell us he did not actually say that to her!

But he did. He totally did. He was probably expecting her to take his criticisms to heart and immediately hire him (because he's clearly delusional). Of course, that didn't happen. Instead, Cassie clapped back with a fierce response.

She told him that she wasn't worried about being 'fat' in her wedding pictures.

Rather than being worried about what people think about her body hundreds of years from now, Cassie informed the fat-shamer that she was instead focusing on leaving an actual legacy. Because she has an actual life and isn't here for your negging.

Of course, the guy still wouldn't take no for an answer.

According to him, there's a difference between accepting the way you look and being happy with it. And "accepting" the way you look on your wedding is simply not acceptable. This guy is a real piece of work, huh?

The fat-shamer went on to say 'You can lead a horse to water but you can't make it drink.' Cool.

Apparently, it's OK for him to say offensive things like that because he has also struggled with body image issues. [Insert eye roll here.] Cassie wasn't having it, though. She even brought in historical data, saying (accurately) that overweight people were once considered among the most beautiful.

Much to our delight, Cassie wasn't done with the fat-shamer yet.

She totally called him out for projecting his one feelings of insecurity onto her. You're probably reading that response right now and thinking that she really got through to him and he learned his lesson. Nope!

He still had more to say.

Seriously. Will this guy ever stop?

According to this guy, it's not OK to enjoy food.

If loving food is wrong, then we don't want to be right. Newsflash, dude: You can love food while also loving yourself. You can be lovable at any size. And trying to make women hate their bodies is a real dirtbag move.

In her final response to the guy, Cassie told him to 'get some morals.'

She later said this about the exchange: "If you think of life as a 'game' with being skinny as how you 'win,' this guy is offering to play by the rules and get you there. I’m telling you the game is BOGUS. You don’t need the game. I reject the game. I REFUSE TO PLAY. It’s a fake construct that you can step outside of."

And we all cheered!

And then we ate some cake. Because weddings are for cake, not for fat-shaming. Everybody likes cake.