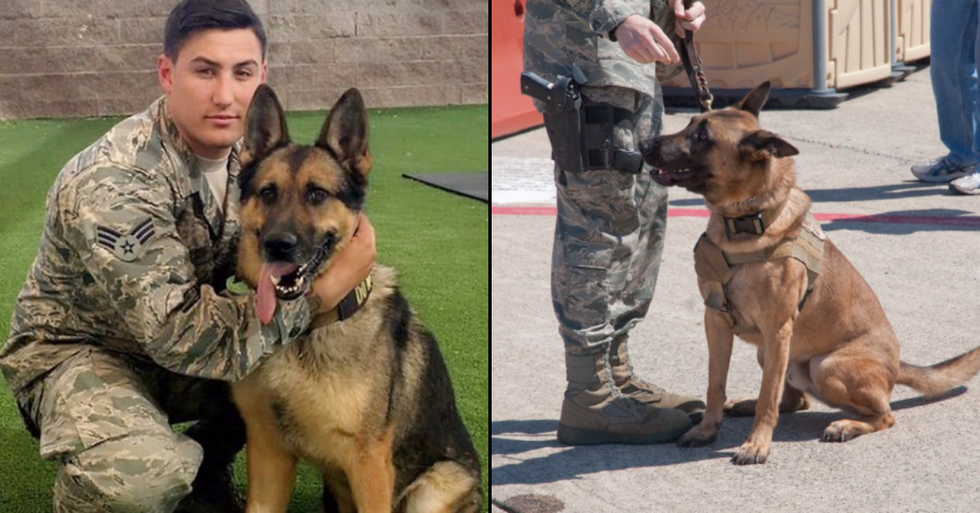 Any dog lover knows that adoption is absolutely vital. But one air force is desperate to find forever homes for its adorable retired pooches.

But one story has really captured the internet's heart this week.

And this story is just adorable.

Everyone knows doggy adoption is key.

The thought of dogs still in search of a forever home basically breaks our hearts.

It comes from the Air Force.

We often think about the veterans who bravely serve - but what about their canine counterparts?

But they're invaluable, too.

These brave pooches do great work for the USA - often rather thanklessly, too!

And once their service is over?

Well, the military is struggling to know exactly what to do with them.

So they're asking for civilians' help.

The Air Force wants the public to consider adopting one of their dogs after their service is over.

These retired dogs need a place to go.

Many of the puppies who fail the training are quick to get adopted. But it can be trickier for the older pooches.

But there's a lot to love about these dogs!

For one thing, they're exceptionally well trained - obviously.

They're ready to help you out in all situations.

The paperwork is a lot, though.

In fact, the whole process can take up to 2 years.

Hey, they need to make sure you're a suitable fit!

Applicants need to have a six-foot fence, not have kids under the age of 5, and no more than 3 dogs living with them.

They also need to have a veterinarian set up, and provide 2 character references. Phew.

Still interested? Here's the info you need! Fancy more adopted dogs? Scroll on for the before and after pictures which will melt your heart.