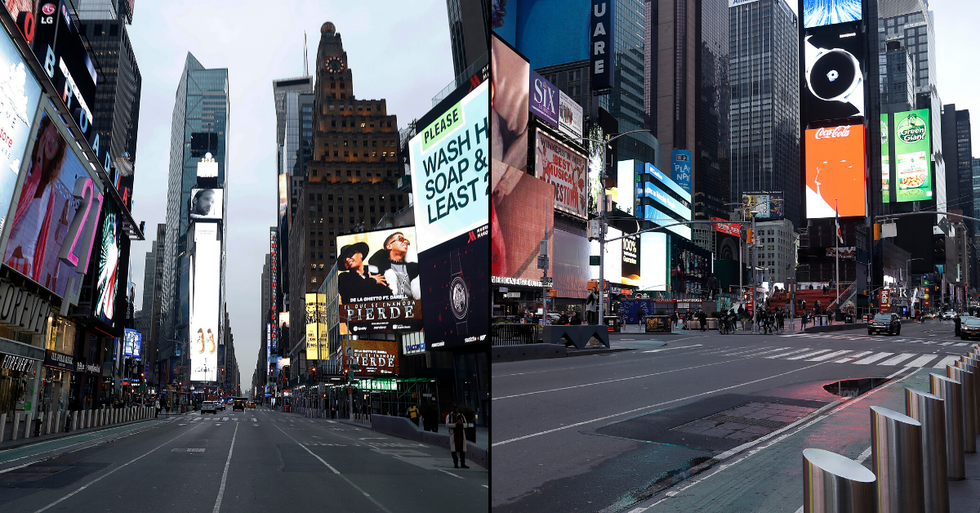 Amid the coronavirus pandemic that has brought the world to a total standstill, there is at least one silver lining - New York City's air pollution has decreased dramatically as a result of self-isolation.

Keep scrolling for the full story, and to hear how else the quarantine of New York's residents has benefited the environment.

It's been a turbulent couple of months.

Since the start of the new year, COVID-19 has been sweeping the planet at an alarming rate, and it is showing no sign of slowing down anytime soon.

Over 200,000 people all over the world have been infected with the virus...

We are slowly becoming one of the worst affected countries in the COVID-19 pandemic, with 14,366 confirmed cases of the virus and a further 217 deaths.

Sanctions have been put in place across several different states in a bid to combat the spread of the virus.

And thousands of frantic shoppers have been descending upon supermarkets and rinsing them of their products.

And now, a large proportion of the country is now in self-isolation.

Though we aren't as severely affected as countries such as Italy, Spain, and Iran, a full country lockdown is certainly imminent, and hundreds of us are already self-isolating in preparation.

Many states have already been ordered to "socially distance"...

On Monday evening, the mayor of San Francisco ordered her entire population to “shelter in place" for a few weeks.

And San Fran wasn't alone in their decision.

On Monday also, officials urged the inhabitants of New York City to also self-isolate and "socially distance" themselves.

The city that never sleeps has finally been brought to its knees.

And the streets of New York, Manhattan, and Brooklyn have been left completely deserted.

Museums, theatres, and libraries have closed their doors...

And schools across the state have shut indefinitely.

And, while New Yorkers are quarantined within their homes...

Restaurants and bars are deserted, leaving owners with little choice but to force closure.

Times Square has also been turned into a total ghost town.

With Trump's travel ban in place, the tourists that usually flood the streets of Times Square are nowhere to be seen.

It's a difficult situation for everyone involved.

Thousands of jobs are affected as a result of the lockdown, and barbers, gyms and other businesses have ceased operations for the foreseeable future. And, for the few places that are still open, cuts are on the horizon.

But, with every dark cloud...

There is a silver lining.

As a result of New York's self-isolation measures...

Carbon monoxide, which is a harmful gas produced by vehicle emissions, has long plagued the streets of the Big Apple as a result of it's over-congested streets and highways.

But, with the traffic level decline this past month...

The dangerous emission levels have seen a drastic improvement.

Researchers from Columbia University looked into the effects that the lockdown has had on these emissions...

And they found that the level of carbon monoxide in New York City has fallen by a staggering 50 percent.

The levels of carbon dioxide in the air has also dropped by around ten percent, and methane has also fallen "significantly", according to the Colombian team.

At least there's one positive out of all of this madness...

This drop is attributed to people working from home is reducing demand for public transport and cutting the number of vehicles on the road, the researchers explained. Let's just hope we can keep it that way once the lockdown has been lifted. For more on the self-isolation efforts of people all over the world, keep scrolling to hear the heart-warming story of 3 elderly women quarantining together...
68%