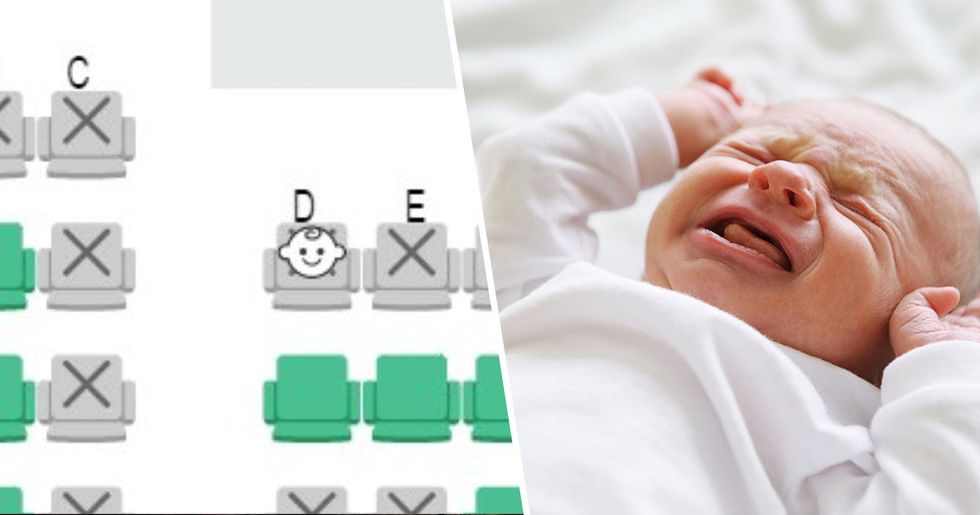 Airline Introduces Booking System That Shows Where Babies Are Seated

Travelling can be a stressful affair. Faffing at security, frantically rushing to your gate, or taking things out of your luggage because you went over the allowance is not fun - but add a screaming baby into the mix and the stress levels can ramp up.

Of course, the parent is probably stressed too and doesn't want to hear the screeching either, but we all have to admit that the piercing screams of a youngster are the last thing we want to be hearing while jetting off.

But one airline has come up with an innovative solution wherein a baby icon will appear on the seat booking system to alert customers that a baby will be in that seat.

However, there are a few issues with the new system, and, of course, the feature has also solicited some fairly strong responses online. Keep scrolling to read more about the system aiming to avoid a hefty number of headaches.

We all love the feeling of going on vacation.

There's no better feeling than packing your suitcase knowing you'll soon be jetting off for a well-deserved break.

It's something we all look forward too.

Let's be honest, we're all guilty of downloading those countdown apps so we can check how long we have left to wait.

Most of us travel via airplane.

Whether it's a domestic flight or long-haul, the majority have opted for air travel at some point.

But travelling this way can be a stressful experience.

Rushing to the airport, meticulously weighing your suitcase to ensure that it’s under the limit, and standing in line after line to then be crammed into your seat doesn’t always make for the most desirable of experiences.

Add a screaming baby to the mix? The stress levels instantly ramp up.

No one wants to be sat next to a screeching baby while en route to what we hope to be a relaxing vacation.

Sorry parents, but there isn't anything worse than a baby that won't stop crying, especially on a long-haul flight.

Trapped on a plane for several hours with a restless youngster? Not exactly the most thrilling of experiences.

Of course, parents don't exactly want to hear the screeching either.

And we understand you're doing your best to settle the baby, but it's still not what we want to hear the entire time we're on the plane.

But one airline has come up with a handy solution to this noise-fuelled conundrum.

Japan Airlines has created a new feature in its booking system that'll mean you never have to go through that sinking feeling of discovering you're seated right next to a baby.

Like most airlines, the company lets you choose your seats prior to flying.

It's a feature many of us take advantage of, especially if you have a preference of sitting in the aisle or next to the window, for example.

But they've added a handy new feature to their booking system.

Now, passengers will see a baby icon appear on a seat in which a baby will be sat.

Which is great news for those of us who want to swiftly avoid the youngsters.

Although it's not so great for the parent, who can't get away from the screams. Damnit.

Here's how the airline describes its new feature:

"Passengers traveling with children between 8 days and 2 years old who select their seats on the JAL website will have a child icon displayed on their seats on the seat selection screen," they wrote on their website. "This lets other passengers know a child may be sitting there." Seems pretty nifty.

But there are a few issues with the new booking system.

What happens when the people traveling with the child book their seats last minute? The surrounding passengers would likely have already chosen their seats, assuming they were in a baby-free zone, only to heartbreakingly discover a gurgling baby turning up next to them.

Eventually, the plane would fill up, meaning those late in booking their seats would have no choice but to place themselves in the screaming danger-zone.

Not to mention the fact that the system doesn't account for toddlers...

Which are often even more annoying than small babies, as many of them seem to take a liking to kicking the seat.

The airline has also said the system only works for those booking through the carrier's website.

So those booking through a third-party will still run the risk of being placed in the baby danger zone. Plus, the baby icons won't show up if there is any kind of change in the aircraft.

But, despite its downsides, it's definitely a good addition to online booking.

There's no doubt that several people will reap the benefits of a stress-free journey.

After hearing the news, several have taken to social media to share their opinions.

Many agreed that the new feature is a good idea, with some even going as far as to say it should be mandatory for all airlines.

It seems some parents think the whole thing is one big overreaction.

Either way, those flying with Japan Airlines can enjoy the benefits of the new system.

Hopefully, it'll save a lot of potential headaches.