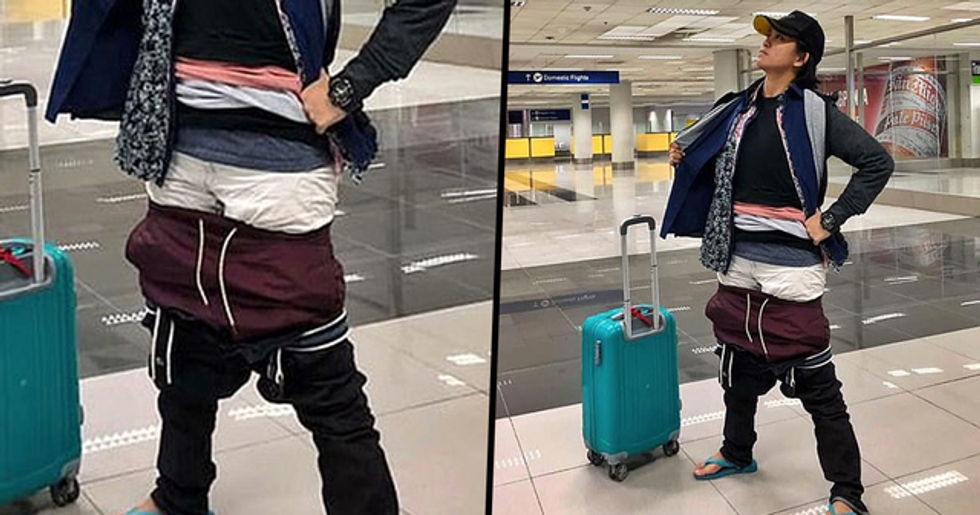 As if paying for plane tickets wasn't expensive enough, it seems as though they want to add as many sneaky extra charges as possible. From extra legroom to early boarding, it truly seems as though nothing comes for free. But one of the biggest ways an airline can squeeze you for a few more dollars? It is, of course, the extreme charges for checking a bag.

But one passenger decided enough was enough when his bag came in over five pounds over the allowance. And rather than spring for an extra fee? Well, they decided to wear almost everything in their case - and the results are impressive.

There's nothing more relaxing than being on vacation.

Chilling out in the sunshine is one of the best ways to let the stresses of the world just melt away.

But with that comes a significant downside.

Before you go anywhere, you have to pack - and everybody knows that packing is the worst.

If you're traveling by car, packing is bad enough.

And that's without the horrific regulations you have to face if you're traveling via an airplane.

Alongside the (incredibly annoying) restrictions on liquids ...

There's also the weight restrictions on carry on. And if you think we're going to pay extra to check a bag, you've got another thing coming.

All of a sudden, holidaying isn't so relaxing.

And it starts to become one of the most stressful experiences on earth. Oh, the irony.

But one woman came up with an innovative soltuion to the problem.

This is Gel Rodriguez, a student nurse from the Philippines. And when traveling recently, she ran into a problem as old as time.

She attempted to board with her carry on bag.

But the airline employees quickly told her there was no way she was allowed - as her bad was nearly five pounds overweight.

They offered her a classic solution.

She could check her bag in - but it would come at a hefty cost.

But Rodriguez wasn't too keen on this.

"I didn't want to pay the fee for the excess baggage because it was only two kilograms (4.4 lbs)" Gel told VICE.

She decided that instead, she'd wear all her clothes.

"When the airline staff at the check in counter said, 'Only seven kilos is allowed in hand luggage.' Me: 'No problem.'" she laughed.

As we have to say, it's pretty impressive stuff. We don't know if we'd have pulled it off quite so well.

And many people were similarly impressed.

She captioned the now-iconic shot with the laughing face emoji, plus the hashtag #ExcessBaggageChallengeAccepted.

And as for whether she has any regrets?

"It was really hot," she said. She also wishes she'd gone for a better pose - as she had no idea the picture would go quite so viral.

And people were pretty impressed.

"Why didn't I think of this?" was the overwhelming response.

"I wish I did this, I ended up throwing some of my things in the trash bin. What a pity." shared another commenter.

We have to say, good effort.