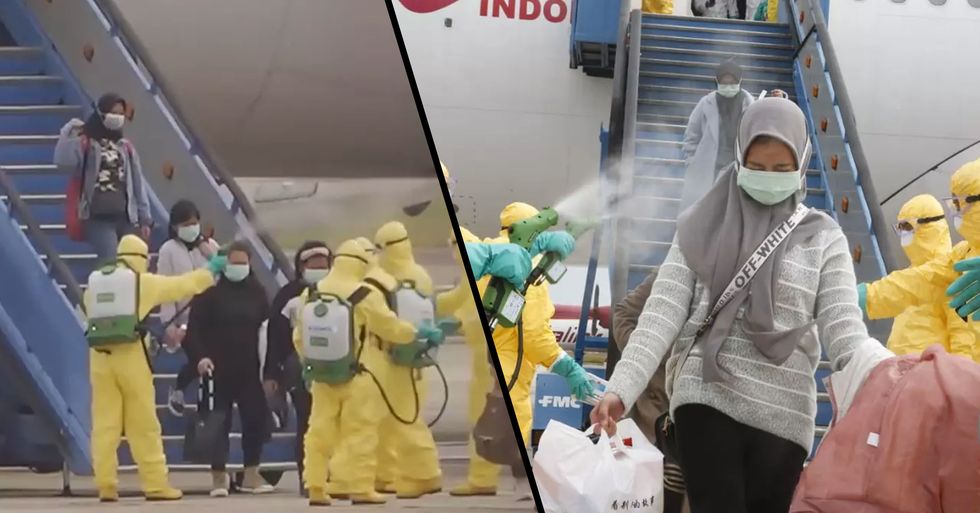 Airplane Passengers From Wuhan Sprayed Down With Disinfectant After Landing

Scroll to the end to see what protocols have been put in place to stop the spread of the virus.

The virus continues to spread, and traces of the disease have already been discovered and in at least 23 other countries including Thailand, South Korea, Taiwan, Saudi Arabia, and Japan.

There are currently eleven active cases being monitored in the US, but because of the speed of mutation, it has also spread across the nation to California. A young girl is currently hospitalized with the virus and is showing no signs of recovery.

But, despite the worrying chances of being infected...

Some have decided to take the risk and travel to and from the country anyway.

And the majority have been donning face masks in an attempt to lessen the chance of catching or spreading the virus.

But some people have taken some rather interesting tactics to avoid infection...

And we're not talking about face masks or hand sanitizers, here.

Things have been getting quite silly.

Various travelers have been spotted going to extreme lengths to avoid catching the virus... Including this woman who, rather foolishly and rather dangerously, put a giant plastic bag over her head.

An entire family was captured, standing patiently in a check-in queue, while all wearing giant plastic bags that covered their heads and bodies.

Some opted for giant plastic bottles...

A woman and her child were seen walking casually through the airport... While wearing massive plastic bottles over their upper bodies.

And this woman doubled up...

You can never be too safe, right?

Obviously, these methods are not effective ways of avoiding the virus.

No amount of plastic will protect you from the coronavirus, sorry.

It is probably best to ditch the plastic...

And all other plans to travel in and around China. The coronavirus incident is still developing, and we will bring you updates throughout its progress.

The Indonesian government has put protocols in place.

via: MINISTRY OF FOREIGN AFFAIRS OF THE REPUBLIC OF INDONESIA

Indonesian passengers getting off a plane from Wuhan were sprayed with disinfectant by officials in hazmat suits.

Travellers were doused with the disinfecting liquid.

via: MINISTRY OF FOREIGN AFFAIRS OF THE REPUBLIC OF INDONESIA

Footage has been shared showing people having flown in from Wuhan - where the coronavirus outbreak started - the group of people arrived in the Indonesian city of Batam.

The travelers will spend the next fortnight in isolation.

All passengers showing signs of being unwell were transported to a military base on Natuna Island.

The Indonesia Ministry of Foreign Affairs gave a press release.

There were 243 people aboard the flight from Wuhan. The press release stated, "all have gone through multiple health checks by the Chinese health authorities and the Indonesian Doctors Team at Wuhan International Airport following the health protocol, to ensure that they are all in good health."
"Four Indonesian citizens chose to remain in China due to family reasons, and three others were unable to meet the health requirements for flying."
All passengers have apparently been declared healthy according to World Health Organisation standards, the spokesperson for President Joko Widodo confirmed.

However, there is some hopeful news. Researchers from John Hopkins University say more people have recovered from the coronavirus than died. The university is tracking new confirmed cases of the disease.

The director of the Centre for Systems Science and Engineering, Lauren Gardner told CNN...

"We built this dashboard because we think it is important for the public to have an understanding of the outbreak situation as it unfolds with transparent data sources." She said, talking about the tracking map they built to track all confirmed cases.

"For the research community, this data will become more valuable as we continue to collect it over time."