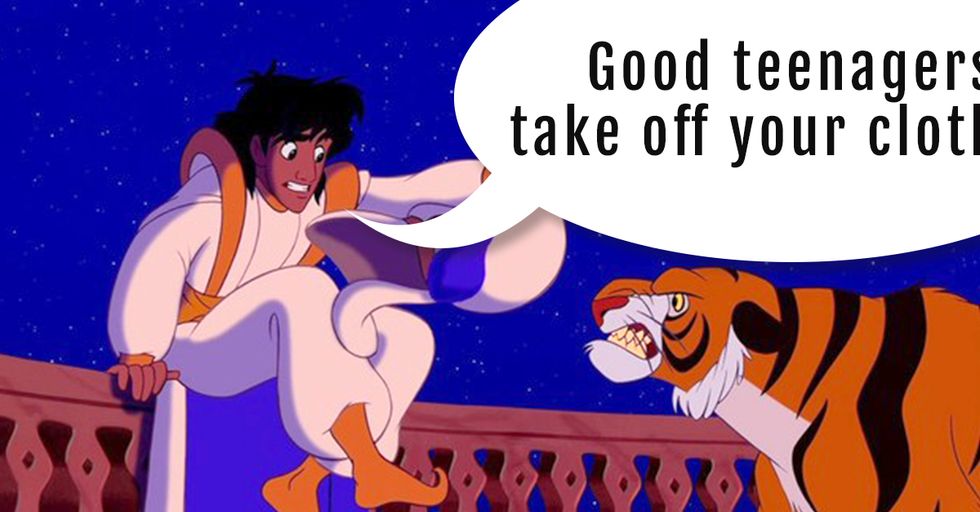 How deep does your Disney obsession run? My heart essentially pumps fairy dust. By age five, I'd watched Beauty and the Beast over 100 times and collected every single Disney princess Barbie stocked on my local Disney store's shelves. My absolute fascination by far, though, was Aladdin. What can I say? The street rat stole my heart.

Aside from producing magical, timeless stories, Disney productions also have a rumored history of deep-rooted, behind-the-scenes turmoil. Aladdin's production process was apparently no exception. From cunning feuds to sexy secrets, Aladdin's creative process seemed like a network drama in and of itself.

Keep scrolling to learn all the deep, dark secrets behind Disney's Aladdin.

To entice Robin Williams into signing on as the Genie, Disney instructed its animation team to animate the Genie performing their favorite lines of Williams’ comedy albums. How's that for appealing to an artist's ego?

via: Tumblr, On The Magic Carpet

Initially, Disney developed villainous Jafar as the hot-tempered half of the movie's Odd Couple-esque duo and Iago as its patronizing Brit. Eventually, the team swapped their personalities around, as Jafar’s constant temper tantrums made him seem less threatening.

Jasmine Had To Audition Twice

Midway through recording, Linda Larkin, who played Princess Jasmine’s speaking voice, had to re-audition for the role. Disney studio chief Jeffery Katzenberg wasn’t completely sure her tone sounded regal enough for the role. Thankfully, she proved him wrong, nailed the second audition, and finished the film.

Robin Williams as The Genie Changed the Voice Acting Game

Prior to Aladdin, A-list actors seldom lent their talents to voicing animated roles. Those jobs were typically thought best suited to professional voiceover talent. However, Robin Williams signing on to voice Aladdin’s Genie ushered in a new era of celebrity voiceover castings. Now, everyone from Tina Fey to Billy Crystal have voiced animated characters.

Aladdin's Dashing Looks Were Modeled After a Few Hollywood Hunks

Think Aladdin looks familiar? Disney instructed its animators to use Michael J. Fox and then Tom Cruise as inspiration for Aladdin's hot bod. His baggy pants were modeled after MC Hammer's signature style.

As Entertainment Weekly reported in 1992, Aladdin premiered during Thanksgiving weekend that year aggressively poised to not only please kids, but to also hopefully capture the hearts of their adult wranglers  – expanding Disney's appeal across generational divides. How? With quippy satire.

Due to a feud raging between Robin Williams and Disney, Dan Castellaneta (known to most as the voice of beloved The Simpsons lead character, Homer Simpson) voiced the Genie in Aladdin’s sequel, The Return of Jafar. The Genie also makes an appearance in season 20, episode 7 of The Simpsons.

Aladdin himself was actually voiced by actor Scott Weinger, otherwise known as Steve Hale, DJ Tanner's fridge-raiding boyfriend from the popular '90s sitcom Full House. Weinger even made a cameo as Aladdin in a Full House episode shot in Disney World. Holy crossover!

Late master comedian Robin Williams kept the jokes running on and on and on during his Aladdin recordings sessions. What I wouldn't give to have been a fly on the wall during those recording sessions...

And He's Not the Only One

Mickey Mouse isn't the only beloved Disney character who makes a cameo in Aladdin. The Little Mermaid's Sebastian, Beauty and the Beast's Beast, Pinocchio, and others also make brief appearances throughout the film. I guess it really is a small world after all.

Apparently whilst recording Aladdin, Robin Williams and his Hook director, Steven Spielberg spent tons of time corresponding by phone. During their calls, Williams gifted Spielberg with much needed comic relief, as Spielberg was in the middle of production on Schindler’s List.

Disney artists trekked to the nearby Los Angeles Zoo whilst developing their designs for Aladdin's faithful companion, Abu. The team videotaped the zoo's community of capuchin monkeys to better understand how their star's furry friend should swing around during the film.

Prior to Aladdin, all of Disney's princess-based fairytales starred European-based princesses. Jasmine, however, hails instead from Arabia. Yay diversity!

Jafar Was Modeled After Maleficent

Andreas Deja’s Jafar design closely parallels that of 1959 Disney classic, Sleeping Beauty’s Maleficent. They both transform into creepy reptiles. They are both BFFs with birds. They both specialize in evil magic. They both carry staffs. #twins

Scroll through the movie's credits, and you'll see that 513 different folks lent their talents to Aladdin.  Do you think they each got 75 golden camels?

While imagining Jafar’s snarky parrot pal, Iago, sounding like anything other than Gilbert Goddfrey feels just plain wrong, Goddfrey was, in fact, the producers' third voice choice. Disney only offered Goddfrey the role after both Danny DeVito and Joe Pesci each passed.

Princess Jasmine and Mulan Were Voiced By the Same Actress

Both Princess Jasmine and Mulan's singing voices were each brought to life by Singer Lea Salonga. Salonga has more recently appeared on the CW's musical sitcom, Crazy Ex-Girlfriend as Aunt Myrna.

While the film's score did win Disney a few Oscars, Robin Williams improvised so much of the film’s dialog that its script was actually disqualified from Best Adapted Screenplay Oscar contention. Their loss, our gain.

Prior to Aladdin, Disney princes had been pretty generically handsome but personality-less specimens. With Aladdin, Disney explored how to develop a more three-dimensional prince who was, aside from good looking, also scrappy, charming, and dare I say sexy. Essentially, more the type of guy with whom a princess could actually fall in love.

Aladdin’s look and feel was heavily influenced by 20th century caricaturist and painter Al Hirschfeld’s work. While previous Disney animated works had tended toward painstakingly detailed realism, Aladdin’s style instead incorporated a more organic, two dimensional, Hirschfeld-style feel. In an LA Times interview, Hirschfeld said, "I'm very flattered that the animators say they were influenced by my use of line. But art isn't a 50-yard dash — it's more like a relay: You keep handing it on to somebody else, and there's no beginning or end to it. I didn't invent the line: That simplification that communicates to a viewer goes back to the cave drawings at Altamira."

Aladdin was the first animated movie to gross over $200,000,000. This huge win paved the way for other incredible films like The Lion King, Frozen, and Zootopia to continue breaking box office records.

Frank Welker, the voice of Abu, also voiced another beloved cartoon character — Scooby Doo. Can't you just imagine them both gorging on a box of Scooby Snacks?

Film critics Siskel and Ebert nearly made animated cameos in Aladdin. Disney wanted them to give Prince Achmed (Jasmine's initial suitor) a thumbs down. However, the famed film critics turned down the opportunity. Instead, the film's writers/directors, Ron Clements and John Musker, added their own likenesses into the scene.

Many believe that during the movie's famed balcony scene, Aladdin says, “Good teenagers, take off your clothes." However, that's actually not his dialog at all. His line is actually directed toward Rajah the tiger, saying "Good kitty, take off and go, go on."

Aladdin Was Going To Have a Mom

Aladdin and his mom were even going to sing a song together called “Proud of Your Boy." However, as the creative process soldiered on, she and the song eventually landed on the cutting room floor.

The Genie Is an Outfit Repeater

The Genie’s Hawaiian shirt and Goofy hat outfit at the end of the movie were actually a nod to an outfit Robin Williams wore during an 80s Disney/MGM Studios tour video. The inside jokes never end!