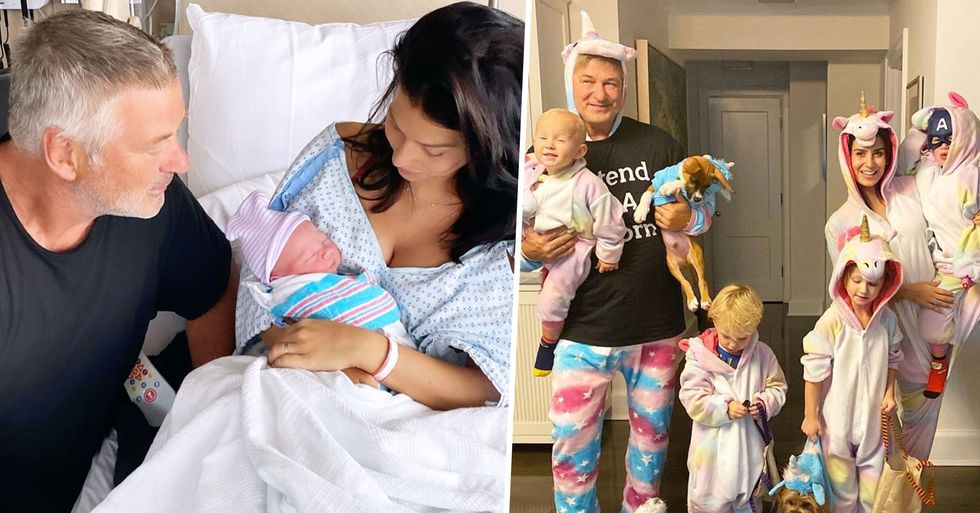 Hilaria and Alec Baldwin have just welcomed their 5th child after suffering multiple miscarriages over the year.

Alec and Hilaria Baldwin have together for nearly a decade.

And, despite their twenty-six-year age gap, the couple couldn't be more in love.

The couple who have 4 kids have gone through a tough time this year...

But things are looking up for the couple as they welcome their 5th child.

Earlier this year, Alec dedicated an Instagram post on their anniversary and explained how they first crossed paths. "8 years ago, I wandered into Pure Food and Wine on Irving Place, on an unseasonably warm February evening," he wrote. "My friend, @bocartist and I sat down (outside!) and as I turned to my left I saw a woman who would change my life. Entirely."

Alec couldn't help himself, and he had to go over and talk to her. And Hilaria told The New York Times that Alec's opening line was actually pretty smooth. "I was standing near the door with my friends when he walked up and took my hand and said, ‘I must know you,’" she recalled. "'You must know me?'" she replied, after which “he gave me his card."

Alec was quite the gentleman.

When talking about the early days of their relationship with Beach magazine, Hilaria recalled how it took Alec 6 whole weeks to kiss her. "He shook my hands for 6 weeks. We’d have the most romantic dinner date, and afterward, he’d drop me off at my house and shake my hand... My girlfriends would call me and say, ‘Anything yet?’ and I’d say, 'Nope, nope, nope.' Then they’d say, 'Maybe he just wants to be friends.'"

Despite their slow start, the rest of their relationship began to move very quickly. 5 months into dating, the pair got their first apartment together, and the talk of marriage quickly followed.

They tied the knot a year after meeting.

They have gone on to have 4 children together.

Hilaria gave birth to their first baby daughter, Carmen Gabriela Baldwin, on August 23, 2013. And, less than two years later, on June 17, 2015, their son Rafael Thomas Baldwin was born. Leonardo Ángel Charles Baldwin followed on September 12, 2016, and, most recently, their third son Romeo Alejandro David Baldwin was born on May 17, 2018.

And Hilaria has also taken Alec's daughter, Ireland, under her wing.

Hilaria took to Instagram to share her love for her stepdaughter. "I rarely address being a stepmom, but it is part of our family. I always want to deal with it with such care... I wanted to make sure I did right by the family I was stepping into when I married Alec." She wrote, "I love my stepdaughter as much as I love my biological children and I become a mommy lioness when I see comments that insinuate otherwise."

But it hasn't all been smooth sailing.

In April this year, Hilaria announced that, after falling pregnant with their fifth child, she had suffered a miscarriage.

Sharing of a photo of herself stood cradling her stomach in her underwear, Hilaria wrote, "I always promised myself that if I were to get pregnant again, I would share the news with you guys pretty early, even if that means suffering a public loss."

By sharing her experience, Hilaria hoped to break down the stigmas around miscarriages.

And she explained that, despite the embryo having a heartbeat, it wasn't strong enough to survive. "I want to be a part of the effort to normalize miscarriage and remove the stigma from it." She explained in her post, "So, this is what is going on now: the embryo has a heartbeat, but it isn’t strong, and the baby isn’t growing very much. So we wait—and this is hard. So much uncertainty...but the chances are very, very small that this is a viable pregnancy."

Understandably, it's been a rough few months for the couple.

So, when Hilaria fell pregnant again in September, just 5 months after their devastating loss, the excitement was in the air once more. She shared a photo of her scan, writing: "Tiny person is growing wonderfully."

Hilaria was visibly overjoyed with the news.

The expectant-mom shared regular updates on her Instagram account, and even celebrated getting through her first trimester, writing, "Because this baby deserves belly pics too! GUYS!!!! I made it through my first trimester!!!!"

So it was a shocking blow when disaster struck the Baldwins once more.

For the second time in just 7 months, Hilaria suffered another miscarriage. She was just 4 months along.

She posted a video of herself laid in bed being comforted by her daughter, Carmen.

Heartbreakingly, 6-year-old Carmen can be heard asking how long it will be until the baby arrives.

And, visibly in tears, her mom replies: "I don't know. We're going to try really hard."

Carmen then leans in to comfort her mom...

And snuggles up to her, giving her a soft kiss on the cheek. A visibly emotional Hilaria then says: "Thank you for saying you're sorry. Mommy's sad."

The video is incredibly moving.

Captioning her post, Hilaria wrote: "We are very sad to share that today we learned that our baby passed away at 4 months." She explained how the video was filmed for Alec, but it was decided to be the best way to share the news with her 666K followers, too. "I told Carmen and took this so I could send it to Alec. I guess this is a good way to share it with you too."

But, despite her heartbreaking loss, Hilaria acknowledged how lucky she and Alec are.

Because they still have their 4 beautiful children. "We also want you to know that even though we are not ok right now, we will be. We are so lucky with our 4 healthy babies—and we will never lose sight of this."

After the tough time they've been through this year, the couple has finally welcomed their fifth baby!

The happy couple announced the birth on Hilaria's Instagram...

“We had a baby last night," the thirty-six-year-old captioned the picture. “He is perfect and we couldn’t be happier."

Hilaria announced the news in April...

“I don’t have the words to express how this sound makes us feel," the “Mom Brain" podcast co-host captioned an Instagram video of herself listening to her baby-to-be’s heartbeat. “Just got the great news that all is well and all is healthy with this little munchkin. I wanted to share this with you. Here we go again."

She announced that she knew she was pregnant as soon as she began to feel “stupid."

She explained: “That’s my first hint. I’m somebody that is very physically capable. I can do my yoga, I can dance, I can do this, I can [do] that, [but] I become a disaster. I bump into things."

We're so happy for the couple!

For more baby news, keep scrolling for what one woman has called the "worst baby name" ever...