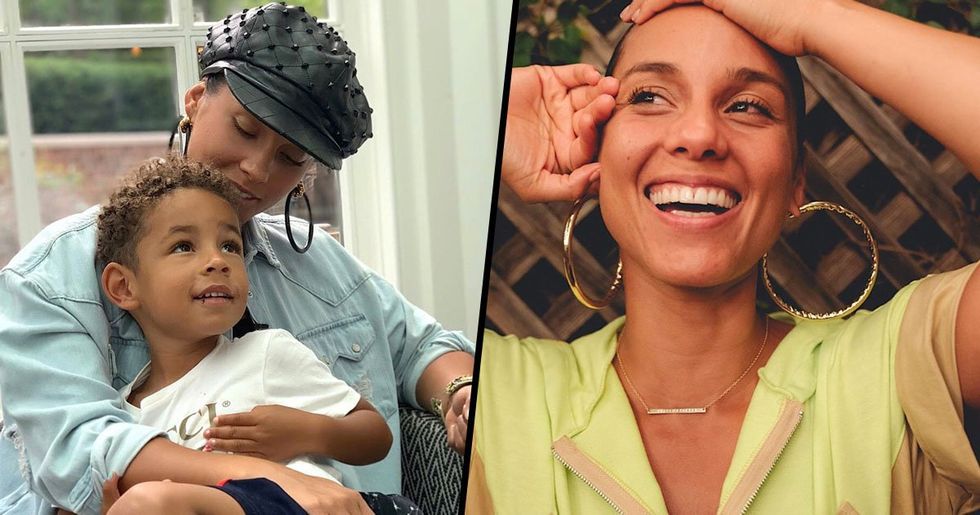 Alicia Keys seems to have divided the public with her recent comments.

The "New York" hitmaker has been both slammed and praised this week for her alternative parenting.

Alicia Keys is a mom to two children, Egypt and Genesis.

Controversy erupted this week when thirty-eight-year-old Keys made comments about getting her son's nails painted.

Alicia Keys is afraid to speak her mind.

The hitmaker has had a successful music career and has a wide-reaching fan base.

Alicia isn't afraid to be political.

The comments made this week are not the first time Keys had made her political and social views known.

Alicia Keys and Swizz Beatz have a strong relationship.

Together they parent their 2 children, Egypt and Genesis, as well as co-parenting Swizz Beatz's 3 other children from previous relationships.

Alicia and Swizz Beatz make no secret of how important their kids are to them and they always ensure to put them first.

Swizz takes real joy in watching his kids grow up.

Unlike a lot of successful rappers, Swizz Beatz isn't afraid to fill his Instagram profile with posts about his kids.

Parenting is a journey...

It's one that Alicia Keys and Swizz Beatz seem to be relishing. It's surprising to think that anyone would accuse this pair of being bad parents...

Ever since Alicia spoke out there's been trouble.

The comments she made about her son have certainly raised a fair few eyebrows.

What are you chattin' Alicia?

Some people have accused Keys of speaking mumbo jumbo.

Keys claimed that she took her son to get his nails painted. A lot of people thought that this was not okay.

Alicia Keys does what she wants.

This is not a lady that is afraid to speak her mind and live life her way.

Some people really were ready for a fight.

Alicia Keys' Instagram is now awash with haters slamming the singer for what she said and accusing both her a Swizz Beatz of being bad parents.

Alicia's ready for the fight.

Obviously the singer wouldn't have publicly made the comments if she wasn't ready to stand by them. Alicia Keys is probably glad she's opened up a conversation about gender politics, even if some of the responses have been pretty harsh.

There are people on Alicia's side...

Alicia Keys is an inspiration to many, and her attitude towards parenting is a source of encouragement to other parents trying to raise their children against society's expectations.

The backlash was a surprise to some.

Instagram worried about some likes they need to do something about that comment section. I just read the comments o… https://t.co/nW73lAvOUC
— Pastor Holy Whore (@Pastor Holy Whore)1573396409.0

This hasn't phased Alicia, though, as she hasn't retracted anything she said.

Keys doesn't want to tell her sons what they should think and feel. Alicia is concerned that gender stereotypes and norms force children to feel as though they must think or feel a certain way, even if that is not truly how they feel inside.

Alicia received praise for speaking out.

It appeared that despite the haters, some parents agreed with Keys and are glad she spoke out.

You can judge for yourself whether Alicia's comments were controversial.

Personally, I think she's got the right idea. Our children are the future, so why not give them the chance to break away from archaic gender stereotypes?

If you don't wanna take my word for it...

Listen to Jamie Foxx. Now you're not going to disagree with Jamie Foxx, are you? Surely not! Continue scrolling to read why Alicia Keys decided not to wear makeup to The Grammys (obviously, because she's a badass trend-setter).