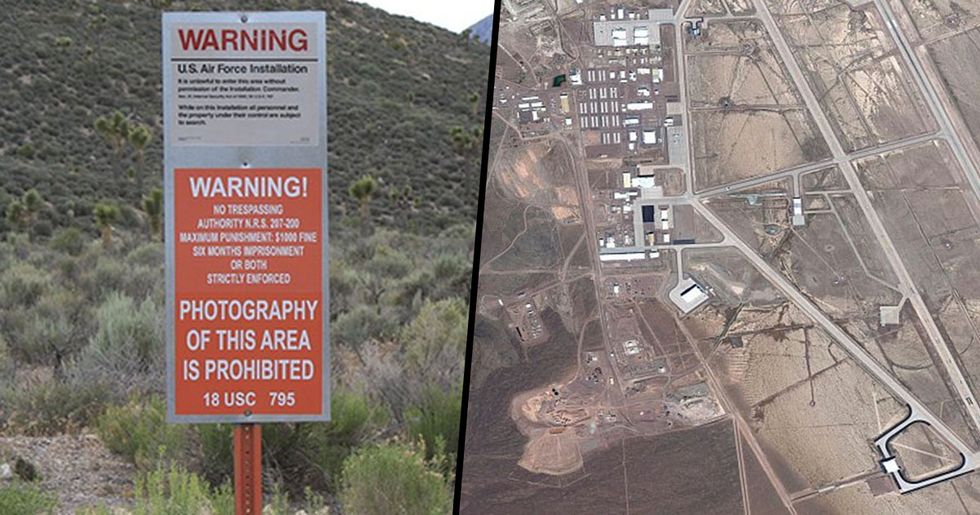 You may or may not have heard, but in the last few months, the world has melted down into an Area 51 frenzy.

The top-secret military base has long been a favorite for conspiracy theorists all over the world, with many people speculating covered-up government work and intel on UFOs and out-of-space weapons.

But never before has it had this much attention. In June, a Facebook group inviting people to storm the compound accumulated over 1.5 million members, who all vowed to break into the facility on September 20th this year.

And, despite the Facebook group getting temporarily shut down, and the FBI getting involved, people are still curious as to what really goes on behind the gates of Area 51.

And, now, we may have the answer.

One self-titled "Alien Hunter" has claimed to have spotted actual UFOs in the compound using Google Earth. Yes, it's the proof that we've all been waiting for. Keep scrolling to see his video, which outlines the suspicious images caught from above the compound...

What exactly is Area 51?

Area 51 is a United States Air Force facility which is a classified and remote detachment of the Edwards Air Force base, located at Groom Lake in the south of the Nevada desert. Or so they tell us...

Like any top-secret military facility, few people are allowed to enter the premises, which spurred more suspicion over what goes on within the compound. The borders of Area 51 are not fenced, but are marked with orange poles and warning signs which state that security is authorized to use deadly force on people who insist on trespassing. Yikes.

And rumors of the compound's activities have been circulating for years.

Because we’ve never really trusted our government, have we? The speculations continued, with some people making outlandish claims that the facility was building and repairing crashed alien spacecraft rather than military planes.

In June this year, one legendary Facebook user created a Facebook group titled, "Storm Area 51, They Can't Stop All Of Us." The group invited people to gather at the compound on September 20th and storm it because, well... they can't stop all of them, can they?

The break-in had been carefully plotted out...

The group’s creator, and overall master strategist, Matty Roberts, from California, outlined his plan of action and, let’s just say, there is plenty of “pebble throwing," “drywall kicking," and “Naruto running" involved.

And a strict plan of action was proposed.

The ringleader of the group stated in the description: “We will all meet up at the Area 51 Alien Center tourist attraction and coordinate our entry. If we Naruto run, we can move faster than their bullets. Let’s see them aliens." For those who don’t know, “Naruto running" is a meme inspired by an anime character called Naruto Uzumaki, who has a distinctive running style. And a "Kyle" is buff, emo teenager who punches holes into drywall while drinking Monster Energy. You're welcome.

And, when I say quickly, I mean over 1.5 million people signed up and pledged to storm the notorious compound.

And, despite Matty explaining to the world that it was only a joke...

Some of the most dedicated alien-enthusiasts took the event very seriously and still intended on storming the compound, despite the risk of being gunned down by the military.

But, finally, the plans were brought to a standstill.

Because Facebook took down the original page. After the page becoming a worldwide sensation, that must have hurt.

Matty, and the rest of the world, were outraged by the removal of the page.

He shared a screenshot of a notification that he claims to have received from Facebook that said that the event had “been taken down by Facebook" because content posted to this event “went against" the site’s community standards.

However, the page was restored...

And a full Area 51 festival was launched. The newly restored page has a link to the website, Storm Area 51, which has more information about Matthew’s festival. The event looks like it will be packed with sci-fi fun, and there’s even Naruto running-related merchandise for the truly dedicated followers to get their hands on.

Matty created the festival to encourage people to avoid the actual Area 51 compound.

Probably to avoid getting any blood on his hands. The website explains: “We’re meeting in the town of Rachel, NV- the closest town to Area 51! We traveled out into the desert to speak directly with land-owners about creating an event for people to celebrate the unnatural… they’re totally on board! They’ can’t stop us all from meeting out there… let’s have fun! Music, camping, and arts will occur over the weekend until Sunday – we hope to see you there!"

Yet, despite all of Matty's efforts...

People still seem intent on raiding the compound. After the event had been removed, one Facebook user wrote: “We don’t need an ‘event page’ to do work. Everyone is still down, Facebook or not," while another said: “F*** that! We’re still going."

But now, it seems that we may not have to storm the compound to get answers, after all.

Because one avid extraterrestrial enthusiast claims to have solid evidence that there are actual, real-life UFOs inside Area 51.

The self-proclaimed "Alien Hunter" claims to hold the answer to Area 51's secrets...

By comparing old and new Google Earth images of the compound.

He insists that there is evidence of a UFO parked within Area 51.

The alien hunter, or Scott Waring as he's known as in the real world, claims that he found a spaceship at Area 51 by comparing old maps from Google Earth.

In the later images, the UFO mysteriously disappears...

There’s a circular object that’s over 100 feet wide seen in an image from 2010, but, if you look at a later picture, the circular object mysteriously vanishes, and is replaced by a massive hangar hooked up to a bunch of boxes that look like air conditioners. Pretty suspicious...

You can watch his full video here.

Where he explains his findings a lot better than I just did.

But we may have to wait a little longer to see those aliens...

Because Area 51 is heavily guarded by armed guards. And, come on, guys. Is any alien worth getting shot over? For more Area 51 content, keep scrolling!