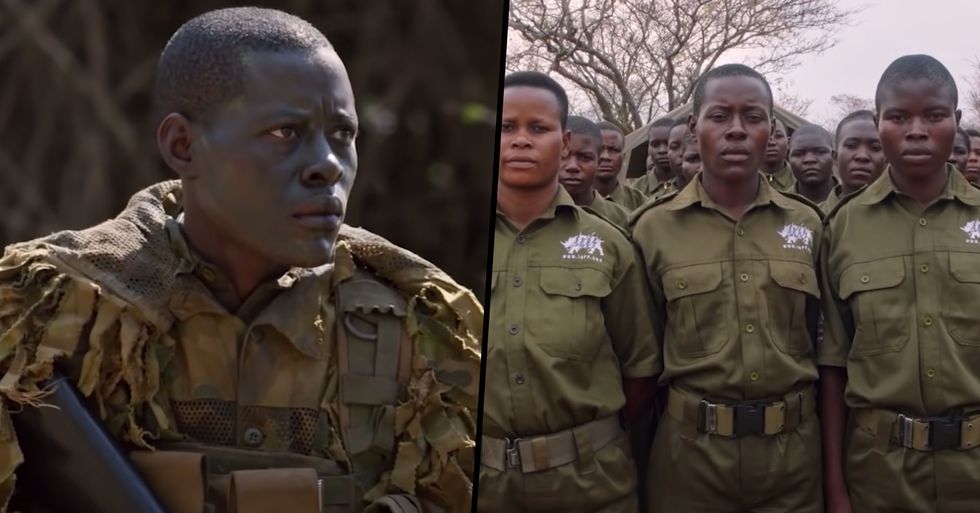 An all-female army has been working tirelessly together to protect their elephants from poachers in Zimbabwe and they're truly inspiring...

The elephant is a truly majestic species.

With it being one of the largest mammals in the world, elephants are greatly respected in many different cultures.

But sadly, these majestic creatures have faced years of hardship.

Elephants are usually at the top of a tourist's list when visiting countries across Asia and Africa, and locals have been cashing in on the exploitation of these animals for decades now.

And the likes of anti-poaching campaigns, breeding programs, and wildlife organizations have been helping replenish the population of these majestic creatures.

But there is one organization that stands out more than the others...

And that's the Akashinga.

So, what exactly is the Akashinga?

The Akashinga is an arm of the nonprofit International Anti-Poaching Foundation, which manages Zimbabwe’s Phundundu Wildlife Area - a 115-square-mile former trophy hunting tract in the Zambezi Valley ecosystem. They protect their elephants, rhinos, and lions from poachers, cyanide, and snare traps.

The greater region has lost thousands of elephants to poachers over the last two decades...

And the Akashinga (meaning "brave ones" in the Shona language) patrol Phundundu, which borders twenty-nine communities.

But the unique thing about the Akashinga?

The organization consists of an all-female team.

They are all highly-trained before going into the outback...

And many of the Akashinga's members are survivors of sexual assault and domestic abuse.

The Akashinga's founder Damien Mander, a former Australian army sniper, says the group's success is in its receipts.

Since 2017, Akashinga rangers have made hundreds of arrests and helped drive an 80 percent downturn in elephant poaching in Zimbabwe’s Lower Zambezi Valley.

And on World Elephant Day, Akashinga: The Brave Ones was released by National Geographic as a short documentary to outline the hard work that these women put in day in and day out.

2 of the rangers featured in the documentary recently spoke out about their lives as Akashinga women.

Speaking to Elle, Nyaradzo Auxillia Hoto and Petronella Chigumbura opened up. Hoto escaped an abusive marriage in 2017 and since joining, she has risen up in the ranks and now works as a sergeant. Chigumbura is a single mom of 2 and is working tirelessly to provide for her family.

The women spoke candidly about the animals they save every day.

"The way I love my kids is the same way I love wildlife, and this has helped me to create a strong bond with the animals. Akashinga ladies just live as a family with the wildlife, Chigumbura explained. "We’ve got a motherly, caring heart. I don’t want to see any cruelty inflicted on any animal. It pierces my heart. Because our unit is a community-based program, I once had to arrest one of my relatives. I had no option but to arrest them because it's my top priority to save wildlife."

Africa's wildlife has been conditioned to fear humans...

"Animals were afraid of us when we first started to protect them. They only thought of being shot. Animals shouldn't suffer or feel pain for the sake of our needs and desires. They have the right to live and enjoy their life," Hoto said. "They also have an aesthetic value, a natural beauty and artistic value that I find so lovely. When justice is served in terms of the arrests and convictions…Now the animals feel secure and we have a strong bond with them. We are like family."

Even though these incredible women have made such a huge difference for the elephants and wildlife of Zimbabwe...

So much more still needs to be done. "Educating the community on how important wildlife and nature is can be a great step toward saving more animals. Supporting community members with different projects, since most poachers are driven by poverty and hunger, can help them sustain their families."

You can watch the documentary on the Akashinga here...

And make sure to keep on reading to learn about the amazing dogs that have been trained to protect rhinos from poachers...