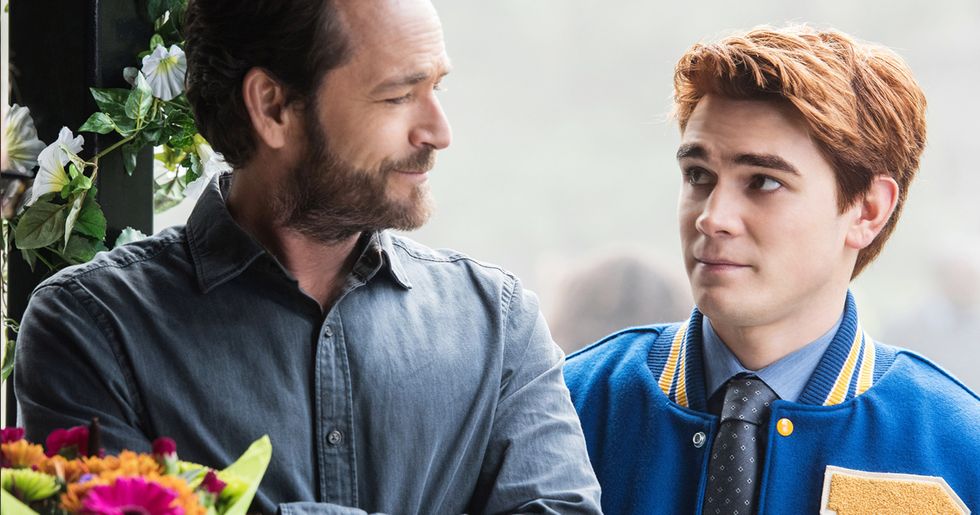 All Future Episodes of 'Riverdale' Will Be Dedicated to Luke Perry

Tributes are pouring out over social media to mourn the loss of actor Luke Perry. The Riverdale and former 90210 star passed away on Monday, March 4, after suffering a massive stroke the previous week. Perry's friends, acquaintances, fans, and coworkers have nothing but kind words for him. So now, while grieving, the Riverdale cast and crew are finding ways to honor their friend.

Many of Riverdale's other stars have already taken to social media with words of their own. But the show as a whole is also making sure to honor Perry. Its creator has announced that all future episodes of Riverdale will be dedicated to Perry. It's a testament to the impact he left on-set and on-screen.

So keep reading and see just how much the Riverdale crew loved their co-star. This includes a touching statement from show creator Roberto Aguirre-Sacasa and younger actors that Perry mentored!

Luke Perry passed away a couple of days ago.

He died at St. Joseph's Hospital in Burbank, surrounded by his family.

His family made the difficult decision to remove his life support. Perry's rep released a statement, which reads as follows:

Actor Luke Perry, 52, passed away today after suffering a massive stroke. He was surrounded by his children Jack and Sophie, fiancé Wendy Madison Bauer, ex-wife Minnie Sharp, mother Ann Bennett, step-father Steve Bennett, brother Tom Perry, sister Amy Coder, and other close family and friends. The family appreciates the outpouring of support and prayers that have been extended to Luke from around the world and respectfully request privacy in this time of great mourning. No further details will be released at this time.

The actor remained "under observation" for five days, to no avail. He is survived by his daughter, Sophie, and son, Jack.

Perry had been in the core cast of "Riverdale" since the show began.

In 2016, Perry made his Riverdale debut as Fred Andrews, father of  Archie Andrews (played by KJ Apa).

He had previously been known as a teen heartthrob.

In the '90s, Luke Perry made his rise to fame on Beverly Hills, 90210 playing fan favorite Dylan McKay.

Upon Perry's death, "Riverdale" shut down production for the day.

We are deeply saddened to learn today about the passing of Luke Perry. A beloved member of the Riverdale, Warner Bros. and CW family, Luke was everything you would hope he would be: an incredibly caring, consummate professional with a giant heart, and a true friend to all. A father figure and mentor to the show’s young cast, Luke was incredibly generous, and he infused the set with love and kindness. Our thoughts are with Luke’s family during this most difficult time.

Perry was first rushed to the hospital for treatment on February 27; tragically, the damage he'd already suffered was too great.

I’m finding it hard to grasp that he will no longer be around to give long hugs and share his wisdom and kindness w… https://t.co/naonx0Z6vM
— Lili Reinhart (@Lili Reinhart)1551740772.0

Earlier, Reinhart had simply posted a black-and-white text image to her Instagram story, writing, "I can barely find the words. I am devastated. We all are."

Friends and fans alike were shocked by his sudden passing; little had been revealed about Perry's condition beforehand.

It's clear that Perry was loved by the entirety of the cast and crew--and that he loved them, too.

Whatever the writers have to do with Perry's character now that he's gone, we're sure they'll do him justice.

Ross Butler left "Riverdale" after season 1, but had plenty to say of Perry.

We lost an original today. A legend. He paved the way for us. Although we didn't work much together, he always greeted me with a smile, had a joke ready, and a story to tell. Rest in peace, Luke. Rest easy. -ross butler

Molly Ringwald expressed her sorrow, too.

The actress was Perry's fellow cast member; she plays Mary Andrews on Riverdale.

Perry was a mentor to many of the younger cast.

Love you my brother. -casey cott

The two both played parents on Riverdale. Perry was Frank, and Amick plays Alice Cooper, the mother of Betty.

Cole Sprouse posted this when Perry was first hospitalized.

Sprouse is also a professional photographer, so it's not surprising he got this touching candid shot of Perry.

Madelaine Petsch had much love for Perry as well.

Luke, I am so lucky to have known you & gotten so close to you these last 3 years. You were such a light in our lives; the most genuine & kind soul I will ever know. From day one of this show, you were the most amazing mentor to me. Thank you for teaching me not only about this industry but also about kindness and being a family and how to foster and nurture those important relationships… you were the absolute best at that. I love you Luke, you and those sweet forehead kisses will forever be missed. -madelame

So it's not surprising that all future "Riverdale" episodes will be dedicated to Perry.

Then, Aguirre-Sacasa made the announcement in a follow-up post.

Going through pictures on my way to set. From the early days. With Luke in the middle. Our heart, always. Tonight’s episode of #Riverdale finds Fred doing what he does best--helping Archie. It is dedicated to Luke, as all episodes will be for the rest of our run. -writerras

A new episode of Riverdale is about to air.

And fans are anticipating the rollercoaster of emotions that will come with it, after learning of Luke Perry's death.

Perry first made his name on 90210, and his old castmates had nothing but good things to express about him.

Dearest Luke, I will forever bask in the loving memories we've shared over the last thirty years. May your journey forward be enriched by the magnificent souls who have passed before you, just like you have done here for those you leave behind. God please give him a seat close to you, he deserves it. -Ian Ziering

"I am in shock. Heartbroken. Devastated by the loss of my friend. I have so many memories with Luke that make me smile and that are forever imprinted on my heart and mind," she told PEOPLE. "Luke was a smart, quiet, humble and complex man with a heart of gold and a never-ending well of integrity and love. Luke reached out to me during my cancer journey and we picked right back up, albeit older and wiser, but that connection remained intact."

Doherty also spoke of the things Perry had treasured in life.

She told PEOPLE about how much Perry loved his family, saying that he "raved about his kids and how proud he was of them. They were his heart and for him, his biggest accomplishment."

Luke Perry's two children have also spoken out about their father's passing.

Sophie, his 18-year-old daughter, posted to Instagram the day after Perry died. Jack, his 21-year-old son, only just broke his silence today.

A lot has happened in this past week for me. Everything is happening so fast. I made it back from Malawi just in time to be here with my family, And in the past 24 hours I have received an overwhelming amount of love and support. I cannot individually respond to the hundreds of beautiful and heartfelt messages, but I see them and appreciate you all for sending positivity to my family and I.  -lemonperry

Sophie also thanked everyone for their support.

I’m not really sure what to say or do in this situation, it’s something you aren’t ever given a lesson on how to handle, especially when it’s all happening in the public eye. So bear with me and know that I am grateful for all the love. Just, being grateful quietly. -lemonperry

Perry's son Jack posted a tribute of his own.

He was a lot of things to a lot of people. To me, he was always Dad. He loved supported me in everything, and inspired me to be the best that I could possibly be. I’ve learned so much from you, and my heart is broken thinking about everything you won’t be here for. I’ll miss you every day that I walk this earth. I’ll do whatever I can to carry on your legacy and make you proud. I love you Dad. -boy_myth_legend

Well-wishers for the Perry family should keep this in mind:

Rather than being gifted with flowers, the Perry family has asked that donations be made to Fight Colorectal Cancer and St. Jude’s Children’s Hospital instead. Share this story with of Riverdale's--and Luke Perry's--fans.