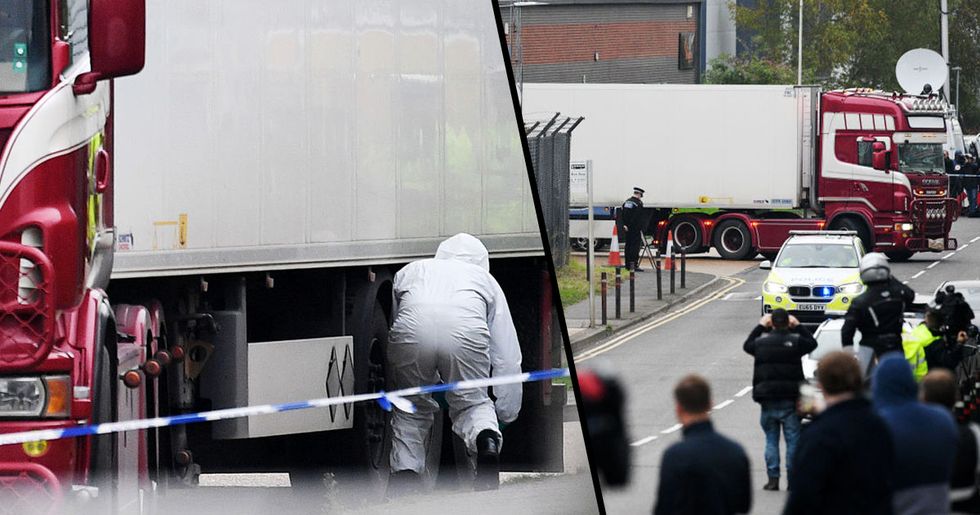 All 39 People Found Dead in Haulage Truck Were Chinese Nationals

Horrifying news came in from the United Kingdom yesterday morning after thirty-nine dead bodies were discovered in the back of a haulage truck.

It has been confirmed that the driver of the truck has been arrested on suspicion of murder and the investigation is ongoing.

In an official statement, the police explained: "Emergency services attended but sadly all 39 people inside the container had died. Early indications suggest that one of these people was a teenager, the rest are believed to be adults."

But it was widely assumed that the victims, while on the lengthy journey, suffocated inside the truck. This, however, was not discovered to be the case.

The type of truck supported the theory...

Many pointed out that, from the pictures, the vehicle looked like a refrigerated truck - these types are completely airtight once closed, meaning there would have been no air supply for the thirty-nine people inside.

And he said that it had not at all been confirmed whether the truck was registered in the country. "There is also no indication of the nationality of the human bodies found in the truck," he said. It has since been discovered that the truck actually came from Zeebrugge, a Belgian port.

We don't know much about the victims.

But it was initially believed that they were all either immigrants who were being smuggled into the U.K. illegally...

Antislavery.org defines trafficking as the act of harboring or transporting people into a situation of exploitation through the use of violence, deception or coercion, and then forcing these people to work against their will.

The U.K. is a destination country for men, women, and children primarily from Africa, Asia, and Eastern Europe who are subjected to human trafficking for the purposes of sexual slavery and forced labor, including domestic servitude.

They said in their statement: "This is an absolute tragedy and a very sad day for Essex Police and the local community. We will continue to work alongside many other partner agencies to find out what led to these deaths."

Pictures of the man arrested on suspicion of murder have been released.

Mo Robinson is a twenty-five-year-old from Portadown, Northern Ireland. The young father-to-be works for a haulage firm.

Mo's family have claimed that they are completely in the dark about the situation.

His partner’s brother reportedly told Belfast Live that they hadn’t “heard from him" and “don’t know what is going on."

Officers in Northern Ireland are investigating the deaths.

The National Crime Agency reportedly said that it was working to identify "organized crime groups who may have played a part."

Councillor Paul Berry said that the village of Laurelvale in County Armagh, home to the Robinson family, was in "complete shock."

He also said that Mo Robinson's father had learned of his son's arrest on Wednesday through social media. "The local community is hoping that [Mo] has been caught up innocently in this matter but that's in the hands of Essex Police," he said. "We will leave it in their professional hands to try to catch the perpetrators of this."

It remains unclear when, exactly, the victims were placed in the container.

Shaun Sawyer, the National Police Chiefs Council lead for modern slavery and human trafficking, said that forces had prevented thousands of deaths, but "tragically, for 39 people that didn't work yesterday."

It has been reported that the thirty-nine victims were Chinese nationals.

And it is understood that they froze to death while inside the refrigerated vehicle.
40%