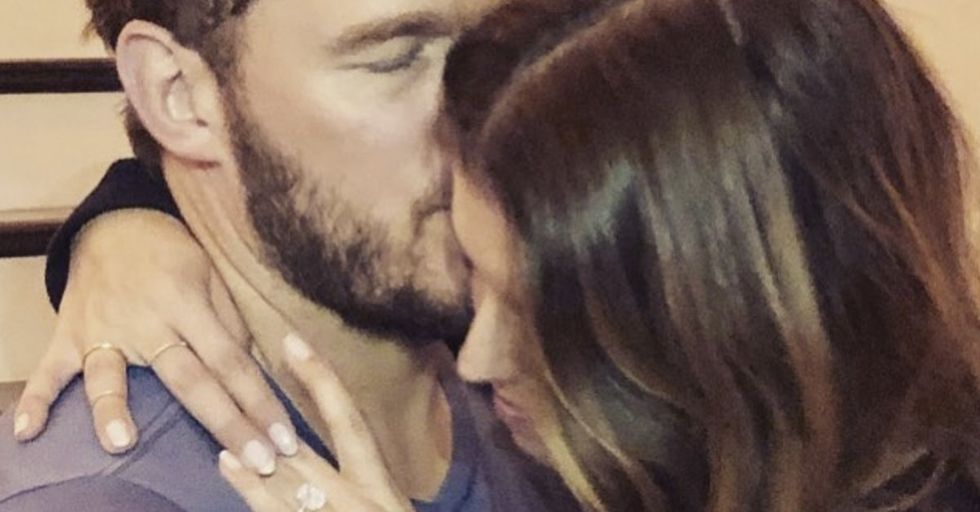 All the Celebs Who've Gotten Engaged in 2019 So Far

Love is in the air and wedding bells will soon be ringing for these celebrity couples that have gotten engaged this year.

We are only three months into 2019 and already we have many celebrity weddings to look forward to. For these celebrities, red carpet questions have gone from "Who are you wearing?" to "What are your wedding plans?"And honestly, I would also like to know.

When it comes to entertainment, one of my guiltiest pleasures is reviewing celebrity engagements and of course, weddings. Who doesn’t want to be a part of that? I definitely do.

But since I’m just a stay at home mom who doesn’t know anyone famous, I can just lurk and admire from afar and hope these celebrities make it for the long run. Maybe one day I can get an invite to a fabulous celebrity wedding. But for now, I'll just browse the internet for all of the engagement and wedding fun. All of these couples are seriously adorable and I just can’t wait to see them tie the knot.

They fell for each other over the summer of last year and now they're ready to tie the knot. Pratt shared the exciting news on his Instagram page back in January. Pratt captioned their engagement post with these sweet words, "Sweet Katherine, so happy you said yes! I’m thrilled to be marrying you. Proud to live boldly in faith with you. Here we go!"

The Law and Order star is engaged to Jonathan Colby, a retired judge. He popped the question in January. Elisabeth is very excited to be engaged to the love of her life. Here's what she had to say about her engagement: "This photo was taken after Jonathan proposed and as you can see I bawled like a baby with such joy to have found my one true love who I will share my life with forever. I said YES!"

Former NFL quarterback, Tim Tebow, says he's known since he met his fiance that he wanted to spend the rest of his life with her. Tebow slipped a 7.25-carat ring on her finger and said: "This ring is internally flawless, just like you." Swoon!

Benoist revealed the super exciting news over on her Instagram page. “yes yes yes it will always be yes," she captioned the photo. The Supergirl costars met when Wood joined the cast of the CW series, where he plays her on-screen love interest.

Katie Couric's daughter is engaged. The excited mother of the bride-to-be shared the happy news to fans on her Instagram page with a photo of her daughter and fiance. The sweetest part, he proposed to her with the same engagement ring Couric's late husband, Jay Monahan, gave to her.

Gayle King's daughter, who is also Oprah's god-daughter, is engaged. the morning show host shared a picture with her daughter and future son-in-law.

A rep for the Oscar winner confirmed to PEOPLE, that Lawrence and Maroney are now engaged.

The adorable pair got engaged on Valentine's Day surrounded by red balloons. They each shared this photo while Katy captioned it with "Full Bloom," a take on her husband-to-be's last name.

When it comes to engagements, celebrities go all out.

I'm enjoying all of these sweet photos but also, let me see those rings.

The Sister Wives star popped the question to girlfriend of two years, Audrey Kriss, during the Women's March in Washington, D.C. on January 16th. Brown got down on one knee in the middle of the crowd where an excited Kriss shouted, "I do, I do!"

The Three Billboards Outside Ebbing, Missouri actress is engaged to marry MMA fighter Altamimi. She shared the news on her Instagram page.

MTV's The Challenge star popped the question to his longtime girlfriend and she said yes. Boise and Missie shared the news on their social media pages. This is such a cute, and picturesque proposal spot!

JJ Lane, Bachelorette alum who competed for the final rose in season 11, proposed to his girlfriend, Kayla, in Hawaii. Hughes will also be a stepmom to Lane’s 6-year-old daughter Gemma, who he shares with his ex-wife.

The 5 Seconds of Summer lead guitarist and girlfriend were celebrating their three year anniversary at Ungasan Clifftop Resort in Bali when Clifford proposed marriage.

Real Housewives of New Jersey star, Danielle Staub was just divorced one week ago and has already said yes to new beau, Olivier Maier. The couple got engaged while on a tropical getaway to the Cheval Blanc Maison in St. Barth. I'm sure this will be an epic storyline during the Housewives next season.

The Orville costars announced their engagement on January 17th.  So exciting!

“A couple of weeks ago, I said “YES" about a million times to the man of my wildest and most beautiful dreams," the Pitch Perfect star wrote in her Instagram caption. She announced the engagement on social media with a very sweet black and white photo with her new husband-to-be.

The Happy Death Day 2U star was feeling the love on Valentine’s Day when she announced the exciting news that she was engaged. “Cat’s out of the bag! Happy Valentine’s Day to my brilliant, amazing, wonderful, how-did-I-get-so-lucky FIANCÉ and of course, most importantly, to Otis the pup," Rothe captioned a series of photos of herself with fiancé Eric Flem while showing off her gorgeous engagement ring.

The Hamilton actor revealed that he is engaged to his costar Jasmine on Instagram on January 4th. The photo shows off her engagement ring in front of the Eiffel Tower.

Phillipa seems to have confirmed that she is now engaged to Jude after four years of dating by wearing a gorgeous diamond ring at the end of February.

Duchess Meghan's half-brother shared the happy news on January 8th that he and girlfriend of two years will be getting married sometime in March. The couple plans to invite Prince Harry and Duchess Meghan to their wedding.

2019 is not only the year of adorable celebrity engagements, but there are also epic celebrity weddings coming up and we can't wait to see them walking down the aisle.

I am on major wedding watch for these next celebrity lovebirds' big day.

People's Sexiest Man Alive popped the question to his love, Sabrina Dhowre, back in 2018. I think the wedding bells are going to ring for this sexy pair very soon.

The Game of Thrones star has been engaged to the Jonas Brother for almost a year and we can't wait to finally see them tie the knot. Anyone else wondering which of her Game of Thrones cast members are going to attend the wedding?

Are the wedding bells finally ringing for this adorable celebrity couple? The two got engaged in July 2018 so I'm going to guess they are going to have a fabulous 2019 summer wedding.

Lea got engaged to her longtime boyfriend in May 2018. Look at her engagement ring! I too would have said yes.

The Queer Eye star proposed to his boyfriend in May of last year and I'm betting this is going to be a fabulous summer wedding.

Chance the Rapper and Kirsten Corley

The rapper proposed to his longtime girlfriend during a family barbecue. I think the food was extra yummy after that.

All of this engagement and wedding talk is making me want to get engaged and married all over again.

And if anyone knows any of these celebrities and need a plus 1 for the wedding, I'm your girl.