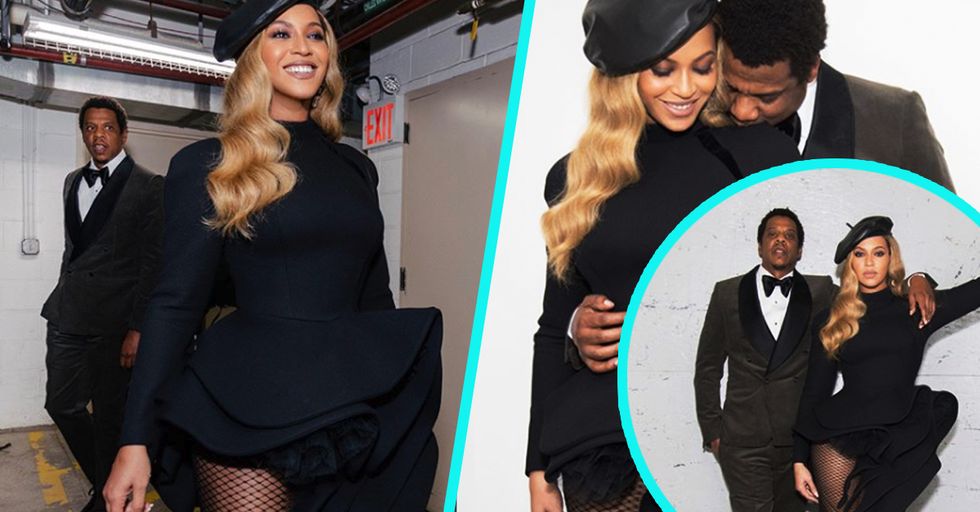 All the Looks From Beyoncé's Most Glamorous Grammys Weekend Ever

The Grammys 2018 was a glamorous affair.

There were all the looks. Or shall I say – lewks. Starting off the night was rapper Cardi B, AKA Belcalis Almanzar, who appeared like a swan princess in her frilly white Ashi Studio dress, which she paired with Christian Louboutin heels and her half a million dollar engagement ring.

Singer, actress, and pop icon Lady Gaga was also having a moment in a sheer black ensemble, which she paired with a luxurious black skirt and towering black boots.

Oh, and there were the braids. Did I mention the braids? Gaga came to stun with corseted braids that were the talk of the night.

Another look that had people talking was Joy Villa, the singer who famously wore a MAGA dress on the 2017 red carpet, catapulting her digital EP "I Make the Static," to No. 1. This year, Villa wore a graphic pro-life statement complete with a fetus in a rainbow womb.
The ladies weren't the only ones making statements on the red carpet, however. Rapper Rick Ross came to stun with a luxurious fur-lined coat and bejeweled shoes. He was serving it for dayssss...

There was one artist, however, that not only stunned on the Grammy red carpet, but in fact, the entire Grammys weekend. If you guessed living legend, Beyoncé, you would be correct. For Grammys, Beyoncé came to slay, and she took absolutely no prisoners.
It all started at the Roc Nation pre-Grammys brunch, which was held at the One World Trade Center in New York City on Saturday. The mother of the Beehive rocked a thigh high slit that was, well, thigh high.
From there, it was over to Clive Davis' Pre-Grammy Gala, where husband Jay Z was honored with the Grammy "Salute to Industry Icons" award.
The pair appeared, dress to stun, with Beyoncé in Azzi and Osta couture, and Jay Z in – well, okay, I honestly have no idea what Jay Z wore, and I don't care either. Do you?
In any event, the combined star power was so explosive, it caused one woman to gape in awe, leading to the meme of the moment.

It wasn't the only meme served up this weekend, however. The very next evening, Queen Bey and Jay took their little princess Blue Ivy to the Grammys. They had such an amazing time, she had to shush them. That became a moment too.
Bey and Jay were so glamorous, so fabulous, so goddamned scintillating, that I would argue they won the entire Grammys weekend, and, indeed, the entire beginning of the year.

What do you think of the Carter Family's Grammy weekend?