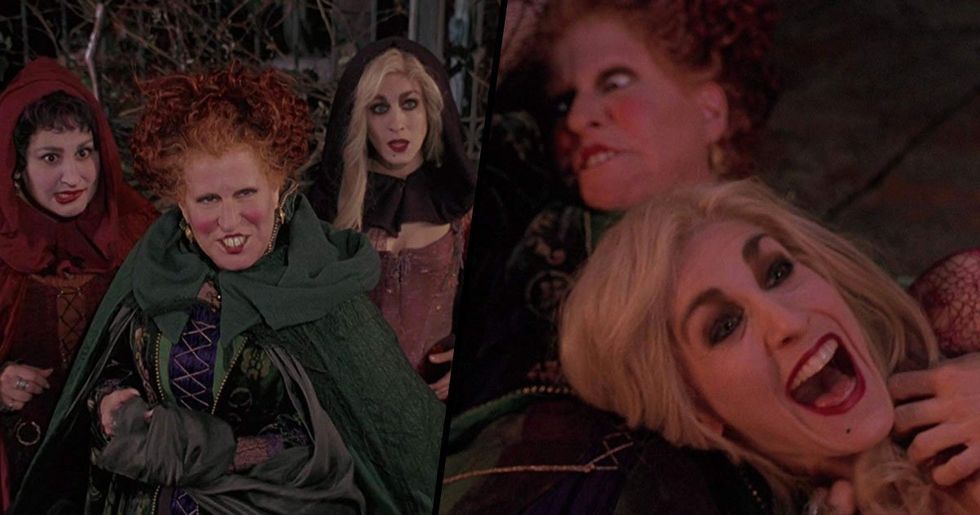 All the Original Witches Are Returning for 'Hocus Pocus 2'

Even though Halloween is now over, it seems as if we're all still in the spooky spirit. I don't know about you, but I for one, think Halloween should occur more often. Candy, black lipstick and the occasional meme costume brought to life? What more could you possibly want?

And the treats continue as the cast of witches in the Halloween classic, Hocus Pocus announced that they will all be back to film Hocus Pocus 2 if it should happen. This news has had the whole of the internet in meltdown mode.

Keep reading for all the details on this exciting news!

The original witches from the cult classic film Hocus Pocus are set to return to the big screen when Disney decides that the sequel is in dire need of being filmed.

For those of you who have never watched the film, let me sum it up for you.

Lucky for you, there are no spoilers here! It came out in 1993 and basically plays on a historic storyline about a group of witches that had been executed but have returned to take revenge.

We see a young boy (Thackery Binx) discover that his sister is missing, so in order to go and rescue her, he visits the house of witches.

He's caught by the witches and turned into an immortal cat. Don't worry, it gets better than this...

They also get caught too!

But don't worry, this is meant to be a children's film, so you don't actually see the execution. However, before they were killed, the 3 decide to cast a spell that guarantees them life again but on one condition...

Three hundred years later, on Halloween, they were back.

The new boy in town (Max), decided he would light the "forbidden" candle and suddenly, the trio have been released. Great going, Max!

And now the sisters are free to run havoc around the place.

This film received mixed reviews at the time but has definitely grown on audiences.

And now everyone can't help but watch it over and over. A fun, little film for all the family.

And things have just got better with the new announcement.

Sarah Jessica Parker who starred as the witch, Sarah Sanderson, recently commented saying that she, along with the other two witches Bette Midler and Kathy Najimy have agreed to get back together for a sequel.

Parker shared a snapshot from the film on her Instagram.

And obviously it didn't take long for fans to start commenting asking if there was a chance of a second film with the three in it.

Parker replied back to one fan...

That's right, we might be having a Hocus Pocus part 2!

Another fan commented asking for, "round 2," to which the actress replied, "Sure! X."

I don't think my heart will be able to take any more teasers!

It is reported that Disney is bringing it back for a second installment, though whether this will be a straight-up sequel or some form of re-boot has not been confirmed. If the original director Kenny Ortega has anything to say about it, the film might be coming earlier than expected! In the meantime, if you don't want the Halloween spirit to die just yet, have a look at these amazing celebrity costumes...