All-You-Can-Eat Buffet Horror Stories That Will Make You Laugh, Cry, and Want to Throw up a Little | 22 Words 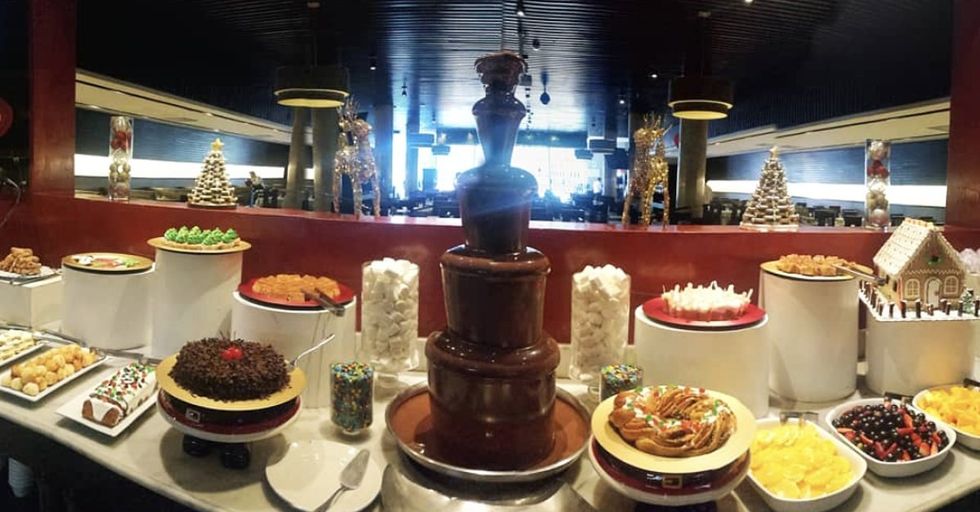 All-You-Can-Eat Buffet Horror Stories That Will Make You Laugh, Cry, and Want to Throw up a Little

Join us for a journey into the realms of the buffet, guided by our favorite friends on the internet, the denizens of Reddit. All it took was one simple question: "what are your all-you-can-eat buffet horror stories?" and Reddit went wild.

We've got the stories you'd expect (yes, there is a lot of vomit), but Reddit also stepped up with stories of heroism, stories of bold (and bad) choices, and stories that show sometimes a true hero is a person who eats 20 slices of pizza and still does what needs to be done. Let's see what's on this buffet line of horror stories, shall we?

We've all had...interesting experiences at buffets.

They're not the most sanitary places in the world.

But we're about to dive into some experiences from Reddit that push the boundaries.

Buckle in. These buffets are about to get weird.

It probably won't surprise you to learn that many of these stories involve puke.

But they just take puke to the next level. Like puking all over the table so the guy who's been tolerating you all day can't eat his dang crab legs.

As we explore these tales of woe here's one rule that you should always follow.

If you cannot identify the meat, do not eat.

Of course some of the most horrifying stories are also the simplest.

Just take a minute to consider vomit in soup.

You wouldn't be able to tell the vomit was in there.

On the other hand, sometimes the story is just how obvious the puke is.

Sometimes the vomit is obvious because of other things.

But enough about the puke itself.

Sometimes the story is what's going on around the puke. Like when someone throws up, then comes right back for round two.

But if you want a truly epic vomit story this one takes the cake.

True heroes are willing to throw up, then immediately continue fighting fires.

Of course the mouth isn't the only body part that can experience pain after a buffet visit.

Some stories focused on...other ways of losing your lunch (or not).

Warning: don't read this if you have an easily upset stomach.

Once again, we learn the importance of knowing what you put in your mouth.

Because "mystery octopus thing" is a recipe for pain.

In fact, not knowing what you're eating is often a horrible decision.

Although sometimes it has funnier consequences than others.

Protip: always know what wasabi looks like before putting mystery foods into your mouth.

You will regret eating straight wasabi.

Or just pay attention to what goes with what.

Nutella and Vegemite are NOT the same.

On the other hand, sometimes not knowing what you're eating can be downright dangerous.

Honestly this story is just sad.

Maybe you'll have a helpful neighbor who spots what you don't.

Like this absolutely wild story from an ICU nurse.

But you can learn a lot at a buffet.

Of course sometimes it's what you DO know that's dangerous.

Like when you know there are cockroaches in the food. NO NO NO.

It could also be who you meet.

Who would have expected a trip to the buffet to be so exciting?

You also probably don't want to know about all the things that have touched the serving utensils at a buffet.

Here's a hint: some of them are other people's mouths.

I may never return to a buffet again.

If that's not enough for you sometimes it's not even the customers who are laughing hygiene in the face.

Sometimes it's the people working there.

Sometimes the stories are straight up hilarious. What an ingenious kid.

But truly, people are wildly bold when it comes to buffets.

Yes, a man burned his hands just to get some crab legs faster.

Or there's this lady who has some serious BDE.

Can you imagine just taking food off of someone else's plate? Me neither.

Or Grandma who isn't afraid to give her granddaughter horrifically unhealthy eating habits.

This is not how you raise a child.

But after all of that, let's end with something happy.

The opposite of a horror story: unexpectedly having a full bowl of bacon bits to chow on for a full cruise. Truly heaven.

The fact that any of us still willingly eats at a buffet. Gross.