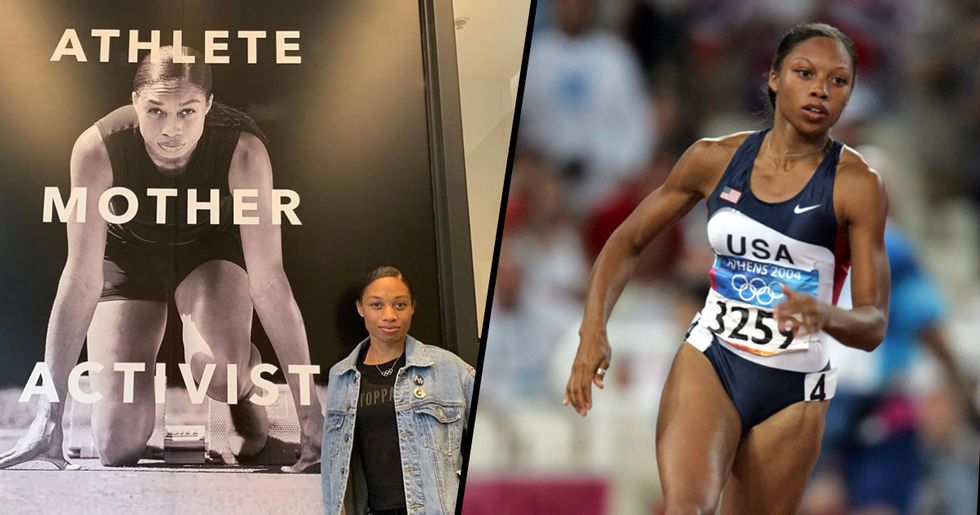 Allyson Felix has no limits.

This week, the U.S track runner was in Qatar, breaking records that no one imagined she would. Felix was partaking in the IAAF World Championships, running the second leg of the first-ever mixed-gender 4x400 meter relay. Not only was this a monumental moment in sporting history, to have a gender-inclusive race, but it was also the moment that Felix beat Usain Bolt's record.

Not to mention doing so after grueling labor that ended in C-section just ten months before.

Felix truly is an inspiration.

Continue scrolling to read all about how this sensational athlete, activist, and mother achieved such a feat...

"This one is for all my baby mamas."

Following her win, Allyson put up an Instagram post paying tribute to all the baby mamas, stating that this win was for them.

Allyson has been very open about the complications she endured following the pregnancy and subsequent labor. Felix ended up giving birth to her baby girl at thirty-two weeks after medical complications. The child was born through an emergency C-section and was put into a neonatal intensive support unit.

Fortunately, mom and baby pulled through.

Meet baby Camryn - or Cammy to her friends. Isn't she just the cutest?

Family is incredibly important to Allyson Felix. Having her baby girl come and watch her races gives her a real motivation buzz. Posting just before the championships, Felix wrote: "I've had to fight a lot this year- for my health, for my daughter, for women & mothers, for what I deserve and for my fitness. I’m really proud to be at my 9th world championships and this one is extra special because my baby girl is in the stadium to watch it all."

So what has Felix been fighting?

Besides fighting for the improvement in her family's health, Felix has faced more battles of late. Since becoming a mother, Allyson has become aware of some things she just can't stand for. Let's start by talking about the maternal mortality crisis.

During her own pregnancy, Felix went to her doctor after experiencing swelling in her feet. After an examination, it was discovered that it was a case of severe preeclampsia. They had to operate and deliver the child immediately. After the horrendous two day ordeal, Felix discovered that, even in 2019, women were facing serious danger through childbirth. And, significantly, most of those women were women of color. Felix spoke up about the crisis as one of six witnesses to speak before the House Ways and Means Committee. In her speech, Felix said: "There were others like me, just like me. Black like me, healthy like me, doing their best — just like me. They faced death like me, too."

Over 50,000 women in America will face a life-threatening condition during childbirth or pregnancy.

This number is increasing and the fact that African American women are three times more likely to be affected was not a statistic Felix was aware of. Speaking to the committee she said: "I was not aware that I was more at risk. I think that says a lot. It’s not really talked about … but it is a real issue. I think had I been more aware, maybe I would’ve had better questions to ask. Maybe when I first saw my swollen feet, I would’ve rushed in."

Felix initially put the doctors on hold to do a photoshoot for ESPN.

Not realizing that she was actually facing a life-threatening condition, the athlete put her work commitments before her health. When she first told her doctor over the phone about her swollen feet, they told her to come in right away. Felix told them that she needed to do this ESPN photoshoot first, but the doctor insisted that she ought not to wait. Now realizing the dangers, Felix wants to make more women aware of the complications and has since become an advocate for pre-natal health.

Felix has also been fighting for pregnant athletes' rights in sponsorship deals.

Pre-pregnancy, Felix had no idea that big sponsors like Nike had a clause in their contracts that penalized pregnant athletes. In May this year, Felix discovered that Nike wanted to pay her 70% less after becoming a mother. Felix wasn't standing for it and wrote an op-ed for The New York Times exposing the mistreatment.

"I wanted to set a new standard. If I, one of Nike's most widely marketed athletes, couldn't secure these protections, who could?"

In the piece, she spoke about how she "asked Nike to contractually guarantee that I wouldn't be punished if I didn't perform at my best in the months surrounding childbirth" - as she understood that this pay cut was under the illusion that her performance as an athlete would be affected by her pregnancy. Nike declined her proposal and Felix dropped the contract, deciding to join Athleta, a womenswear company instead.

Nike decided to change its mind.

Posting an email sent to her from Nike Marketing exec, John Slusher in which the company agreed to provide maternal protection to athletes, Felix celebrated the fact that she had been able to incite change. She wrote: "Our voices have power." What an inspiration!

With her young family behind her...

Felix wanted to prove that she could reach great heights as an athlete post-pregnancy. The IAAF World Championships in Doha, Qatar, would be the ultimate test.

Prior to the IAAF World Championships, Felix competed in several races. In July, she competed in her first race post-pregnancy, coming in sixth place at the 400-meter run at the USA Track and Field Outdoor Championships in Iowa. Perhaps a shaky start, but not a defeat that would become the norm. By September, Felix was back on course. Competing in the 150-meter run at the Great North City Games in Stockton, she took first place.

Allyson has now been running track for twenty years.

And as she made clear from her performance in Qatar, this is one athlete that shows no signs of slowing down.

She's a six-time Olympic gold medalist, three-time silver medalist, and, until yesterday, she shared the record of having held the world title eleven times at the World Championships in Qatar with none other than Usain Bolt.

After Team USA won gold with a world-record time for the mixed-gender relay, Felix became the recipient of twelve gold medals, a record never held by anybody before... not even Mr. Bolt.

What was that you thought about mothers, Nike?

It makes Felix's success all the sweeter knowing that her latest win proves just how absurd the notion of penalizing athletes who get pregnant was. The fact that Allyson Felix's latest victory was also a mixed gendered race slams any illusions that female athletes haven't got what it takes. Heck, Felix can run circles around anyone, ten months after giving birth.

It's been a long road to the top.

Allyson has been competing in the Olympic Games since she was eighteen years old. Little did young Felix know then how far she would come.

"Thank you for standing for something so much bigger than medals."

Allyson's brother has been behind her every step of the way. In a heartfelt Instagram post her brother, Wes, celebrated her latest victory. He thanked her for being such an inspiration and standing up for something so much bigger than medals, ending the post with: "Your brother is so proud of you." Someone grab me a tissue!

Allyson's husband, Kenneth, has also been there from the beginning.

The high school sweethearts have been through so much over the past few years, but knowing that they have each other's never-ending support made all the difference. In a sweet Insta post made by Allyson which shows the progression of their relationship she writes: "It's always been you." Someone get me a box of tissues! But, no, seriously, it's women like Allyson Felix that make me proud to be an American. It's women like Allyson that make me proud to be a woman. If you want to read more about inspirational female athletes, continue scrolling to see Serena Williams' unretouched photoshoot from her feature with Harpers Bazaar. She looks absolutely stunning.