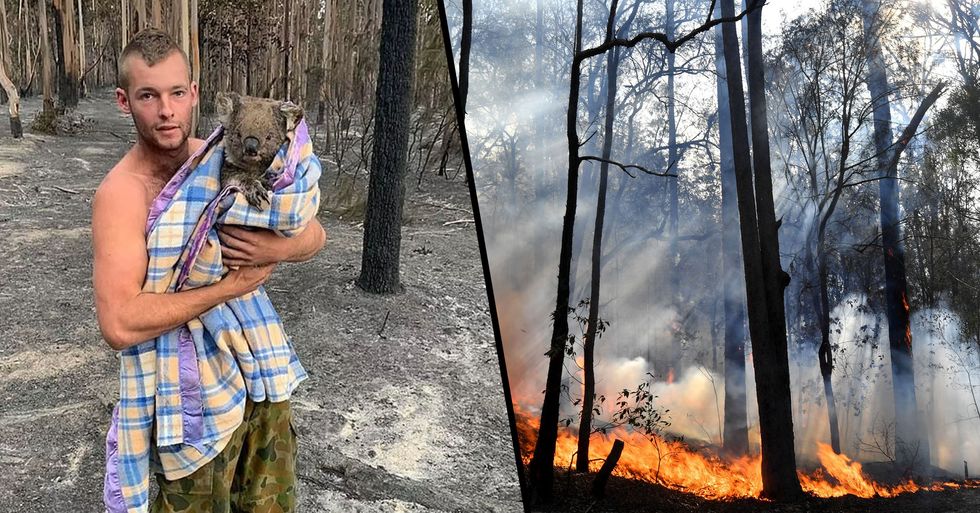 This week some heartbreaking statistics have surfaced, and it's truly gut-wrenching.

Keep scrolling to read the story of a hero who saved 9 koalas from a savage blaze.

There have been fires reported in every state, but New South Wales is truly taking a beating by bush fires and is undoubtedly the hardest hit. According to CNN, so far, in New South Wales alone, more than 1,300 houses have been destroyed.

24 people have been confirmed to have died in the fires since they started...

And of course, we all remember Lewis, the koala who was heroically rescued by a woman using the clothes off her back. Read more about his story and his tragic fate at the end.

Another dedicated citizen is Patrick, who has become an unlikely hero after rescuing koalas from Australian bushfires.

The young hunter, Patrick Boyle, took a brave - if entirely reckless - decision to rescue the marsupials in need, entering the dangerous area of Victoria and risking his own safety in order to carry out the heroic act.

The mission began when his friend found a koala cowering under the pump of a water treatment plant, spurring the twenty-two-year-old into action. Boyle said it didn't take him long to find the first koala in need, but he kept on discovering more and more as he went, which led to him saving 8 or 9 of them.

However, he also found a lot of animals that didn't make it.

He told Stuff.co.nz: "I've found eight or nine so far that have been rescued. I found over ten that were dead and about another five that are alive and healthy for the time being." The koalas that he saved, he took to the Mallacoota Wildlife Shelter, which is actually just someone's house where they are being looked after.

"Farmers, hunters and workers are the ones out there actually taking action right now."

It's because of his hunting hobby that he has become an unlikely hero in his native land. He continued: "I'm a hunter - I'm one of the last people that others would expect to be helping these animals."

And his heroic act carries a message for others...

A baby koala with bandaged feet... another of the precious patients at the Port Macquarie Koala Hospital, rescued… https://t.co/3RBr8SBDg8
— Lizzie Pearl (@Lizzie Pearl)1574206495.0

Patrick wants anyone who is moved by the plight of the creatures, and his efforts to save them, to donate what they can to the Mallacoota Wildlife Shelter. This shelter helps all the wildlife that are affected by the fires recover. Thank you for all your efforts, Patrick!