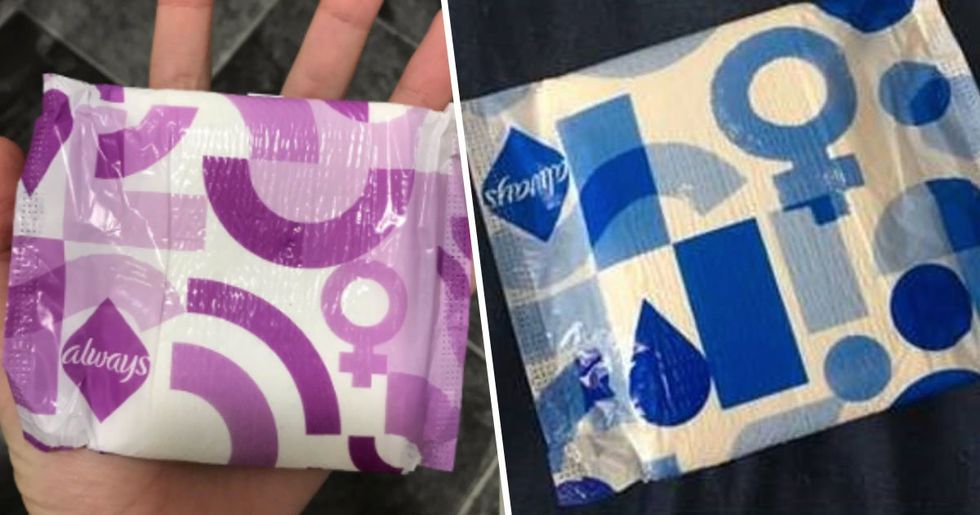 Always is a company that provides the world with sanitary products but recently they have found themselves in hot water for more than one reason.

The first story involves countries that have chosen to boycott the brand due to their irrational use of scents and chemicals in their products. And the second scandal comes after a controversial decision was made to remove the Venus female symbol from its packaging to be more "inclusive."

Keep scrolling to find out the details as to why they have chosen to go ahead with these decisions.

This may repulse some people who can't handle reading anything about the inner workings of a female, but do me a favor and grow up.

Some people seem to think that the menstrual cycle is some sort of taboo subject that needs to be avoided at all costs, but I'm here to remind you that it's not. It's a natural part of the female routine.

In a simple explanation, the cycle involves the removal of an unfertilized egg with the lining of the womb. That's literally it. There's nothing repulsive about it.

So why is it considered such a taboo subject?

We find it hard to talk about it openly because society has always stigmatized it. Even to this day, my mom will whisper the word "period" around my brothers like it's some secret that they have no idea about. Clearly, she's never sat through an awkward science lesson in middle school. Yikes.

Even though times are changing, some cultures aren't...

In India and other parts of Asia, the idea that a woman can be on her period seems to be too hard to accept. Girls as young as eleven have been shunned while on their period in a "cleansing custom."

What is the "cleansing custom"?

This is when a woman is typically removed from her household and placed into a hut, or a shack, where she will reside while she is menstruating. That's right. She is physically removed from society and put into isolation because she is deemed "dirty" if her body is in the natural process of removing an unfertilized egg.

So, this is why we need to be more open about the topic.

However, rather than talking about how to help normalize the process in other countries and help women receive readily available sanitary products, which they're still not getting, we've all been distracted by something else.

The company has found themselves in an uncomfortable spotlight after they announced that they would be removing the Venus female symbol from all their packaging.

The controversial decision came as a response to requests from nonbinary and transgender customers.

In July, trans activists named Ben Saunders and Melly Bloom tweeted Always, questioning why the female symbol had to be part of their packaging.

Is it really necessary?

This is what Bloom wrote: "Could someone from Always tell me why it is imperative to have the female symbol on their sanitary products? There are non-binary and trans folks who still need to use your products too you know!"

Lots of trans men have spoken out about the issue.

They have spoken of the dysphoria they feel when purchasing products with female symbols plastered on them.

When things are stereotypically female, it can trigger some customers.

Jamie Raines, a trans man, told Pink News this: "It can be quite hard to navigate having periods as a guy when everything to do with periods is aimed very much towards women and is very female-oriented."

"The first time [having a period as a man], I was brought back to that very dysphoric feeling that I had years ago, and I just remember again being stuck on the toilet, crying, not knowing what to do. It shook me."

In response to these concerns, Always made the decision final.

From December 2019, the company will start issuing its new packaging and by February 2020, it hopes that the process will be complete.

The customer care team addressed the issue on Twitter saying this...

"We are absolutely grateful for having people like you voicing their opinions. Thank you for contacting us, your comments help us improve every day!"

However, this decision has been met with its fair share of backlash.

Of course, many people aren't happy with what the company has chosen to do, and aren't afraid to voice it either.

Some people were extremely angry with the decision.

If you were born a women but are now trans (and or non-binary) you can’t simply ignore the fact that you have a fuc… https://t.co/FSeHbWWivS
— Tania F Gonzalez (@Tania F Gonzalez)1571799590.0

This user expressed how people who identify as trans and non-binary can't just "ignore" their female genitals.

And this user doesn't seem to understand the message Always were trying to promote.

So transgender women made always change their “women” symbol? Lmaoo chill yo. What do pads n periods have to do with trans?
— Scrilla TMU (@Scrilla TMU)1571789747.0

She claims that everyone needs to "chill."

Others have gone as far as to claim that that only women get periods.

@phiddies @Always Only WOMEN get periods. Whether you are transgender or not it is still your FEMALE part that is h… https://t.co/jnNVVaA4Dp
— Tammy Ferguson (@Tammy Ferguson)1571794211.0

However, some people are calling those who oppose the idea "transphobes".

Is it being more "inclusive" or are we doing something else completely?

This sums it up for me.

With this move, are we simply wiping out female biology?

To me, it seems as if we're just unintentionally wiping out what makes females, females. I'm all for being inclusive, but if you're just trying to ignore the fact that only women get periods, then think about this: Trans men in general try and look stereotypically like men, right? And if looking like a man makes one feel and identify as a man, then the whole period thing belongs to women, if we're following that logic, right?

This isn't the first time that Always has hit the headlines.

Recently, the company has been under fire for the harmful chemicals and scents in their sanitary products.

Women all around the world are experiencing discomfort...

Due to whatever is in the products, women have found themselves with burns and rashes down below, in their most sensitive area and are calling for a boycott on Always feminine products.

Is woke culture taking things too far, or are we on the right path to equality?