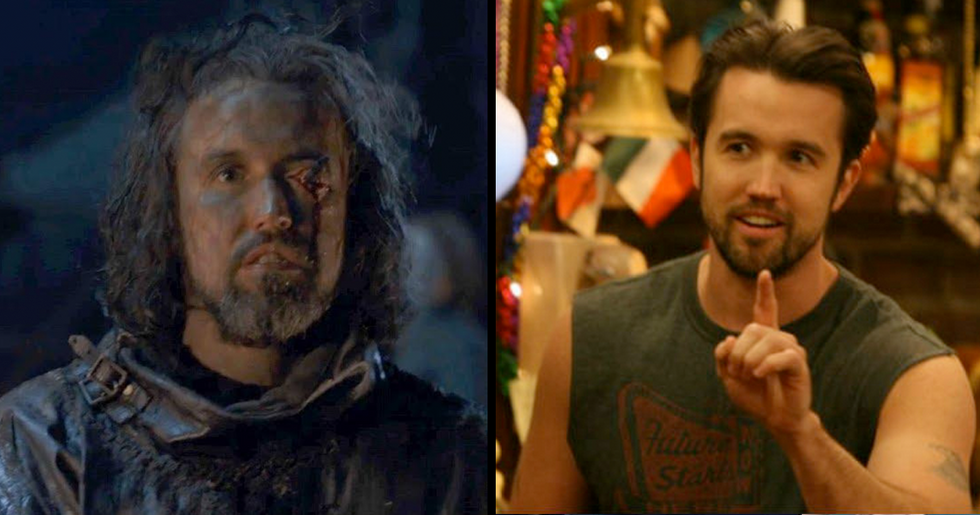 We've seen a lot of famous faces cropping up in Game of Thrones over the years.

This hugely successful show has gone from strength to strength, and millions of fans have been eager to see what will happen in the final season.

But it wasn't just the show's much-loved original characters that fans were talking about after watching Sunday night's episode.

It was also a particular celebrity cameo that caught their eyes. And what happened to one of his during the episode!

Warning: The scene in question is not for the faint-hearted.

We even spotted another celebrity cameo appearance! Keep on reading to find out who it was.

Plus our ingenious prediction for the next celebrity to star in the show!

Just wait till you see who we think will be next.

Nobody could have predicted just how popular Game Of Thrones would turn out to be.

The season 8, episode 1 premiere was watched by 17.4 million people on Sunday night, smashing the record 16.5 million that tuned in to watch the finale of season 7.

So, it comes as no surprise that celebrities are queuing up to star in this hit show.

Many of the cameos are so brief, you could blink and you miss them. And we literally have on more than one occasion. So we'll help you out and share the best ones with you.

For some reason, musicians seem to feature highly.

Cast your mind back to Season Three when the Red Wedding took place, maybe you'll remember the drummer in the wedding band. Yep, that was Chris Martin's bandmate, Will Champion, doing what he does best.

Here are some more musicians at another wedding.

Sigur Ros starred in Season Four at Joffrey's wedding but unfortunately, they were not to his taste and he soon grew bored and started throwing coins at them. Bit harsh. He wouldn't do that to Ed Sheeran who features further down the page in his unforgettable cameo role.

And for fans of pub rock.

Wilko Johnson from the British rock band, Dr. Feelgood, starred as the mute executioner in Season One and Two. Even without saying a word, this dude seriously rocked the role.

Continuing the rock theme, Gary Lightbody from Snow Patrol also managed to show off his singing credentials in Season Four.

This famous musician can be spotted singing "The Bear and the Maiden Fair" whilst leading Roose Bolton's men to Harrenhal.

But if heavy metal is more your scene, then check out Season Five.

Mastodon wrote the 'White Walker' song for Game of Thrones, following this, the GoT producers personally invited the band to appear as wildings in Season Five of the show. They then made another cameo appearance in the finale of Season Seven as wights, marching in the army of the undead.

Fry is the lead singer of band Animal Circus and has also starred in several UK comedies including White Van Man and Plebs.

And YouTube comedian Steve Love also got the much-coveted call from the GoT producers.

If you are familiar with Steve, you will know that he is known for his uncanny impressions of Jon Snow, among other characters, and in fact, producers were so impressed that they offered him a cameo role in Season Six.

The UK's tallest man also appeared on the show.

And just because they can.

Show creator's David Benioff and D. B Weiss made cameo appearances in Season Five in the ultra creepy House of Black's Hall of Faces.

Benioff did not stop at a cameo role for himself.

He also secured one for his good old mom and dad. Clearly being surrounded by all these famous faces has not gone to his head. Benioff's parents can be seen playing a pair of peasants making their way to King's Landing in Season Four. Not the most glamorous of roles, but it's better than nothing.

Marshall is a self-confessed archery enthusiast so picked the perfect scene for himself in Season Four at the Battle of Castle Black.

Talking of faces or heads in this case.

Do you recall seeing George W. Bush in Season One? Well, not actually Bush himself but a severed head that bore a very strong resemblance to the former president. Brilliant!

They've had a few famous animals too.

Including the Bart the Bear II who was so impressive, you may be forgiven for thinking he was a CGI creation. This was not the case, Bart is actually a seasoned actor who has appeared in many box office hits including Into the Wild, Evan Almighty and We Bought a Zoo. Now that's one impressive resume.

And of course, the most famous cameo to date; Ed Sheeran.

Ed appeared many times in Season Seven; firstly singing in the woods with Arya in the opening episode and then he can be seen many times drinking and singing in the background. But will he appear in any more episodes? Keep on reading to find out.

As we start Season Eight, the latest celebrity cameos have been spotted.

Eagle-eyed fans spotted one very famous face in the first episode of Season Eight that aired on Sunday on HBO. Did you?

It was Rob McElhenney.

Star and co-creator of It's Always Sunny in Philadelphia. He has actually known David Benioff and D. B Weiss for years, they even wrote an episode for his show way back in 2013.

McElhenney even invited them to guest star in it.

Which they did in Season 12, starring as a couple of super-annoying waterpark employees. Clearly they now finally decided to return the favor.

McElhenney has also appeared in the hit show Lost.

How did we forget about this? He starred in the third season and then again in Season Six for one solitary episode.

However, fans of Rob may not be happy about what happened to him during his brief appearance in GoT.

During a siege on Euron Greyjoy's ship, McElhenney and many other of the ship's inhabitants were killed by Theon Greyjoy. Warning: It was quick and it was ugly.

He received an arrow through his eye for his betrayal of Balon's trueborn heir and it was not a pretty sight. Well, an arrow fired directly into your eye was never going to be pretty.

He posted a picture of himself with his fatal injury captioned: "Don't blink". To be fair, if we got a cameo on GOT, we wouldn't care whether we lived or died!

And there was another surprise cameo in the same scene. A comedian who previously starred in Knocked Up, can you guess who?

It was Martin Starr. Martin is an American actor and comedian who has starred in Silicon Valley since 2014. As well as Knocked Up, he also appeared in Adventureland and Spider-Man: Homecoming.

It looks like these two comedic actors had a great time being killed together.

Who wouldn't? You could do pretty much anything to us if it meant we could appear on GoT.

Fans also managed to get some closure on a previous celebrity cameo in this premiere episode.

Sadly, it was heavily hinted that Ed Sheeran's character had perished during the Loot Train Attack. Oh no! Poor Ed.

It was Bronn who seemed to confirm his death in a scene with three women.

He said: "that boy Eddie, the ginger, came back with his face burnt right off." Ouch! Not a great way to go.

Which means no more of this.

How could they do this to us? They better have some mighty good celebrity cameos in the pipeline for us to forget about this sacrilege.

Maybe there will be some more in Episode Two?

Let's just watch the trailer again and see if we can spot any celebs lurking in the background.

Joe Jonas is already a super fan and we'd love to see him make an appearance. Even a brief one where he dies an agonizing death.