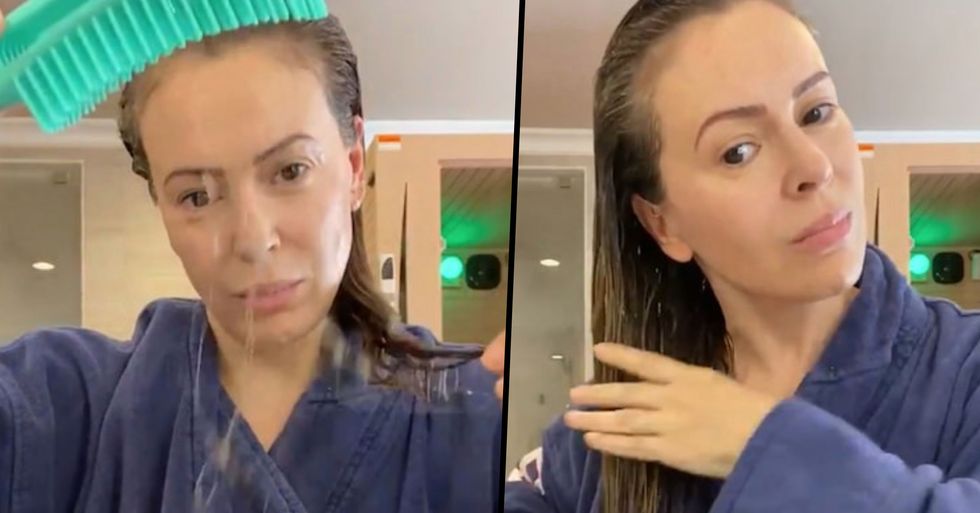 Alyssa Milano has just filmed a video of herself brushing her hair, claiming that coronavirus is causing hair loss.

But, after watching, there have been some very mixed reactions from fans...

Alyssa Milano has once again got candid about her health.

This time, she opened up about what she claims to be a symptom of COVID-19 that doesn't seem to be talked about.

She has been talking openly about the virus for quite a few weeks now.

And has been starting a conversation with fans sharing symptoms and advice.

On Sunday, the star filmed herself brushing her hair...

Highlighting the hair loss she's been suffering from.

After the video emerged online...

Opinions have been pretty divided.

Some even accused her of lying after watching the clip.

The New York native stepped into the spotlight at just 8 years old.

The actress appeared in a national tour of the smash-hit musical Annie, marking the start of her successful acting career.

Her breakthrough into the industry was unexpected.

Why? Because it was her babysitter that took her to an audition for the production, without the knowledge of her parents.

The risk clearly paid off...

And while her parents were wary at first, they gave their permission for her to star in the broadway show - skyrocketing her career in the industry.

Alyssa made the transition onto the small screen soon after.

In 1984 the star bagged a role in the hit sitcom Who's the Boss? as Samantha Micelli, the outspoken daughter of Tony Danza's character.

The show had a successful 8 season stint.

And saw the actress transform into one of the leading teen icons of '80s American pop culture.

During her years on the sitcom, Alyssa also tried her hand at music.

But it didn't result in a big singing career, and the albums were only sold in Japan.

While her years starring in Who's the Boss? made her name widely known...

It also had its downsides, with Alyssa worrying she would be typecasted. So, she spent years trying to break away from her Samantha Micelli character - taking on roles in movies such as Deadly Sins and Poison Ivy II.

With the starring role of Phoebe Halliwell on the smash-hit series Charmed.

The show followed 3 sisters who discover they are modern-day witches.

And it went down a treat with fans before closing its doors in 2006.

After her Charmed success, Alyssa continued to appear on the small screen.

Starring in the likes My Name Is Earl and Romantically Challenged.

Recently, however, Alyssa opened up about her health.

Amid the pandemic, the star revealed she believes she had suffered with COVID-19.

The star says she contracted the virus back in April.

And has been opening up to fans about the physical symptoms she's been experiencing.

Aside from the symptoms we already know the virus causes...

Alyssa revealed an alleged lesser-known one that has been wreaking havoc on her.

The star says she has been experiencing hair loss as a result of the virus.

This week, she uploaded a video showing how much of her hair is falling out, to highlight the symptom to fans.

In the clip, she can be seen brushing her wet hair.

"I just wanted to show you the amount of hair that's coming out of my head as a result of COVID," she says, before showing her brush to the camera. "As you can see, in there, there is no hair in there right now."

She then showed the result of brushing her hair a few times over.

"One brushing, this is my hair loss from COVID-19," she said, showing the clump of hair."Wear a damn mask."

After the video emerged, fans expressed their sympathy for the actress.

"Your beautiful hair, I am so sad watching this."

Some shared their own experiences with COVID and hair loss.

@Alyssa_Milano @CheriJacobus This is exactly what’s happening to me. Think I got Covid in February and getting an a… https://t.co/xupYiknAJz
— Lenore (@Lenore)1597007763.0

Even offering the star some advice on what to do to help reduce the hair fallout.

Not everyone was so kind, however.

Many accused the star of over exaggerating the hair loss.

Some even accused her of lying.

Claiming that it was hair extensions she was pulling out, not her actual hair.

Watch the clip in question below:

What do you think? For more on celebrities and COVID, scroll on to read about to find out which actor contracted it on his birthday...