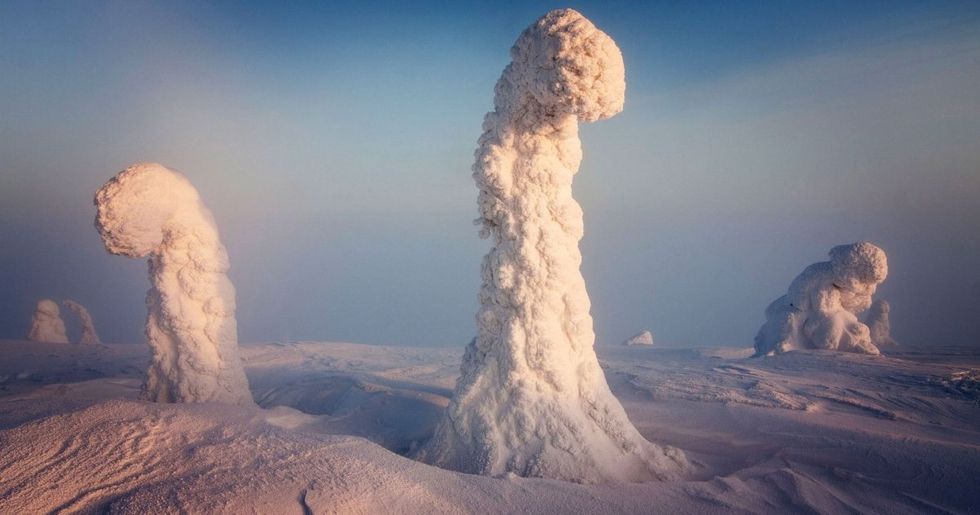 There are so many things in this world that are really super interesting. But they're not the kinds of things that you run across in your day-to-day life.

But, thanks to the Internet, we can see all kinds of fascinating stuff.

Even if we can't see them in person. Here are 19 mind-blowing sights every person would benefit from seeing.

You know the paper that restaurants and stores use? It's called thermal paper, and it reacts to heat. It also reacts to the chemicals in hand sanitizer, as you can see here.

Baby, you're a firework.

This is a cross-section view of what an aerial firework looks like. There's a lot going on in there, huh?

In the right conditions, ice can form on individual blades of grass. Isn't that wild?

This is a colorized photo of what the Statue of Liberty looked like when it was first delivered to the United States. Obviously, none of us were alive to see it back before it turned green with patina. From one torch-bearing lady to another.

Her name is Jennifer Joseph. She's the woman who posed for the Columbia Pictures logo.

Here's what it looks like when a cat's paw touches a plasma ball. You know. Just in case you were wondering.

This is the AuthaGraph.

It's the most accurate world map ever made. It does the best job of showing the relative sizes of the continents and countries, as well as the actual distance between them.

This is a rainbow eucalyptus tree!

The bark peels off to reveal multi-colored layers underneath. Pretty trippy!

Here's a picture of the Stokkur Geyser in Iceland.

Ever since an earthquake in 1789, this geyser has erupted every 4–8 minutes. This picture shows the geyser a split second before erupting. This next image shows another incredible natural phenomenon.

That's because they sort of undulate like waves when they're in the sky. Looks kind of ominous, doesn't it?

See that tiny speck in the center of this image?

That, believe it or not, is a single atom. Pretty incredible.

This is called a split lobster.

This specific coloring only occurs once in every 50 million lobsters. That's one lucky fisherman.

Don't forget to wash your hands when you come in. This is the handprint of an 8-year-old child who has been playing outside. All of the various germs and bacteria grew cultures on this petri dish.

Take a closer look at that statue...

Upon closer inspection, there's actually a mummified monk inside the statue. That's certainly not something you see every day. This next image is kind of terrifying.

This is a tadpole.

Yep. A tadpole. As in those super tiny things that eventually grow into frogs. This one is from an invasive species of bullfrog. It was discovered by the Southwestern Research Station.

Nope! It's actually an aerial view of New Delhi, India.

There's no water to be seen. Looks like it was a fun park once upon a time, though!

This floor is perfectly flat.

The carpet's design just makes it look wobbly. I think I'd have a pretty hard time walking on it!

This is actually a picture of snow-colored trees in Lapland! Share this with someone who will be amazed!