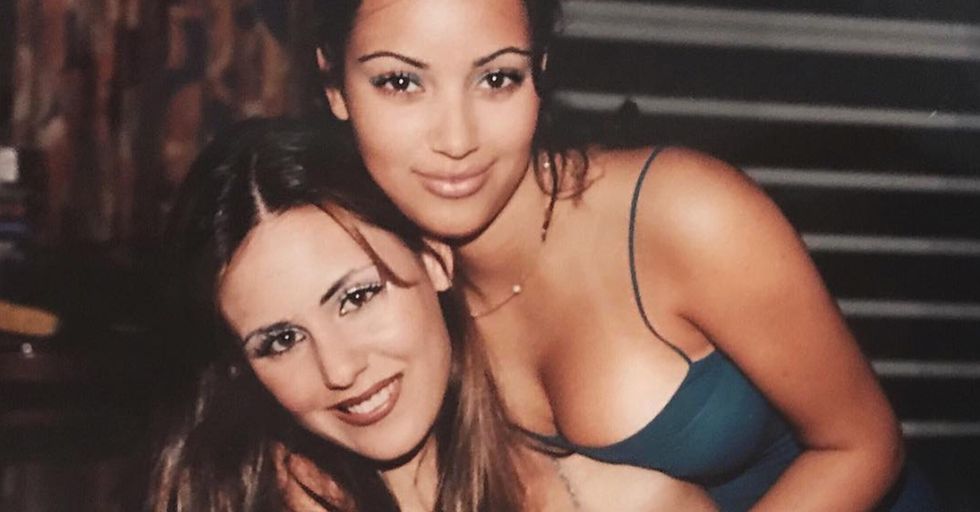 Did you know that celebrities were once kids too? Surprisingly, they don't just pop up in the world famous and ready to take over the public consciousness.

And these photos are, more often than not, glorious.

Here, I've compiled 19 of the best celebrity throwback Thursday, fall back Friday, and other vintage photos of themselves that they've been compelled to share over the years. They will make you giggle, and they will make you realize that celebs really are just like us.

The early 2000s was a rough time for fashion, and that notion is pretty comprehensively clear in this photo of Mandy Moore. That shirt is covered in feathers. Feathers.

Is Adele not the cutest child you have ever seen on planet Earth?! She's beyond adorable. It's actually not fair.

After she broke out in Halloween, Jamie Lee Curtis appeared on Charlie's Angels as a professional golfer who was being stalked. As Curtis wrote in her caption, "I had never played golf before, never actually swung a golf club but I had some good training and Cheryl Ladd had to wrestle alligators when someone sawed through the bridge that we were walking on."

Here's Kim at 17 years old in 1997, green eyeshadow, butterfly clips, and all. Talk about a glow-up, am I right? This next one will actually shock you to your core...

Yes, that's right. This nine-year-old haircut is January Jones, a.k.a. Betty Draper, a.k.a. one of the most gorgeous women in the world. All I can say about this is: It gets better.

OK, vintage Janet Jackson is just as iconic as present-day Janet Jackson. Basically, she's one walking legend and we should all bow down to her.

Cindy Crawford's Instagram is a treasure trove of amazing throwback pictures, and this is just one of them. What a pair.

Miley Cyrus has gone through many phases while growing up in front of the cameras, and honestly, the fact that she is as powerful and awesome and strong as she is is a testament to her. She was one cute kid!

Why does Hilary Duff look older here than she does on Lizzie McGuire? Glamour shots for little children are always so bizarre. See if you can recognize the next one...

Before Chris Pratt was everyone's leading man hero, he was the kid who sat in the back of the bus and made fart noises when anyone sat down.

I challenge you to find a better couple. No wait, that's not fair. It doesn't exist.

Yes, this is an epic photo of Elizabeth Banks when she was 14, but she has an important message to go along with it: "The thing I know now that I didn't back then is that any energy I put into looking cute has to be about me and not about pleasing or attracting anybody else." Hell yeah!

"Typical of me to forget to wear the track team shirt on photo day," Jackman wrote. No one knew then that they were standing next to the one and only Wolverine. The next one is of the "first headshot" variety, and it's amazing...

SMG's bangs in this photo are second to none. Literally the best bangs in the biz. I hope she got a ton of jobs because of those bangs.

This is most definitely the face of a little girl who just found out she would grow up one day to have a catchphrase and that catchphrase would be, "That's hot."

Joey Fatone posted this photo of his legendary boy band and his little baby daughter from back in the day. This is a good one. Share this with someone who loves throwback pics!