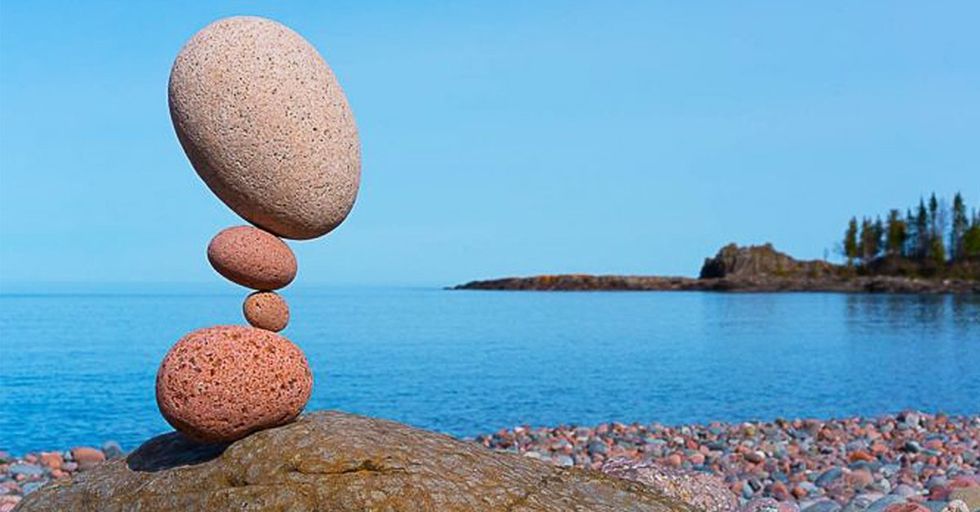 Some things in this life you just have to see to believe. These photos show the most amazing moments and interesting things people have managed to catch on film.

Someone perfectly balanced these stones on the shore of Lake Superior.

How is this possible?! Is there no gravity at Lake Superior?

This shot of a deer and the sun is unbelievable.

This is a once in a lifetime shot! The sun is perfectly centered between his antlers.

This erupting volcano is Hawaii formed a smiley face.

This is a downed power line.

Someone caught this insane lightning strike in New York City on film.

This is real, not the poster for an upcoming disaster movie. The next post is an serious tragedy, keep reading to find out what it is!

A truck carrying chocolate overturned on a highway.

Anyone have a spoon? Five second rule, right?

It's not, really. Someone arranged yellow leaves around the tree base to give it the appearance of glowing light.

This person caught the moment he lost his keys skydiving on camera.

Have you ever seen an albino moose?

Well, now you have! Albinism can happen to most mammals and reptiles, but it's very rare in moose. Keep reading to find out the worse place to lose your glasses!

This rock climber dropped his glasses.

And there they go.

This is an aerial photo of an island, right?

Nope, it's scum on a pond! But it probably fooled you, huh?

This clocktower caught on fire, and someone snapped a photo of it.

This photo is equally terrifying and beautiful.

This person is standing in a crack in the road created by an erupting volcano.

Lava isn't that hot, right? Like a warm bath. This is totally safe.

This is why you should always make sure your toolbox is closed if you are driving on the highway.

The person who took this photo was behind a truck that hadn't done that. This is the result. More unbelievable photos this way! Keep reading!

This carousel caught on fire and it's amazing.

How spooky is this?

This person ordered clothes online and instead received...this.

Yup, that's an entire box full of security tags. And a coupon!

So awkward when you're trying to haunt a house but you freeze.

How does this happen? It's eerie.

"Excuse me, sir do you have a moment to talk about organic birdseed?"

These birds perch outside an office window every day.

This cat crawled into a glass bowl.

The results were better than anyone could have expected. Do you know someone who absolutely needs to see these unbelievable photos (especially the cat, because let's be honest, everyone needs to see this cat). Share this article with them on social media!