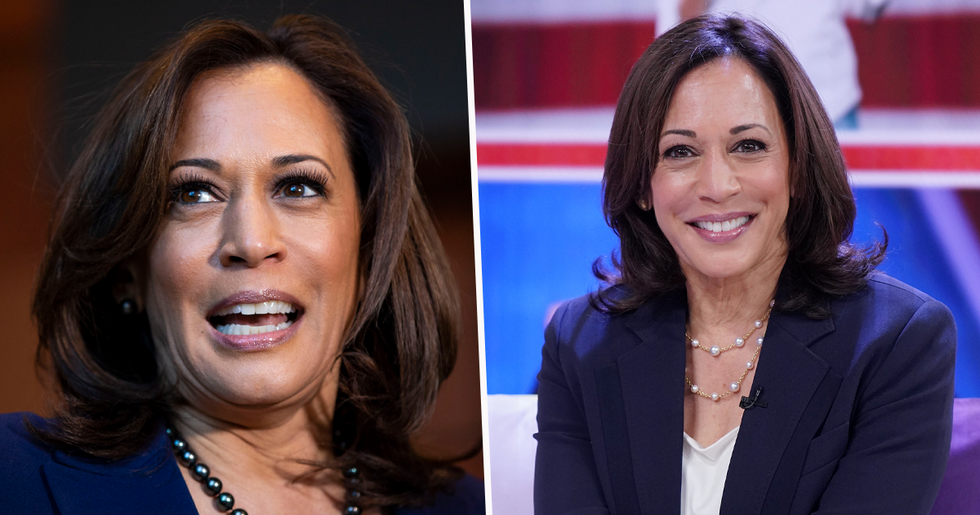 Amazon has been forced to remove a range of "offensive" t-shirts that were personally attacking Kamala Harris, Joe Biden's new presidential running mate...

Joe Biden made a very exciting announcement earlier this month.

He confirmed his running mate for the November presidential election - and people had a lot of thoughts.

Harris is from Oakland, California.

She began her career at the Almeda County District Attorney's Office.

She has served as the Attorney General of California in 2010 and again in 2014.

Although Harris received criticism during her time at this job due to her tough-on-crime policies.

But with her stances on healthcare reform, federal descheduling of cannabis, a path to citizenship for undocumented immigrants, the DREAM Act, a ban on assault weapons, and progressive tax reform...

It's clear Harris is hugely progressive in many other political fields.

It was recently announced that Harris is the official running partner to Joe Biden.

Many were very excited about this news...

Although, in the current political climate, some others had issues with Harris' past work on criminal law.

Is she a good match for Biden?

This is Biden's third attempt at the job, having previously run in both 1988 and in 2008, before becoming vice president to Barack Obama.

Many people seem to think so...

Barack knows the weight and power of the presidency because he’s lived it. The job requires empathy, discipline, an… https://t.co/nKX1Z5EZQQ
— Michelle Obama (@Michelle Obama)1597894696.0

Including the Obamas themselves!

Biden's campaign seems to have a good chance...

And the hopeful future president, alongside Harris, is clearly wanting to make a change to our country.

Help save our great country🇺🇸 from Kamala Harris and Joe Biden. Vote for @realDonaldTrump in person or by absente… https://t.co/7yRHFcCGe8
— Scherie Murray (@Scherie Murray)1597894615.0

There are people out there who aren't loving the Biden and Harris combination.

There have been people out there taking things a step too far.

A range of t-shirts was recently posted on Amazon for sale...

They were listed on Wednesday morning and Twitter users soon started pointing out the vulgar and offensive message they displayed in reference to Biden and Harris.

And people were offended by the sexist and offensive joke that was made directly towards Harris.

Many believe that the vulgar t-shirts have been made out of anger...

@TMZ Trumpanzees know they will lose in November. They have nothing to run on.. So Ofcourse they’re flailing like wild beasts
— Captaincheeks (@Captaincheeks)1597863028.0

And they feel that Trump supporters, deep down, know that they're going to be losing in November.

The t-shirts read the slogan, "Joe and the Hoe"...

Which is coincidental, as the derogatory phrase was recently adopted by the conservative radio host and friend of Donald Trump Rush Limbaugh, who has a history of making abusive comments about the senator.

How could Amazon allow such an offensive and derogatory item to be listed on its website?

People started to demand the offensive t-shirts to be removed from the website...

And it didn't take long for Amazon to take this anger on board.

As of around 12:30 p.m on Wednesday, an Amazon spokesperson said the products had all been removed for violating selling guidelines.

"All sellers must follow our selling guidelines and those who do not will be subject to action including potential removal of their account," the spokesperson said in a statement. "These products have been removed."

Even though we're more than sure that Harris saw the offensive t-shirts...

We're sure that she won't allow it to stop her from giving Biden's presidential campaign the best chance it has at winning in November. Keep on reading to check out Joe Biden's best Twitter burn...