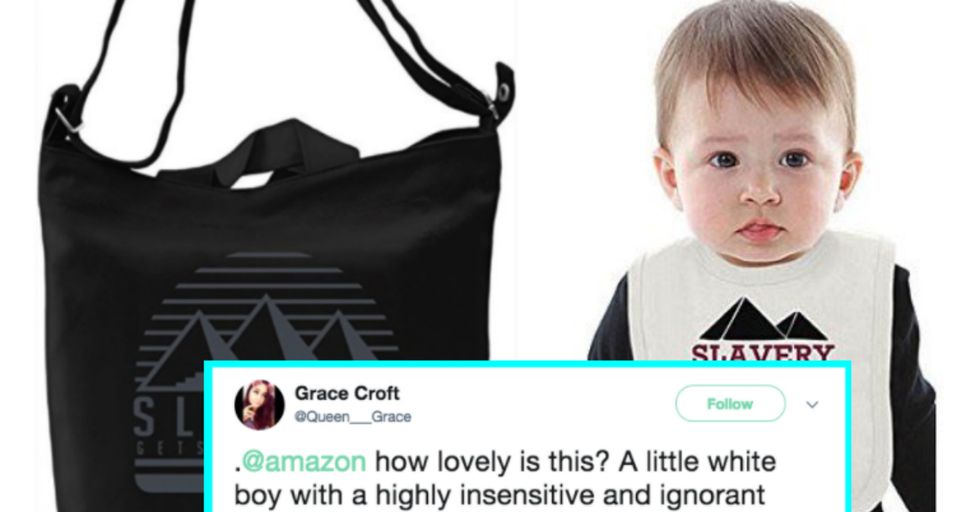 True to its name, Amazon.com is a veritable jungle of products of all kinds. You can buy literally anything on Amazon, as this poor couple discovered. Because of Amazon's unthinkable vastness, sometimes wildly inappropriate items slip through the cracks.

It shouldn't happen. Period. But it does, with some regularity, and when it does, the backlash is always immediate and passionate.

This time, Amazon has come under fire for selling pro-slavery products. Yeah. Not a good look.

This is far from the first time Amazon has been criticized for allowing the sale of insensitive products.

For example, this sweatshirt isn't great. It's the opposite. Although Amazon itself wasn't the vendor of this product, the site does have the power to remove items from the site. And their policy for policing items seems to be "wait until people on Twitter are super outraged." Needless to say, they could be a bit more proactive.

According to this Twitter user, allowing the sale of offensive products is just sort of a habit for the online retailer.

Obviously, this is a problem. And unfortunately, it doesn't seem like Amazon has any real plan in place to combat incidents like this.
Amazon has the power to help the conversation — they could take a stand and stop the spread of messages of hate and messages that stigmatize mental illness. But alas, they are not.

Speaking of messages that infuriate, check out the way this retailer decided to market their plus size leggings:

This obviously caused quite a stir. One reviewer wrote, "I can't believe Amazon would even allow this type of advertising. Terrible. How about you guys get an actual plus-sized model to model plus sized clothing or just show the leggings solo. Offensive!!!" That about sums it up.

Clearly, there's a problem that needs to be addressed here.

But Amazon doesn't seem up to having the conversation, and that's extremely disheartening. Now, they've come under fire yet again for beyond egregious pro-slavery items. Wait until you see these...

Several products — most notably including children's clothes — sporting the slogan "Slavery Gets S**t Done" were for a while there being sold on Amazon.

Yah. Not good. You see the pyramid graphic over the top?
It's hard to believe that there's anyone out there who would think that this is a good idea. But this is the world we're living in in 2018.

Of course, once one person noticed that these were being sold on Amazon, the outrage spread like wildfire.

As it should have. Jakub Sobik of the charity Anti-Slavery International told Reuters, "If it is meant to be funny, it fails miserably."

How awful is it to see this cute little kid wearing this message of hate?!

David Westlake, chief executive of International Justice Mission UK really put this in perspective: "Children the same age as those modeling the T-shirts will be forced to work long hours for no pay in desperate conditions where starvation, beatings and sleep deprivation are common. Rather than trivializing slavery, companies and the global community must recognize the vast injustice of modern slavery and work together to end it for good."

And if any company has the power to be a force for good, it's Amazon.

Jeff Bezos, Amazon's CEO, is the richest man in the world. He could use a fraction of a percent of his $113.5 billion to up his efforts to be vigilant about removing offensive products from his online store. It's a small ask, a tiny change that could have a major impact.