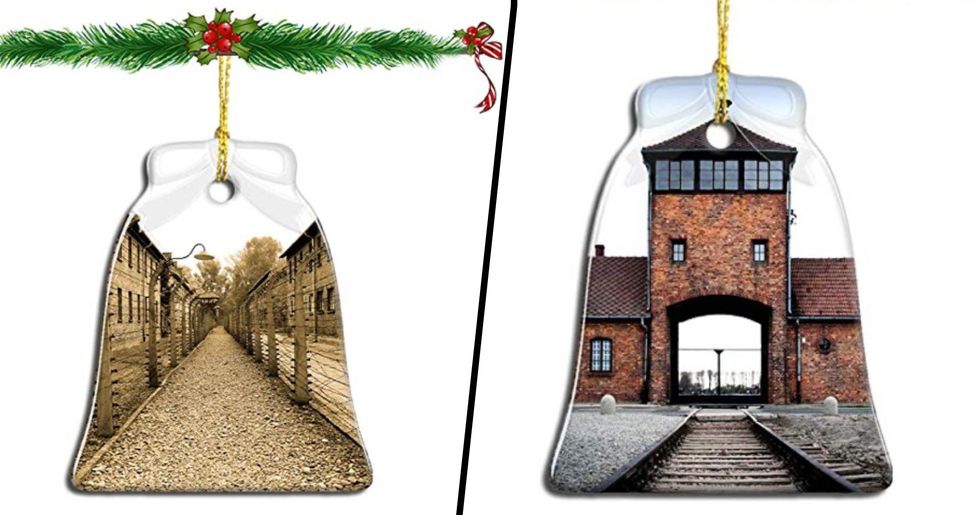 It is a universal fact that a horrible atrocity in history took place at the Auschwitz concentration camp in Poland.

It is estimated that 6 million Jewish people died during World War II during the Holocaust, and Auschwitz was the place were a lot of innocent people lost their lives.

So, it is not much of a surprise that Amazon has recently come under fire for selling Auschwitz themed Christmas ornaments.

During World War II, our world witnessed a huge mass-murder.

Around 6 million Jewish people were mercilessly murdered during the 1930s and 40s when Nazi Germany invaded many parts of Europe and began their extermination of Jews.

Nazi Germany was under a fierce dictatorship...

To the anti-Semitic Nazi leader Adolf Hitler, Jews were an inferior race - an alien threat to German racial purity and community - and he spread this message across his nation.

After years of Nazi rule in Germany, during which Jews were consistently persecuted, Hitler’s “final solution"- now known as the Holocaust - came to fruition under the cover of world war, with mass killing centers constructed in the concentration camps of occupied Poland.

There were a lot of concentration camps opened by the Nazis across Europe...

Each of the 23 main camps had subcamps, nearly 900 of them in total. These included camps with euphemistic names, such as “care facilities for foreign children," where pregnant prisoners were sent for forced abortions, for example.

The treatment of the innocent people in these camps was horrific...

And millions suffered endlessly at the hands of the Nazis.

Auschwitz was one of the biggest camps...

Located in Krakow, Poland, Auschwitz was established in 1940 and it was transformed into an extermination camp 2 years later.

Auschwitz is the home to one of the biggest mass murders in human history.

Precise numbers are still debated, but according to the US Holocaust Memorial Museum, the German SS systematically killed at least 960,000 of the 1.1-1.3 million Jews deported to the camp

Soviet soldiers entered the gates of Auschwitz on 27 January 1945...

Thus putting an end to the merciless murders of innocent Jewish people.

And it is now a museum and a memorial for the millions of lives lost during the Holocaust.

People visit the former camp to learn about the history and pay their respects...

So of course, not taking selfies and posing for photographs is kind of an unwritten rule when visiting Auschwitz.

Auschwitz has it's own range of memorabilia on sale...

But when we say memorabilia, we mean items such as books and DVDs that give an insight into the history of WW2 and the Holocaust.

And this is exactly what a seller on Amazon has done.

The online retailer had a range of Auschwitz themed Christmas decorations on sale...

These include star and bell-shaped Christmas tree baubles featuring photographs of the death camp, and even a magnetic bottle opener that featured a scene from the camp described as "the former Jewish district in Krakow."

People were horrified by the products...

In a review on the Amazon site, one shopper also wrote, "This is not Krakow… This is a picture of Auschwitz-Oswiecim death camp. This is a Christmas ornament? How dare you!"

The ornaments are tasteless and disrespectful...

"Christmas ornaments? Is there no bottom to the pit into which people will sink???" another disgusted user wrote.

The official Auschwitz Memorial page on Twitter shared their opinions...

"Selling 'Christmas ornaments' with images of Auschwitz does not seem appropriate. Auschwitz on a bottle opener is rather disturbing and disrespectful. We ask Amazon to remove the items of those suppliers," they wrote.

It seems that Amazon took note of the backlash...

As they have now reportedly taken the ornaments - which retailed for $12.99 - off sale.

@amazon An @amazon spokeswoman said in a statement that the products had been removed and that “all sellers must fo… https://t.co/Oh2Ia12nFg
— Auschwitz Memorial (@Auschwitz Memorial)1575268538.0

An Amazon spokesperson told Metro, "All sellers must follow our selling guidelines and those who do not will be subject to action, including potential removal of their account."

It is still unclear who was behind the selling of these products...

@AuschwitzMuseum @amazon It disturbs me greatly that anybody could possibly think any of that would be even remotel… https://t.co/9xm3Vuz03j
— Ray Sharradh (@Ray Sharradh)1575226717.0

And people are still voicing their frustrations over the ignorance of the manufacturing of these items.

The Holocaust isn't something to be merchandised.

It is a horrific part of human history that should be preserved and respected, and not cashed in on in the name of a small business.