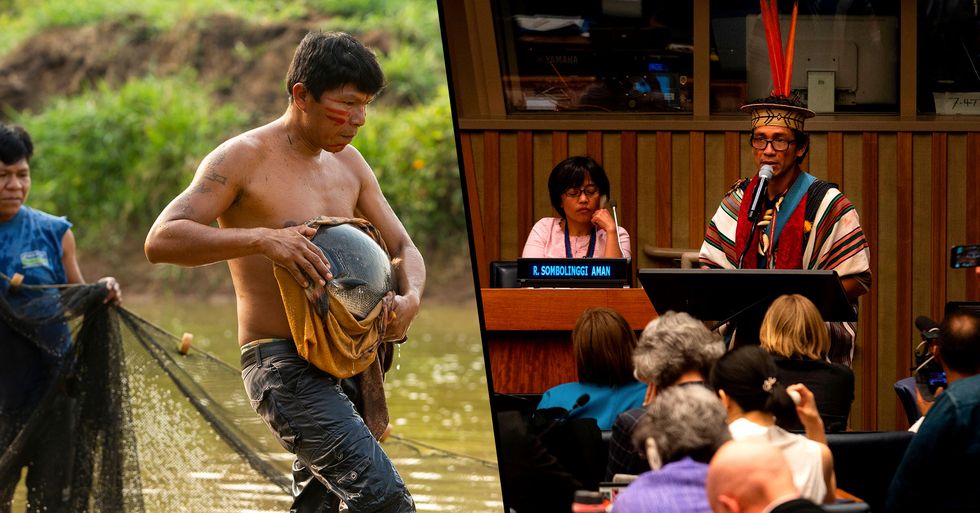 The incredible news has just come in that an Amazonian indigenous community has finally won its twenty-four-year lawsuit against illegal loggers deforesting their home in the rainforest.

And the most recent destruction of the Amazon is perhaps the most galling.

Lasy year, the Amazon Rainforest was rampaged by an enormous and terrifying forest fire. Deforestation has been primarily blamed for the cause of these out of control infernos.

For some reason, this fire didn't attract many headlines.

And many truly horrifying images were shared online. There are now fears that we may end up losing all, or most of, the absolutely enormous forest.

For every minute that the fire was burning...

Another huge area of the Amazon was lost. And once it's gone, the forest as we know it will never come back, meaning that there should be a real sense of urgency.

But the burning forest snaps weren't the only horrific images shared.

Because, as the blazes raged on, the effects that the huge fire is having across the entire continent are becoming clear.

And an even more immediate worry soon arose...

Many believe that Sao Paolo and other major cities in Brazil and South America are essentially uninhabitable. We can't imagine that breathing in that dark, smoky air is in any way healthy.

But what people always seem to forget is that the Amazon has been the home to so many tribes for centuries now.

These Amazonian tribes have faced threats for years now, and as dangerous as these fires proved to be, they have had bigger fish to fry over the last few decades.

Indigenous tribes have always been battling against deforestation...

And it seems that one tribe has finally got the justice they deserve... twenty-four-years later.

The tribe in question is the Amazon's Ashaninka indigenous community.

This community consists of between 25,000 - 45,ooo indigenous people living in the rainforests of Peru and the State of Acre, Brazil.

And their current threats are from oil companies, drug traffickers, colonists, illegal lumberers, illegal roads, and diseases brought by outsiders.

But for decades, the tribe has been battling deforestation...

And sadly, many of the people in this community have had to watch helplessly as their home is slowly destroyed around them.

This is the year in which they first filed a lawsuit against the timber companies who had been illegally deforesting their land since the 1980s.

The Cameli family was the main focus of this lawsuit.

As reported by Mongabay, between 1981 and 1987, the Cameli family’s timber companies illegally cut down thousands of trees on the Kampa do Rio Amônia Indigenous Reserve. During that time period, the Cameli family deforested a quarter of indigenous reserve’s land, which is located on the edge of the state of Acre, Brazil... just to sell wood to the European furniture industry.

The case made its way through Brazil’s judicial system...

And got as high as Brazil's federal Supreme Court in 2011 — but at that point, the case stalled, according to the Latin Post.

But on April the 1st of this year, the case finally came to a close.

It has unbelievably taken twenty-four-years...

But the Ashaninka community has finally seen justice and their home can go undisturbed for the foreseeable future.

This is wonderful news...

And all we can do is hope that this will make a huge difference to the deforestation problem that currently stands in the Amazon rainforest.