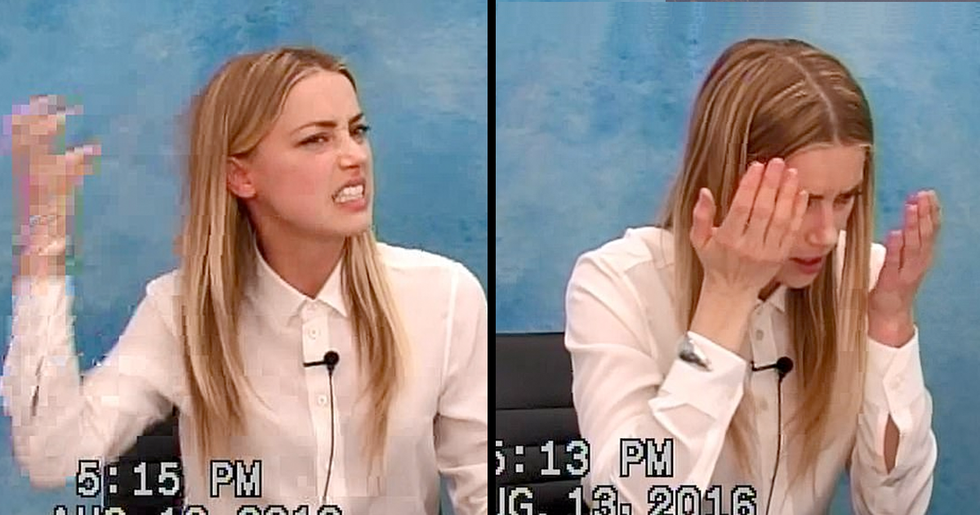 Amber Heard filed for divorce 2 years ago claiming Johnny Depp was abusing her.

At first, people supported Heard but recently the tables turned.

In 2018, Depp filed a lawsuit against Heard for allegedly defaming him with her abuse allegations.

He provided names of several witnesses and even eighty-seven videos as evidence that he was the actual abuse victim.

Now, a new video has been made public from a lawyer meeting in 2016.

Heard can be seen crying and struggling to describe one specific incident during which Depp supposedly "yanked" her head back and forth, hitting her in the face.

Heard has explained what happened during that night which involved her friends, Depp's security guards, and a 911 call.

Depp has responded to her allegations.

Read on to find out more about Heard's detailed account of the incident and why The Jakarta Post believes both Heard and Depp might be at fault.

According to The Jakarta Post, Heard claimed her ex-husband used to hit her when he was drunk and angry. She provided photos to support the allegations and even a video showing Depp flinging a wine glass.

She said that would happen when Depp lost his temper.

At first, even though Depp's ex-wife Vanessa Paradis and best friend Doug Stanhope assured everyone that he would never hurt a woman, people were on Heard's side.

The two even went as far as calling Heard a gold-digger and a liar.

It has been a couple of years since the couple's case was settled in court. So, why are we still talking about it?

Turns out, people are changing sides now that Depp has filed a fifty million dollar defamation lawsuit against Heard.

He has provided evidence that it was, in fact, him who was abused in their relationship. Naturally, some of that evidence has been made public.

It was Heard's comments about the domestic abuse in a 2018 Washington Post article that made Depp take legal action.

Depp's complaint said: "The op-ed depended on the central premise that Ms. Heard was a domestic abuse victim and that Mr. Depp perpetrated domestic violence against her."

It said that all of Heard's claims were "categorically and demonstrably false."

The complaint also added that there are 2 police officers, third-party witnesses and eighty-seven surveillance footage that can prove Heard was lying.

As examples of Heard's abusive behavior include punching, kicking, and staging her attacks.

A photo was leaked showing Depp's black eye which had allegedly been caused by Heard because he was late for her birthday dinner on April 21, 2016.

The complaint also claimed that Heard had thrown a vodka bottle at Depp which gave him a hand injury.

Meanwhile, at one point in 2016, TMZ reported that Depp accidentally sliced his finger and supposedly wrote "Billy Bob" on a mirror because he believed Heard was cheating on him with Billy Bob.

But at the time it was reported that Depp actually got injured while abusing Heard.

Depp's complaint also stated that Heard had been previously arrested for "violent domestic abuse and having confessed under oath to a series of violent attacks on Mr. Depp," and that she lied about Depp abusing her to help advance her career. This prompted further investigation.

Back in August 2016, after Heard filed for divorce, she had a meeting with her and Depp's lawyers.

She wanted to give her recollection of one specific incident she had with Depp - the time he allegedly "yanked her by the head" and "smashed his phone in her face," according to Daily Mail. Depp wasn't there.

Heard was crying and struggling to describe the beating.

The incident supposedly happened at their home in LA on May 21, 2016.

Last week, Heard attempted to dismiss his lawsuit against her by filing a written statement about the incident.

In it, she says she had gone home to discuss their relationship with Depp. At one point during the night, she texted their friends and neighbors, Rocky Pennington and her husband Josh, to come over because Depp was becoming "erratic."

She also called her friend iO Tillett Wright, hoping that she would "mollify" him.

Wright has repeatedly claimed to be a witness of Depp's abusive behavior towards Heard and that night, whilst on the phone with Depp, she yelled for Heard to leave the house fearing she might not be safe.

Heard said during her meeting with the lawyers: "All I remember is him screaming these expletives at my friend iO and telling her that she could have me now."

"Then he put his arm back and he threw the phone as hard as he could at my face."

"I start crying and I, he approaches me.... grabs my head, takes a fist full of my hair and said, 'I hit your eye, huh? Let me see where I hit your eye. What if I pull your hair back?'"

"He is smacking my face, moving my face and he's got me by the hair and he's, it's hard to describe it's almost like yanking me from side to side with my hair."

"He's still holding on to my head at this time and he said, I don't know if he's trying it grab my face but he's yelling at me, screaming, 'See how hard I hit you.' I am screaming at the top of my lungs, 'Help, help, please, help.'"

As this was happening, Wright was still on the phone and called 911.

Heard said she didn't know if Wright was still listening but hoped she was.

Eventually, Heard tried to draw Depp's guards' attention, "even though they never respond," she said.

"I am screaming as loud as I can," Heard continued. That's when Pennington arrived and entered the apartment using her own key. Depp let go of her.

Heard said she then "'retreated' to a couch and cowered."

Supposedly, Depp then yelled at her, "Get the f*** up, Amber," repeatedly.

Watch her describe the alleged abuse in the video below.

Eventually, Depp's security guards ran in and yelled: "Boss!" Heard then left the house and went to the next-door penthouse where her friends lived.

She called her lawyer for advice.

Police arrived, but Heard refused to tell them what had happened, worried it would be bad publicity for her and Depp.

She later filed for a restraining order.

Daily Mail says Heard's description of the incident "is one of many given in the documents her attorneys filed in court."

Depp's lawsuit against Heard claims she defamed him with these abuse allegations.

However, Heard claims she never actually referred to her abuser using his name and never did so publicly.

When the two got divorced in 2017, Heard received $7 million which she donated to The Children's Hospital of Los Angeles.

What was Johnny Depp's response to her allegations?

The actor's representatives responded with reference to an incident Heard had previously had with her ex-wife Tasya van Ree.

Van Ree had eventually dropped all charges against Heard, saying she never abused her.

However, Depp's representatives said: "A hoax confronted with the reality of evidence requires new lies to sustain itself. "Yesterday’s filing, made by a woman with a prior arrest and incarceration for domestic abuse, presented Amber Heard’s new lies."

The video below is from the same divorce meeting in 2016.

Heard can be seen avoiding to answer the question of whether she'd ever hit Depp.

In the midst of conflicting evidence, who should we believe?

The Jakarta Post says both. That's because: "Even if Johnny was abused by Amber, it’s possible that he would’ve fought back."

The most important thing is, their messy case should not be seen as standard.

As sports-writer, Lena Blietz has tweeted: "As we continue to learn more about Johnny Depp/Amber Heard... "I think now is a good time to remember that if Heard did lie, she's the exception, not the rule, most domestic violence reports are not fabricated. "This is a fact."

She added in a subsequent tweet: "Interesting how men seem so much angrier about this one instance of a woman *allegedly* lying than they are at the other men in this world who are actual abusers."

"And it should go without saying that [...] domestic violence is unacceptable regardless of gender."