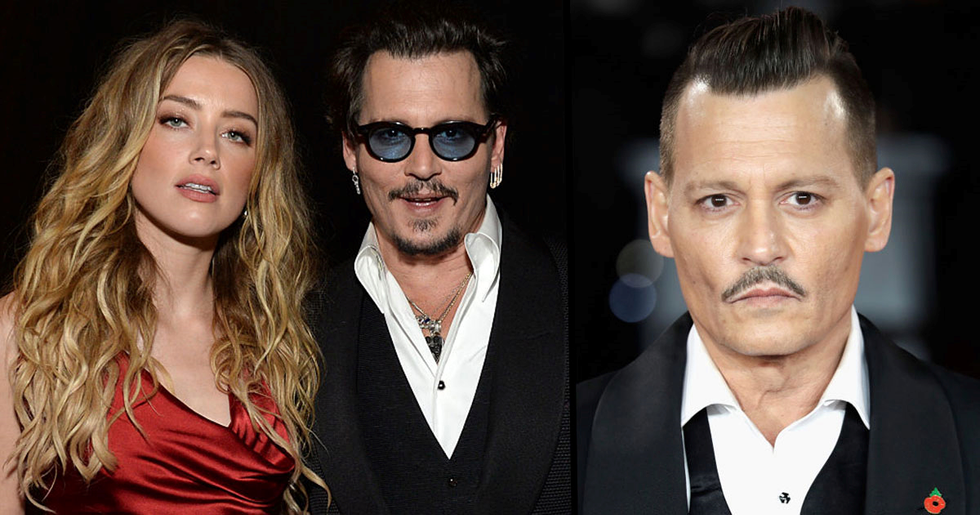 Their Hollywood romance turned sour pretty damn quick, but it's the revelations since their divorce that have really shocked the world.

First, it appeared that Amber was a victim of Depp's violent and drunken outbursts and that she had no choice but to divorce him for her own safety. Then it was alleged that she had fabricated the abuse so that she could get her hands on Depp's fortune.

And now, the tables have tunned with Depp accusing Heard of physically assaulting him.

Who are we to believe?

Well, after reading recently revealed court papers detailing the last message that Amber sent to Johnny, we know who our bet is on... keep reading to find out exactly what she said.

They made such a good looking couple when they first got together in 2009.

Meeting on the set of The Rum Diary where they actually starred as lovers, a mutual attraction was evident.

But signs that their relationship was not destined to be a smooth one were evident from the very beginning.

As when they met on the film set, they were both, in fact, seeing other people. Johnny was with his partner of 14 years, Vanessa Paradis and Amber actually had a girlfriend, photographer Tasya Van Ree.

But obviously, they both split from their respective partners and soon became Hollywood's hottest new couple.

And Johnny liked nothing better than to lavish his new beau with gifts. Nothing weird there. Many men do the same.

Except Johnny's choice of gift was a little unusual.

So apparently Johnny Depp just bought Amber Heard a horse, which makes me wonder when my unicorn is going to arrive. Thanks, Johnny!
— CourtneyPants (@CourtneyPants)1340474612.0

He bought Amber a horse. Apparently, he was so smitten that he wanted to buy her something extravagant that she would never forget. Well, we all know that Johnny loves to spend a few (million) dollars or two whenever it takes his fancy but even still . . .

Clearly, Amber was bowled over by Johnny (or his generosity).

As they then got married. On Johnny's own private island in the Bahamas! Which apparently he bought with the money he made from the Pirates of the Caribbean franchise.

And talking of Pirates of the Caribbean, during filming it was said that Johnny badly injured his hand.

Johnny Depp injured while filming Pirates of the Caribbean 5. Production minimally impacted. He will undergo surgery for a hand injury.
— Nerd with Balls (@Nerd with Balls)1426085522.0

But it was later revealed that he got the injury from punching a wall during a very heated argument with Amber. But could this have just been an isolated incident?

It soon became apparent that Johnny was very much the jealous type, at least when it came to Amber. And another very fiery argument resulted in him slicing off the end of one of his own fingers, apparently.

The incident reportedly took place only a month after the pair married.

Who could have predicted that it would take Johnny Depp painting a wall with blood from his severed fingertip to make Billy Bob seem tame?
— Annie Heckenberger (@Annie Heckenberger)1471396593.0

Johnny was said to have been smashing bottles in a fit of rage about Amber's relationship with her co-star, Billy Bob Thornton (Johnny suspected that they were having an affair). Apparently, he even used the blood from his severed finger to write insults about Thornton on a mirror. But this isn't the end of this story... keep reading for more revelations.

It wasn't only violence that marred their relationship.

Amber also claimed that Johnny was often under the influence of alcohol and illegal substances and that this badly affected his judgment and the way he behaved around her.

He was notorious for being unreliable because of his substance abuse.

He was known for turning up late to the filming of the Pirates of the Caribbean movies and often kept hundreds of people waiting on set for him.

He even allegedly showed up late and inebriated for Amber's birthday party in 2016.

Wherein Amber claimed that he threw a bottle of champagne at a wall and a glass of wine at her. It would appear that this was the beginning of the end as the couple split only a few days later.

All this happened within days of Depp's mother passing away.

Fans of Depp were angry that Amber chose to separate from him at this difficult time in his life, but it soon became clear that it wasn't just his behavior at her birthday that caused her to end their marriage. A lot more was yet to be revealed...

As with any high profile divorce, private details of their marriage started to be uncovered.

Details that they probably would have preferred to be kept a secret. Like the video that was leaked of the couple in their home wherein you can see Depp swearing, drinking copious amounts of wine and generally smashing up the place.

The couple finally divorced in January 2017, but this was not the end of the Johnny and Amber saga. Far from it.

Shortly after the divorce, details of a 911 call that was made following a domestic disturbance dispute a Depp's house were released The call was made by Amber's friend, iO Tillett Wright, and depicted a very violent relationship between the couple with ongoing incidents of kicking, choking and punching. But when the police arrived at the scene they found no evidence of violence. Strange...

But Amber was apparently so scared of Depp that she took out a restraining order against him.

With Heard convinced that Depp would try to emotionally and physically harm her during the court proceedings. So during the whole divorce process, Depp had to keep a minimum of one hundred feet away from Heard.

Even though in their joint statement she stated that it was their relationship that was volatile, not Depp himself.

@chloebushx @Friggdottir And Amber Heard and Johnny Depp have their JOINT statement after their divorce stating the… https://t.co/MHRm9iFpnq
— Chele Cooke (@Chele Cooke)1512946032.0

Although, if you read the words carefully, it does say that no physical harm was intended, not that it didn't occur at all. But who was being harmed?

Not all were convinced that Heard was as innocent as she seemed.

Amber Heard: Johnny Depp abused me and he doesn’t remember anything. Also I don’t have any evidence can submit to t… https://t.co/lr8xzjWoRM
— aujosiez (@aujosiez)1555033758.0

Depp's friends, fans and legal team were keen to portray Heard as a gold digger who only ever wanted one thing from Depp: money. According to them, the whole domestic abuse claims were just her way to get more of his money. Who were we to believe?

Heard later spoke out about standing up to sexual violence in the Washington Post.

And even though she did not mention Depp by name, Johnny reportedly launched a defamation action against her and sought $50 million in damages. Heard retaliated by filling more than three hundred pages of documents detailing the alleged abuse including photographs.

But Depp refused to stand down and said that it was Heard that abused him.

Claiming that Heard, after mixing prescription amphetamines and other non-prescription drugs with alcohol, lashed out and repeatedly punched and kicked him. He also claimed that she threw bottles, burning candles and paint cans at him,  leaving him badly hurt. And he also attached photographs of himself with a black eye as evidence.

He also claimed that the night that he severed his finger was a result of Heard's temper, not his.

He reports that she was the one to throw a broken glass bottle which led to his finger being badly cut.

And now papers have been released in which Depp speaks about the alleged abuse on both sides.

He said: "When I did not accede to her demand for money, Ms. Heard publicly accused me of domestic violence, seeking and receiving a temporary restraining order against me when appearing in Los Angeles Superior Court, May 27, 2016, with a first-ever-seen prominent bruise and cut on her face."

He then went on to say that the injuries were staged.

Stating: "This domestic violence allegation was untrue, and Ms. Heard's purported injury was staged. I never abused Ms. Heard or any other woman. She was the perpetrator and I was the victim."

And he brought up an incident that happened ten years ago between Heard and her ex-wife.

Stating: "Ms. Heard was arrested in Seattle Tacoma International Airport in 2009 after police officers observed her committing domestic violence against her then wife -Tasya Van Ree." Although Heard was not charged, she did spend a night in jail and had to appear before a judge.

He then went onto mention other women from Heard's past who have claimed to have experienced abuse at her hands.

Saying: "Several women who have been in a relationship with Ms.Heard have come forward to share their personal experiences of brutal violence and other abuse at the hands of Ms. Heard." He continued to say that his law team was interviewing these women, but that they all still remain scared of Heard.

And if that wasn't enough to seal Amber's fate, this shocking text message will definitely do it.

According to Depp the last message that Heard sent him ahead of their divorce battle said that she and Depp could "do this or undue (sic) this as we see fit. You and I have the control. And love each other." Does that seem like a victim of domestic abuse to you?

How did she have the gall to mention love?

The text continued: "I thought you filed [for divorce]. You said you were going to and said goodbye. I'm sorry if I've hurt you. I have nothing but love for you."

Now, if this text message is real, this definitely sheds new light on the state of their relationship at the time of their divorce.

Especially given that she has now been forced to admit that she physically abused Depp on at least one occasion.

The documents also refer to the alleged sh*tting in Depp's bed incident.

With Amber having apparently said that it was just a harmless prank.

Surely, this will be enough to convince all the doubters who the real abuser is?

We know what we think, but who do you think is telling the truth?