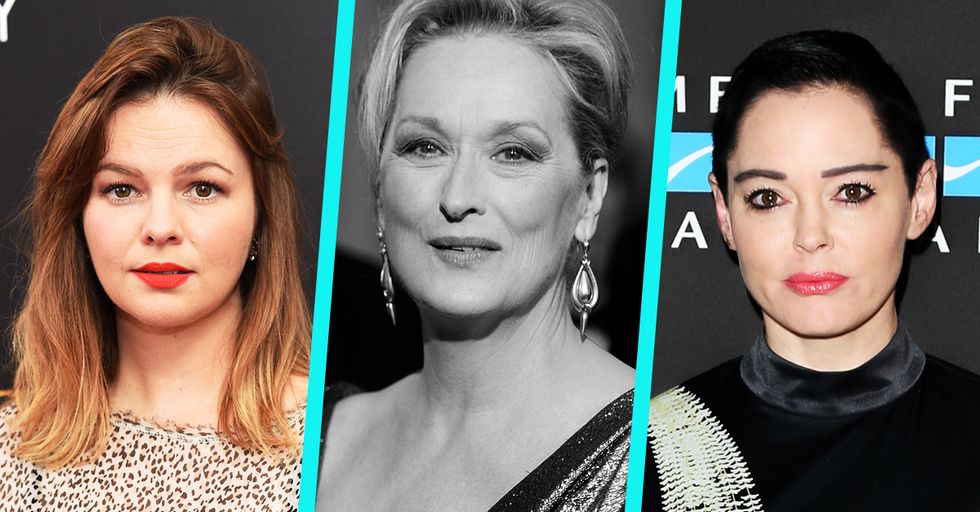 The Golden Globes is one of the most anticipated fashion events of the year. Actresses and their teams spend months combing the runways for the perfect dress that'll allow them to make that all important statement on the red carpet, which glossy magazines and other press outlets will dutifully and breathlessly dissect.

It's one of the most celebrated Hollywood spectacles, but this year, actresses might be making a change.

Actresses will dress in black at the 2018 #GoldenGlobes in show of solidarity for harassment victims:… https://t.co/dZU5djRfPz
— Audrey Beaulac (@Audrey Beaulac)1513370716.0

In early December, reports emerged that major actresses were planning to wear black to protest sexual assault in Hollywood. Multiple sources confirmed this to silent protest to PEOPLE.
Some sources say this trend will last all through awards season, although only the Golden Globes have been (somewhat) confirmed. "All female actresses attending the Globes are protesting by just wearing black gowns," a source said.
They have good reason to protest. Reports of sexual assault have roiled through Hollywood and major industries since October, when former Hollywood mega-producer Harvey Weinstein was accused of sexual assault by over 50 women. In the aftermath, numerous allegations of sexual misconduct have emerged across the spectrum, with accusations felling a myriad of high profile men including Brett Ratner, Matt Lauer, Louis C.K., etc.

One person, however, was not pleased by the silent protest. Rose McGowan, one of Harvey Weinstein's chief accusers and a primary figure in the sexual assault scandals took to Twitter to clap back against other actresses.
"Actresses, like Meryl Streep, who happily worked for The Pig Monster, are wearing black @GoldenGlobes in a silent protest," McGowan wrote in a now-deleted tweet. “YOUR SILENCE is THE problem. You’ll accept a fake award breathlessly and affect no real change. I despise your hypocrisy. Maybe you should all wear Marchesa." By Marchesa, McGowan was referring to the fashion brand co-founded by Harvey Weinstein's estranged wife, Georgina Chapman, which he reportedly forced the actresses working on his films to wear.

McGowan's vitriol against Streep likely stemmed from Streep's long history of working with Weinstein, who produced some of her starring vehicles including August: Osage County, and The Iron Lady, for which she won a best actress Oscar.
Streep has commented on the Weinstein accusations by calling his accusers "heroes," and saying his behavior was "disgraceful," "inexcusable," and an "abuse of power," according to the Huffington Post.  She further stated:

I didn’t know about these other offenses: I did not know about his financial settlements with actresses and colleagues; I did not know about his having meetings in his hotel room, his bathroom, or other inappropriate, coercive acts. And If everybody knew, I don’t believe that all the investigative reporters in the entertainment and the hard news media would have neglected for decades to write about it.

One person was quick to defend Streep. Actress Amber Tamblyn, a friend of McGowans, slammed the actress's actions on Twitter, writing that her actions were "beneath [her]." Tamblyn, who has also been vocal throughout the scandal, spoke out about actor James Woods' predatory behavior about a month before the scandal erupted.

Just as you thought things couldn't get any convoluted, actress Holly Marie Combs, McGowan's Charmed costar, criticized Tamblyn for publicly attacking McGowan. “You just did to @rosemcgowan what you claim you don’t support her doing to others. Every activist for every cause the world over has different methods but share a common and more important message that should remain the same," Combs tweeted. “And undiluted above all else."

To this, Tamblyn replied, "Her statement was public and hurtful to some women so a public response was earned. I spoke to her at length today, she knows how I feel. I love Rose fiercely, that will never change. To be critical of an action is not to condemn the person behind it. There’s your common message." Read the thread here:

THREAD: Rose McGowan is a friend and while I support her kind of movement, I do not support any woman (or man) shaming or taunting the movements of other women who are trying to create change. Telling us to all wear Marchesa? This is beneath you, Rose.

You just did to @rosemcgowan what you claim you don't support her doing to others. Every activist for every cause the world over has different methods but share a common and more important message that should remain the same. And undiluted above all else.

My god. This isn't fucking high school. Get over yourselves. Most of us don't have your huge platforms to address our pain & are asking you to amplify our voices. Please stop this bickering & recognize that we are all fighting in the best way we can. @AsiaArgento @Alyssa_Milano

You don’t have to support and stand with us, but we stand and support you. You may take below the belt shots at us but we will not take them at you in return.

Our movement is big. And a black dress is just the beginning of the darkness that will be drained from every industry across the country by the time we’re done. That’s a promise.

And we stand together in this fight, shoulder to shoulder, weapon to weapon, woman to woman (and man), body to burned body. And our arms are open. And our hearts two fold. And our fire will be a universal scorch. Heed the mantra: #ChangeIsComing

My god. This isn't fucking high school. Get over yourselves. Most of us don't have your huge platforms to address our pain & are asking you to amplify our voices. Please stop this bickering & recognize that we are all fighting in the best way we can. @AsiaArgento @Alyssa_Milano