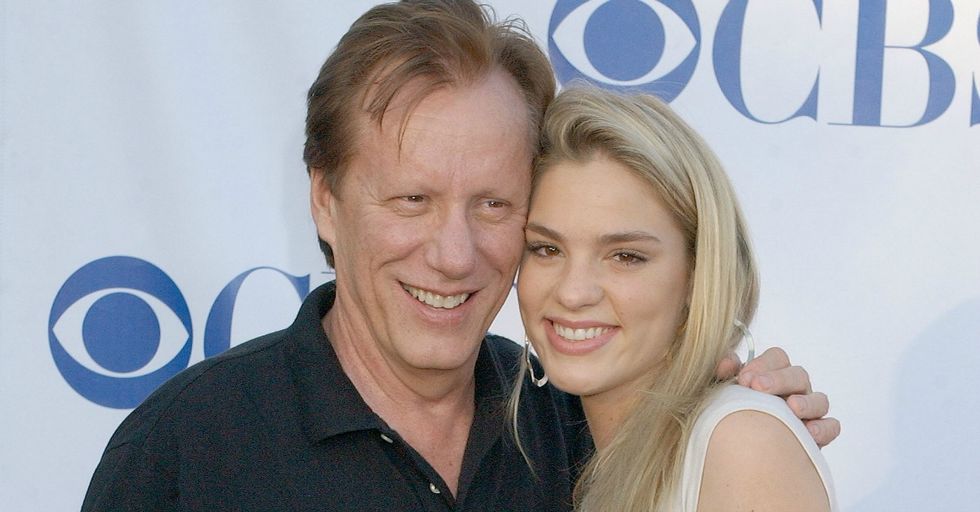 James Woods is a Bad Guy.

He also plays one on screen. The ultra-conservative and intensely outspoken actor is making waves again for his unjust comments, this time about the age difference between gay characters in an upcoming movie.

Actress Amber Tamblyn stepped in to show the world just how hypocritical (and super gross) Woods is being.

But Tamblyn wasn't the only celebrity to get involved...

James Woods has quite a reputation.

When he isn't attacking the White House in movies, he's tweeting crazy things about statues or attacking LGBT children in real life.

And his latest attack is stunning for one reason — it's amazingly hypocritical nature.

Call Me By Your Name is a huge hit on the festival circuit. The film, which stars Armie Hammer (The Social Network), is a romantic drama about a graduate student who falls in love with his professor's underage son. It's a story involving a 24-year-old man falling for a 17-year-old, and some took issue with the film.

Chief among those detractors was James Woods.

In response to Chad Felix Greene's tweet, Woods tweeted, "As they quietly chip away the last barriers of decency. #NAMBLA" "NAMBLA" refers to the North American Man/Boy Love Association, which is a pedophile advocacy group that works to abolish age-of-consent laws — it's a dangerous organization that has no affiliation with the LGBT community.

Armie Hammer, who stars in the film in question, clapped back immediately.

James Woods started dating Ashley Madison (pictured above and yes, that's actually her name) when she was 19 and he was 60. They broke up when he was 66, and then he started dating 20-year-old felon, Kristen Bauguess. The guy has a habit of dating much younger women, which makes his complaints about a 7-year age gap between movie characters just a tad inappropriate. But that's not even close to where this story ends...

Tamblyn has had a long career. You might have seen her as Tibby in The Sisterhood of the Traveling Pants or as Jenny on Two and a Half Men. She's been in the biz since her teenage years.

And that's exactly when she was propositioned by James Woods, who was much older than her at the time.

In response to Woods, Tamblyn shared that one time when Woods hit on her and asked her to accompany him to Las Vegas. When she told him she was 16, Woods apparently replied, "Even better." Gross gross gross.

Woods immediately backed away from the allegations.

He called Tamblyn's story "a lie." Yeah, you're not going to get off easy with a line like that, bucko.

Tamblyn shot back with a screengrab of a text convo in which at least one other person confirmed her story.

People not believing women when it comes to their experience with predatory men — it's an epidemic, and Tamblyn was not going to stand for it.

Other celebrities jumped to her side.

Don Cheadle's Jeopardy reference reads like a joke, but it's actually a pointed jab at men who think they're indestructible because no one will believe women's stories. But Cheadle wasn't done...

Lies will not work.

Predatory men like James Woods can no longer run from their hideous habits with lies. Women are strong, and they will come for you.

Tamblyn is not about to be silenced.

Women's stories of inappropriate behavior and abuse from men are not rare. They're much more common than they should be. And we can only hope that this paves the way for other women to speak up. There are many more of these stories than we hear about. It's time for that to change.

In an open letter to Woods published in Teen Vogue, Tamblyn lays it all out on the table.

"Dear Mr. Woods," she wrote. "What you are experiencing is called a teachable moment. It is called a gift ... Since you've now called me a liar, I will now call you a silencer. I see your gaslight and now will raise you a scorched earth." Tamblyn goes on to describe exactly what happened the night Woods propositioned her when she was 16. Then she continues, "The saddest part of this story doesn't even concern me but concerns the universal woman's story. The nation's harmful narrative of disbelieving women first, above all else ... So it is with hope, Mr. Woods, that I ask you to go inward now and ask yourself the hard stuff ... "Are you and your history with women and girls a part of the problem, Mr. Woods? "Go now and look in the mirror and ask yourself if this is true. Go on, I'll wait. But I won't hold my breath."