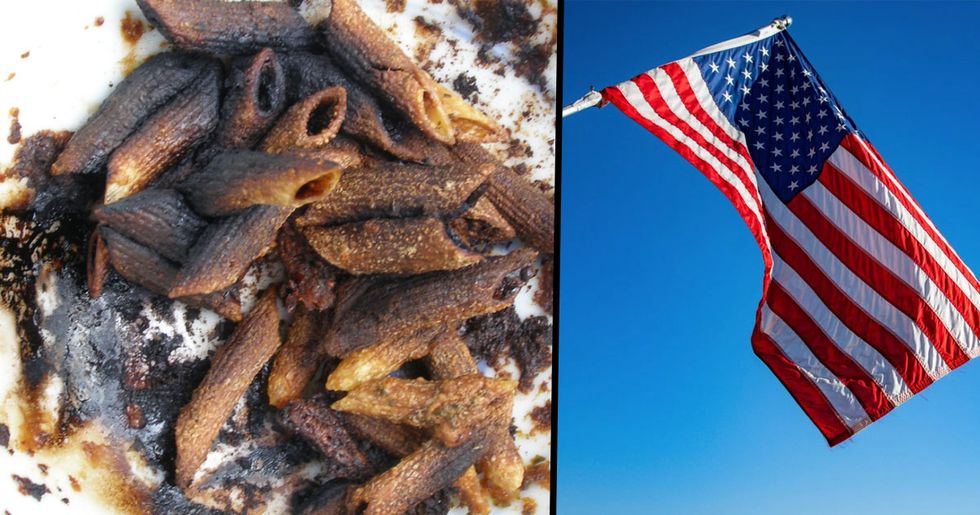 Ah, to be twenty and in college again... I never set my spaghetti on fire, though.

Despite all the information there is online about safe cooking, 3 American exchange students managed to catch their pasta on fire.

Italians who had read the story were very entertained by the girls' unsuccessful attempt at the local cuisine. However, well-known Chef and owner of a Florentine restaurant offered to teach the students (safe) Italian cooking.

He believed he and the rest of the Florentine community hadn't done a proper job introducing these girls to their food tradition, and so wanted to fix that mistake.

The rest of the world found the story hilarious and very relatable. It reminded many former students of their own similar experiences with "fire in the kitchen." Others were simply amused by how stupid students can be.

Who hasn't burnt their food at least once in their life?

Even Gordon Ramsay must have been an idiot sandwich at some point. But he probably never insulted a whole country. Not early on at least.

Obviously, they included some tips on how to stay safe while cooking your dinner.

Their key advice included fire safety in the kitchen.

Stay in the kitchen while cooking. Use only microwave-safe cookware. Don't put flammable things close to the burner...

But they left out one crucial step.

They forgot that, and now look what happened: 3 American twenty-year-old females set their kitchen on fire in Italy.

Italian newspaper La Nazione reported that the 3 students bought some innocent pasta at a local store, then brought it back to their apartment in Florence.

All they wanted was a nice, authentic Italian dinner.

But they skipped the key ingredient that makes spaghetti tasty. Water.

They took the dry pasta and put it into a dry pot.

And since spaghetti doesn't really cook on its own, it instantly caught on fire.

The students didn't know how to put out a stovetop fire, so they called the fire department.

"As a generation and as a Florentine, I feel guilty, I feel there was a strong communication deficit on the part of this city," said Chef Fabio Picchi.

"What did we show to these girls, who came here to study and on their free time tried to make the most traditional dish of our gastronomic culture?"

The girls explained themselves, saying, "We put the pasta on the fire without water, we thought it was cooked like that."

Since no one got hurt, it's really a funny story.

But Picchi says "there's little to laugh about." "It's too easy to just make the joke."

"Instead, we must reflect: why did something like this happen with the Italian dish par excellence?"

"Did we show the world too many fireworks?" It may be, concluded Picchi.

Vice Munchies says they had fun calling out the students for their embarrassing moment and showing off their superiority.

"Return to the USA to eat hamburgers & chips from [McDonald’s]," one wrote.

Another one said, "[F]rom one of those three could come the next US Secretary of State...or the next president!"

He offered them 4 hours of Italian cooking classes at one of his famous restaurants.

"They will have lunch in our restaurant with two of my extraordinary cooks," he said.

"They will teach them the simple basics that are very good if done well. I think this can be useful to them, but also for us. Understanding is what is beautiful and necessary."

The two had just been arrested for using a jar of spaghetti sauce to start a fire in their ex-boyfriend’s house.

The men were also Americans.

Vice Munchies says they had entered the victim’s house, emptied a jar of Ragu into a pot, then placed a washcloth beside it on the stove.

The owner saw someone moving on his security camera and called the police.

The policemen managed to put out the smoldering washcloth before it caught on fire.

"He was trying to make it look like I left the stove on but who gets up at 2 am and fixes sketti?" the victim asked.

Vice joked, "[So] if you see [...] people going into the kitchen with a box of Barilla, just go ahead and call the authorities."

Picchi might not think it was funny, but the rest of the world surely did.

Here’s what people were saying once the story appeared in the news.

Naeem Khan: "Ravioli Ravioli give me the death I deservioli."

Jeff Epperson: "So? Water is disgusting, fish fuck in it." Krystal Rene' Nurse: "They wanted their pasta to be al burnte."

Julia Elizabeth O'Sullivan: "I can't remember when this was but I tried to microwave oats without milk."

Mel Roberts: "As a former campus cop at a big world-renowned University, I can't tell you how many fire alarms are tripped and the fire dept had to come out due to cooking fires by these young 'geniuses' and 'future leaders of the world!'"

Jeff Mozey: "When I was a kid my sister told me to put a cup of ramen in the microwave to cook it."

one of my old tumblr friends and i only communicate now via tagging each other in pasta memes on facebook and i think thats beautiful
— ⊹ rach ⊹ (@⊹ rach ⊹)1550454948.0

He then added, "So of course I shoved it in the microwave with no water and it caught on fire..."

Freya Therese tagged her friend, "Drew Gregory remember when you Skyped me from Switzerland because you didn't know how to cook rice?"

Robert Wilder: "I had a roommate who tried to make fried rice w/out knowing you have to cook the rice first. That was the worst mess I've ever seen in a kitchen."

Luca Xodo: "Why would an American girl in Florence ever have to cook her own pasta, when there are surely hundreds of Italian guys inviting her home for dinner?"

She added, "As the chef said, we are much more hospitable than that."

Josh Hidman: "It could have been even worse."

"They could have used ketchup as an ingredient in the bolognese sauce," he added.

Stefano Naval: "But the USA is full of pasta and noodles and Mac and Cheese is like a national dish ?"