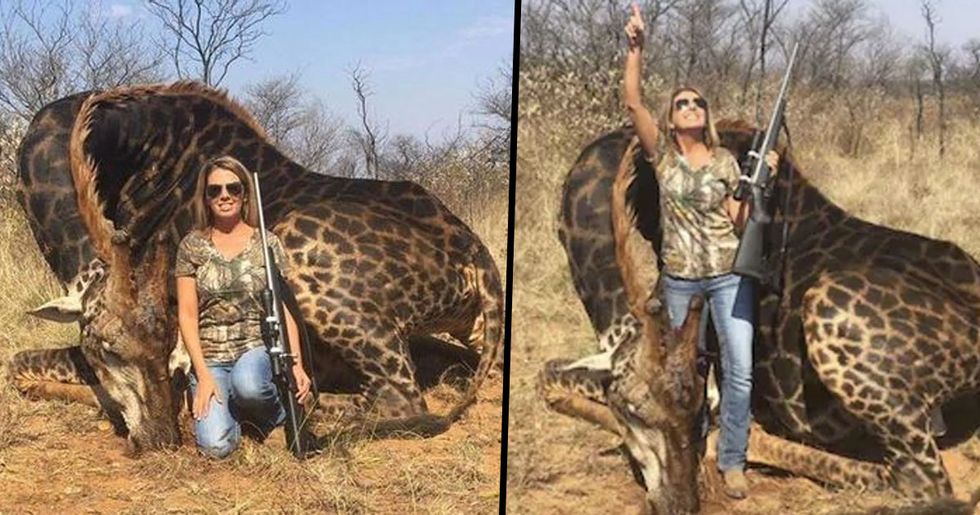 American Hunter Who Killed Rare Giraffe Says She Has No Regrets

If you go on to Twitter or Instagram, the first thing that you wouldn't expect to find is images of animal hunters posing with their kills, but it seems that, in recent years, displaying the animals that you've killed is a growing trend in the online sphere and that trend is now receiving widespread attention - including extreme backlash and, weirdly, a considerable amount of support, too.

One American hunter, in particular, has been hitting the headlines after a picture of her proudly showing off her latest kill went viral last year.

Now, she's spoken out on national television about the images and what she had to say is pretty shocking...

Believe it or not, hunting is a big part of American history.

Prior to the mid-1800s, the hunting industry was very much alive and thriving. Hunting was seen as a full-time job to serve the expanding animal product market. It might have been their job, but it certainly wasn't seen as a past-time... yet.

Hunting never used to be for fun, well, at first it wasn't...

It wasn't until the 1850s that the hunting world completely changed.

Hunting became more and more about receiving an ego boost, with many proudly showing off their kills to get higher up the social rankings.

Tragically, the popularity of so-called "trophy-hunting" began to rise.

Hunting trophies and taxidermied remains of wild animals served as a representation of someone's “hardiness". Sounds ridiculous, right? Some wealthy, "recreational" hunters would even go as far as claiming that they were the only “real hunters" - pitting themselves against those who hunted for food and money.

The rarer the animal, the better.

According to a Pacific Standard article, the rarer and larger the animal and the more extravagant the kill, the better the animals spoke to the hunter's "manliness" and social status.

Fast-forward over a century and you'd think that we would have, well... stopped.

It seems that the rise of social media has given trophy hunters another platform to brag about their kills on. Just one search on Twitter or Instagram can bring up several results of hunters donning gleaming smiles while posing with the lifeless bodies of various species, with many taking to South Africa to seek out the "best" kills - aka, the most endangered animals.

Social media is highlighting the harsh reality of trophy hunting.

Just one search on Instagram brings up thousands of disturbing results. This picture, captioned "Getting it done!!!! 25 minutes in the field and @rich_franki connected on an awesome stallion!!! what does your office look like this morning," shows a pair of hunters proudly knelt behind their kill.

Trophy hunters have pretty much formed a community of thier own.

Many hunters have set up their own Twitter and Instagram pages to share their animal "trophies" with their own community. Hashtags such as #livetohunt and #huntingworld typically accompany the posts.

But one woman, in particular, received significant attention for her trophy hunting picture.

Two years ago, American hunter, Tess Talley, like many other trophy hunters - posted an image of her kill during a trip to Africa.

The image sparked worldwide outrage after it was reposted by Africa Digest on Twitter.

People were quick to slam Talley, and rightly so.

@MesMitch @africlandpost @FrederikaFerrar @Brasilmagic @AleZ2016 She should be on a register. Clearly deranged and a danger to all.
— Harry Frasier (@Harry Frasier)1533625925.0

One user branded Talley "deranged" after seeing the image.

A year on, Talley has gone on national television to explain herself...

The "proud" hunter appeared on CBS This Morning to defend herself against the backlash that she received following the controversial image of her posing with a giraffe that she'd killed.

You won't believe the reason that she gave for killing the giraffe.

Tess Talley is Claiming that she is actually assisting the animal populations by killing them. https://t.co/RL2foo00No
— Owl Mirror (@Owl Mirror)1559921381.0

One word... "conservation". Yes, that's right. Talley, who even runs her own blog centered around her hunting, justified her kill by saying that she was simply doing it in the name of conservation. During her interview, Talley insisted that she was actually helping the animals.

"We are preserving... we are managing herds, we're managing numbers of wildlife," she said.

She showed no signs of regret while being grilled about her hunting trips.

Talley said that she is "proud" to hunt and "proud of that giraffe" while being interviewed on the show. "You do what you love to do. It's joy, if you don't love what you do, you're not gonna continue to do it. "But you gain so much respect, and so much appreciation for that animal because you know what that animal is going through. They are put here for us. We harvest them, we eat them," she said. She also claimed to be  "surprised" by the "crazy" backlash that she received, which saw people showing up at her place of work to try to get her fired. She blamed the rise of social media for the response.

As if it couldn't get any worse, she then revealed what she did with the giraffe afterwards...

Talley was obviously pleased with her kill as she revealed that she made decorative pillows and a gun case out of the giraffe, which she went on to describe as "delicious".

After her interview aired, Twitter was flooded with people showing their disgust towards the hunter.

People were horrified by her actions and attempts to defend herself.

Tess “Cruella de Vil” Talley is proud to shoot a defenseless animal that is on the verge of becoming endangered. Wh… https://t.co/AzI6gfaUFT
— Justin McCarthy🌹🌅 (@Justin McCarthy🌹🌅)1559913124.0

This guy called her a "psychopath".

Some people even slammed CBS for giving Talley a platform...

Many thought that she shouldn't have been able to go on the show in the first place.

Others simply mocked her efforts to justify herself.

Why the heck would #TessTalley agree to go on @CBSThisMorning to explain why she loves to slaughter wild animals as… https://t.co/wRWsJ8PCja
— Jim McFarlin (@Jim McFarlin)1559911099.0

But Talley shows no signs of giving up her "barbaric" hobby.

Despite receiving so much backlash, Talley said that she will continue to hunt. Looks like we won't be seeing the last of her.