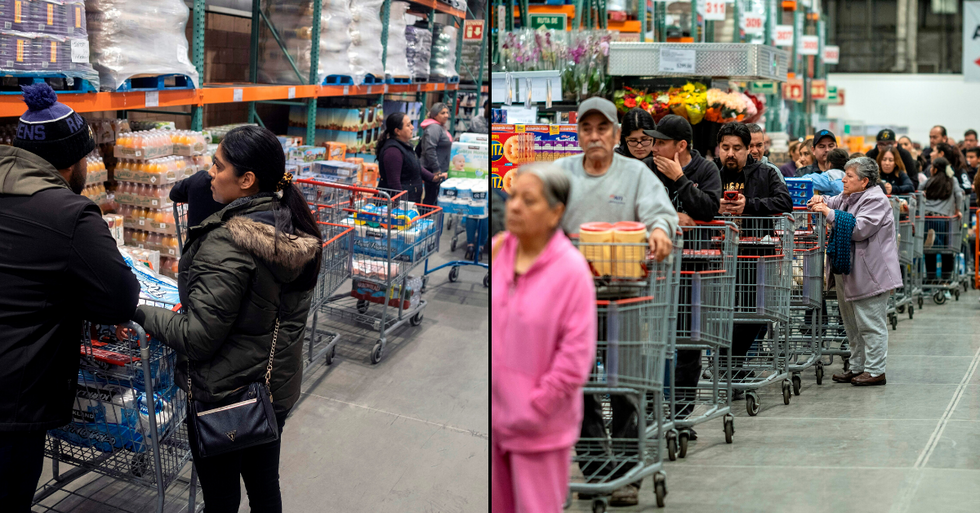 In a sudden turn of events, Americans are attempting to cross the Mexican border... And it's all in the desperate search of toilet paper.

And, currently, there are 247,603 confirmed cases globally. A further 10,064 have tragically died from the virus.

And now, self-isolation has been deemed as the most effective way of combating the virus.

And millions are now quarantining themselves at home for up to 2-weeks at a time.

But, amid all these precautions...

In preparation for prolonged quarantine, people have been rushing to their local supermarkets to stock up on supplies.

It has been truly apocalyptic scenes - Supermarkets have been overcrowded with people frantically stocking up on soaps, sanitizers, toilet rolls, canned goods, and other non-perishable foods.

Oh, alongside thirty cans of tomatoes. Because that makes total sense…

It's all been getting completely out of hand.

People have been literally emptying supermarkets’ shelves of their products, forcing large companies to put regulations in place to prevent people from buying too many things.

Some shoppers seem to be forgetting that other people also need to buy these items.

Many parents have found themselves struggling to provide for their children as a result of the frenzied stockpiling. It's a truly shocking and horrendous situation for everyone.

And, as a result of these obscene stockpiling...

Another thing about the stockpiling idiocy is that they are clearing the shelves of fresh produce which, given ever… https://t.co/HjgIYd2kFq
— Dr Simon Ubsdell (@Dr Simon Ubsdell)1584634585.0

People have had to find alternative ways of getting their hands on the essentials.

Now, we all know that toilet paper has been one of the most sought-after items in this pandemic...

Images and videos of shoppers literally fighting over packets of toilet paper have been circulating social media this month as masses of people desperately stock up.

People have been seriously worried about running out of the stuff...

Okay, it's never nice to be caught short-handed of toilet paper when you need it the most. But this has been extreme.

And, in the last month, people have been even more concerned than usual...

And have been going to extra lengths to stock up.

Yep, several American's have reportedly been crossing the Mexican border in their hunt for toilet paper.

Several American's have been flocking to the Mexican border from South California.

As reported by WKBN 27, more than 600 people were seen queuing outside Tijuana Costco with shopping carts.

Many travelled for up to 3 hours to stock up on toilet paper and other supplies...

With one shopper explaining: "It's tough for us to come down here to get things, but we're going to try it."

Many shoppers have been able to also stock up on beans, rice, bottled water, and cleaning supplies...

All items that have been completely rinsed in the U.S. supermarkets. Another shopper, who had traveled from San Diego, told the news station: "It's still not very bad right now here, they have a lot of products, they're not selling you more than 4 packages of anything, 4 is the maximum."

We can only hope that this craziness will be over soon.

And for those who are still stockpiling - Give it a rest, will you? For more on the coronavirus pandemic currently sweeping the globe, keep scrolling to see the photos people have been sharing during their social-distancing attempts...