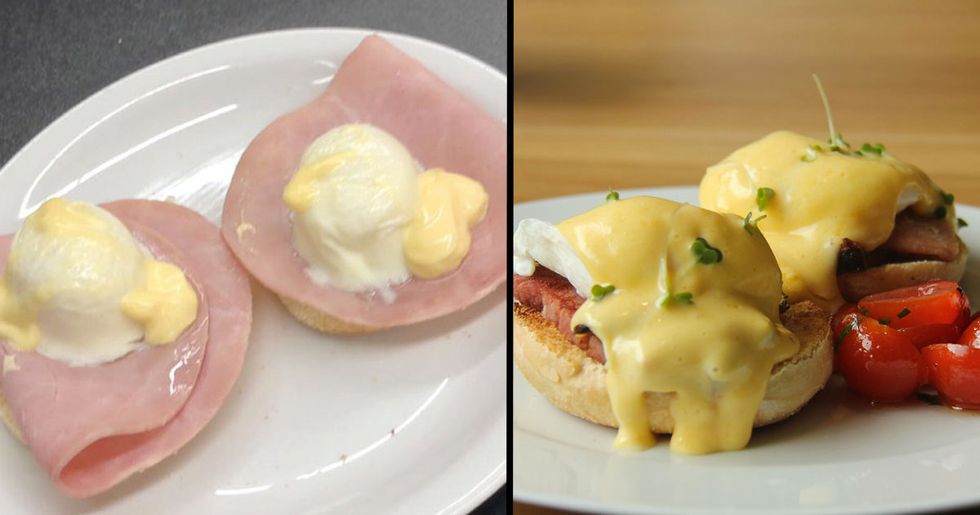 They say breakfast is the most important meal of the day, an opportunity to start things off right. Well, that wasn’t the case for Thomas Hesketh.

When Thomas stopped by his local Tesco, a UK supermarket, for a grocery run and quick bite to eat, the twenty-year-old was pleasantly surprised to find an affordable Eggs Benedict on the menu in the store’s cafeteria.

Unfortunately, decisions made hungry are rarely sound ones. Thomas ended up with a plate of horrors he — and the rest of the Internet — will never forget.

In case you’re unfamiliar with a classic Eggs Benny...

Here’s what it’s supposed to look like. Basically, it’s an egg lover’s dream.

A traditional Eggs Benedict is typically comprised of a toasted English muffin, topped with crispy ham, a poached egg, and fresh hollandaise sauce.

So it’s no wonder Thomas was a little surprised when he was served… whatever this is.

Imagine getting this punishment of a meal when you were expecting a nice, simple Eggs Benedict.

Honestly, did they just squeeze a couple of mustard and mayonnaise packets on a Lunchable?

Sure, if you’re a glass half full type with a great sense of humor (and an iron stomach).

It’s all fun and games until you remember this thing is supposed to be food.

Why are the eggs so tall?

Obviously, Twitter had a lot of feelings about the so-called “Benedict."

Thomas’ depressing post quickly went viral, with over 20,000 likes and 4,000 retweets from a sickened and confused Internet.

Some felt it bore a certain, *ahem,* resemblance.

Who knew a breakfast plate could make a decent substitute for a Rorschach test?

Others argued Brexit must be to blame for the nauseating meal.

Always hate when things get political at the breakfast table.

Not like you really need to call in the experts for a final ruling on this one.

People couldn’t believe such a meal could be created intentionally.

Despite the clear care that was taken in tenderly folding the sweaty ham, this poor excuse for an Eggs Benedict feels like the result of a freak accident.

Thomas confirmed the struggling Eggs Benny was indeed on the Tesco’s menu.

@Spk61 @PKendrickWIG @Tesco Funny you should ask, alarm bells were ringing when they said they didn’t know if they… https://t.co/W24nzFr5Wq
— HeskethThomas (@HeskethThomas)1546801763.0

But he did concede that he should have known better than to actually order it.

Ultimately, most agreed that Thomas may have gotten what he paid for.

As a grocery chain, Tesco’s isn’t exactly famous for their fancy brunch items.

When the haunting image went viral, the grocery chain responded with an apology and advised Thomas to alert a store manager.

Despite the offer, Thomas was not hopeful the meal would be saved.

Apparently, the infamous Eggs Benny is standard at Tesco’s.

It’s really not all that surprising.

One Twitter user had the inside scoop on Tesco’s kitchen prep, and it doesn’t sound all that appetizing.

At least Thomas got a gift card for his trouble.

Maybe next time he’ll stick to a coffee.

Thomas’ traumatic breakfast inspired others to share their own disappointing meals.

The color matching hot dog and bun are a standout on this depressing plate, but potentially the least of its problems.

Look, no one is ordering fast food and expecting a gourmet.

But most people are looking for something that’s at least edible.

In some cases, the difference between expectation and reality can mean going hungry.

So I ordered the Southwestern Steak Salad at @Applebees tonight and this was the outcome. I understand that food is… https://t.co/VCbr0uAe6J
— hayes (@hayes)1512526668.0

*When your order something online v. when it arrives*

We all know real life fast food never measures up to its glitzy advertising.

But this is just next level disillusionment. And sorry, what exactly is it a “stack" of?

This probably tastes better than it looks, but they better not have charged extra for that guac.

Sure, mistakes can happen in food prep.

Especially when you take the modification “cheese on the side" too literally.

But some mistakes are unforgivable.

So these are jut sticks? I mean how does this even happen?

Why is cheese such a problem in the fast food world?

Surprise! Your day is ruined.

Fine, accidents are one thing.

But intentional crimes against food? The label is just salt in the wound.

Bananas have their place, and this isn’t yet.

And you thought pineapple pizza was a problem.

I mean I guess there’s at least some protein in this.

Still, sometimes even the worst meals are better than the food experiments we create in privacy of our own homes.

Although, this does earn points for creativity.

Wow. After all these food horror stories I could really use a drink.

NO. NEVERMIND, I TAKE IT BACK.