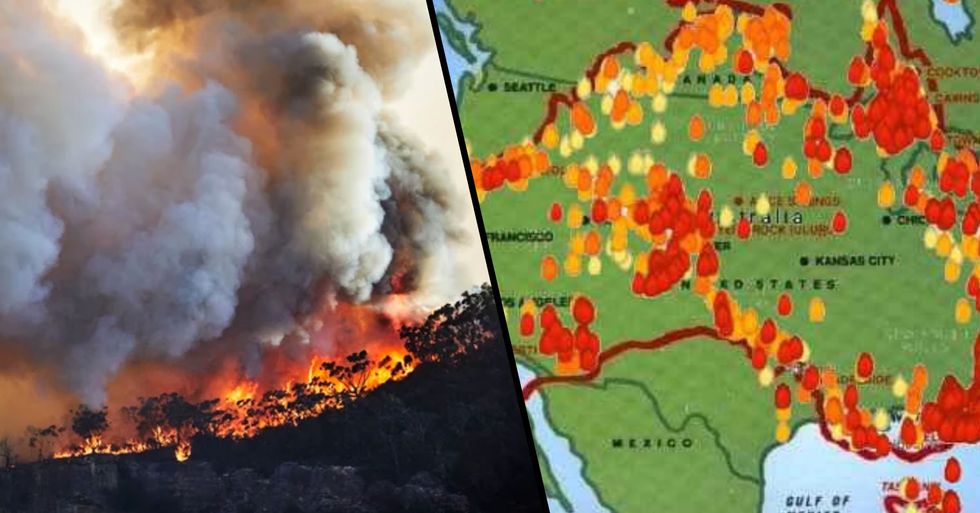 Americans Confess They Have No Idea How Big Australia Is

Australia is currently experiencing it's worst bushfire crisis in modern history, and the conditions that the Australian people are currently living under amid the devastation is simply unimaginable.

To put the scale of destruction into perspective for us Americans, one Twitter user compared the Australian map with our own map. But, rather than wake people up to the horrific crisis, it made many people question their geography skills.

Australia is currently being ravaged by one of the worst bush fire crises the world has seen in decades.

And New South Wales, in particular, is suffering immensely at the moment.

There have been fires reported in every state, but New South Wales is truly taking a beating by bush fires and is undoubtedly the hardest hit. According to CNN, so far, in New South Wales alone, more than 2000 homes have been destroyed.

Business Insider reported that close to a hundred and thirty bush fires continue to burn in populated coastal and inland regions to the city's north.

So far, an estimated 10.7 million hectares (26 million acres) have been burned, and over a billion animals, birds, and reptiles have perished.

And were left stranded for hours awaiting evacuation. It was a truly heartbreaking sight.

The scenes are truly apocalyptic, making the rest of us incredibly thankful for what we have.

Most of us can only imagine what it's like to live under such terrifying conditions...

And many of us are feeling incredibly thankful that we are likely to never have to experience such a devastating disaster in our own country.

But this makes it difficult for us to comprehend the sheer scale of the flames.

So, in an attempt to make those of us living across the globe understand the seriousness of this crisis, various people have been taking to Twitter to try to put the mass scale into perspective.

For those in Europe...

This Twitter user explained how the flames have become larger than the entire country of Belgium.

The scale of the fires was also mapped out across the continent...

And for us here in the States...

The map of Australia and it's several burning points was placed over a map of the U.S.A. just to highlight the devastating scale of the crisis.

The image put a lot into perspective for us...

But, for some, it raised a few questions... Is that an accurate, to-scale map of Australia?

It turns out that many of us had no idea just how big Australia is...

And it called for many confused Twitter users to question the validity of the image. "I didn't realize Australia was so large! Is this to scale?"

Many people expressed their shock at the size of Australia...

Because apparently, they thought we were the biggest. Of course. "Australia is as large as the US? Didn't know that."

But some people had different ideas entirely...

Some believed that Australia was "much larger" than the States. Just how big did you think it was, Jon?!

And then there's this guy...

Really? For those of you who think Australia is a continent (which, if you do, you need to take a serious hard look at yourself), Australia sits in the continent of Oceania alongside other countries such as New Zealand, Fiji, Tonga, and Papua New Guinea. Regardless of our idiocy when it comes to geography, the fact still remains that Australia continues to burn with devastating consequences. Keep scrolling to see a list of photographs that sum up the crisis, and highlight just why the country needs our help.