Americans Respond To ‘What’s The Most Absurd Medical Bill You Have Ever Received?’ | 22 Words 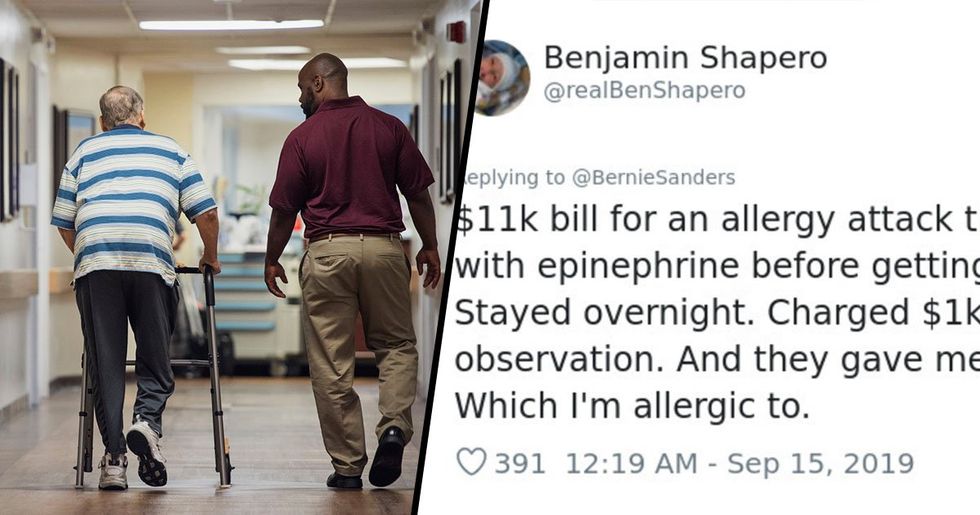 Americans Respond To ‘What’s The Most Absurd Medical Bill You Have Ever Received?’

Medical bills are the bane of everyone's existence.

As the economy continues to plummet into the ground, it's dragging our medical system with it. Everyone deserves to be healthy, but when people are neck-deep in debt just because they sat in an ambulance, it's no wonder that people are finding alternative methods to deal with an emergency. Some have gone as far as treating themselves just because they can't risk another unreasonable expense slapped onto their tab.

Recently, Bernie Sanders tweeted this question: "What’s the most absurd medical bill you have ever received?"

Here are some of the responses. Warning: this article will contain some heartbreaking content, but this is the harsh reality of the system...

@BernieSanders $10K to pay for our daughter's neonatal care one year after the fact. She died thirty minutes after… https://t.co/Zm6GvroAJM
— didderbops (@didderbops)1568518854.0

There's a lump in my throat reading some of these stories.

This is what I meant when I said that people were taking matters into their own hands just so they could avoid expensive bills.

What could possibly cost that much in a hospital? Let me know.

I really can't believe she was forced to pay 500 dollars just to confirm the fact that her baby had, in fact, died. Wow.

7. "...the doctors not knowing what was causing the pain."

Yet they sent him home with painkillers and slapped a sixteen thousand dollar bill on it. Fun fact: America charges double for medical bills compared to any other developed country.

@BernieSanders $11k bill for an allergy attack that I already treated with epinephrine before getting to the hospit… https://t.co/qJzhBJHyNw
— Benjamin Shapero (@Benjamin Shapero)1568506773.0

A grand an hour? No thank you. I'll just grab a bunch of anti-histamines and sort myself out.

So, let me get this straight. This woman just lost a baby, was on the brink of death herself, but instead of being able to heal, she was too busy fretting about the medical bill? Wow.

This country seems to care less about its victims than it does about the oppressors.

12. "Everyone deserves the opportunity..."

Addiction is a tricky one, because some people would say that you got yourself into the mess so you must get yourself out, even if that means paying so much for additional treatment. But personally, I think if you have to pay an arm and a leg for treatment, then you're more likely to avoid it.

I would have just gone down to Target and grabbed myself a box. I would have saved myself 1,395 dollars. Bloody hell.

Put your personal opinion of Obama to the side and understand that Obamacare was the best thing that ever happened to this country.

How did the appointment last a whole three seconds and still be worth twelve thousand dollars?!

Imagine not being able to attend an appointment just because you couldn't afford to? So what are you supposed to do? Just sit at home with cancer?

My heart aches for these mothers.

The only thing that probably did for her mental health is make it worse.

Her child, who was six months old, died in her arms.

Yet, in the end, they both ended up sending her separate medical bills.

I bet she could have told herself that.

The best advice someone could give is: "Just try and pay ten dollars a month."

The saddest thing about this scenario is that if he/she was married, their spouse was inherit the bill.

@BernieSanders $115k for an emergency c-section to save mine and my son’s lives. Luckily we have “excellent” insura… https://t.co/VfAimFLLu6
— Margaret Wilson (@Margaret Wilson)1568603466.0

This seemed to be the case with a lot of patients that also commented under the post.

Imagine spending 5 thousand a year on a non-emergency? A real emergency would be double or even triple that!

Even the lowest payments in this list are still unnecessary.

Reading this one really broke my heart. Imagine being so much debt that you have to file for bankruptcy?

Our country needs to do something about this. With the introduction of a proper re-boot, we can have a more affordable medical system put in place. Everyone deserves the right to be healthy.