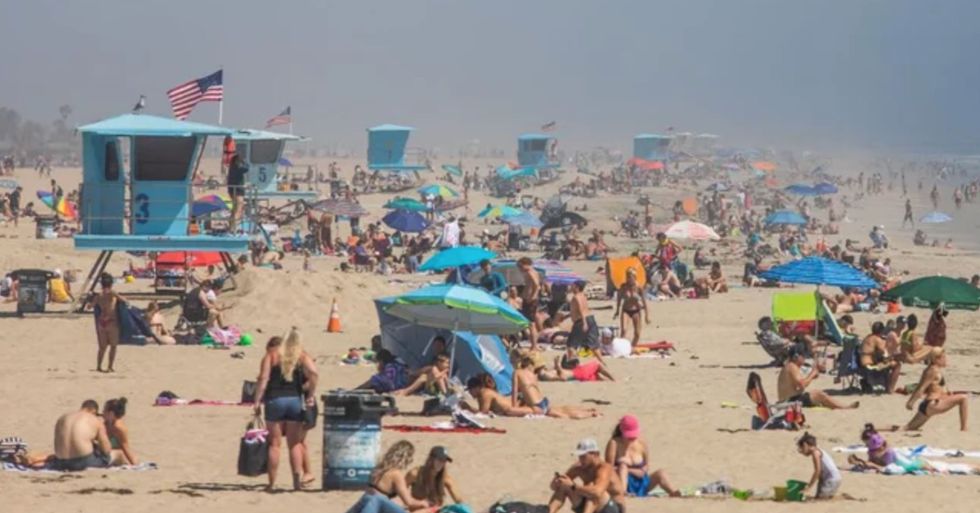 Groups of people have been branded as "America's Quarantine Quitters" after more and more have been giving up on the lockdown and heading out to beaches.

Keep scrolling to check out the shocking images...

The world is currently living through an incredibly turbulent time.

The global pandemic has taken our planet hostage and it is showing no signs of letting go anytime soon.

The United States is officially the worst affected country in the world.

And a number of different states have been forced to close their restaurants and bars in an attempt to prevent any further spread of the virus - meaning a mass loss of jobs across the country.

But our own President took a little bit longer to consider the pandemic as a serious threat.

In January, just after the outbreak, he was quizzed on his thoughts on the virus, in which he replied: “It’s one person coming in from China, and we have it under control. It’s going to be just fine."

And, even when the number of cases in America started to climb...

Trump has persistently fought against the media regarding the pandemic...

And fast. As the number of cases and deaths grow here in the States, people are growing increasingly more concerned with Trump's blaze attitude regarding the pandemic.

On March 13th, mere days after he compared the virus to the common flu, he finally declared a national emergency.

But regardless of the national emergency...

Many people are refusing to abide by the lockdown rules.

In several different states, people have been seen going about their days as normal...

Including staging protests and flocking to public areas to socialize.

It seems that more and more people are catching on to this blatant disregard of the lockdown rules...

And they have been branded as America's Quarantine Quitters (or the QQA for short).

People from all around the country have been going about their days as they please...

And the photos to prove it are sickening. Take this image of people queuing up in a fast-food restaurant from Coney Island in New York, for example.

People recently staged a mass gathering in Baton Rouge, Louisiana to protest the reopening of businesses...

We don't see any social distancing measures being practiced here...?

And people were spotted happily gathering in groups and sitting around for several hours.

This most certainly doesn't look like a country struggling massively from a global pandemic.

The hot weather has caused thousands of people to flock to the beach...

Including locals from Tybee Island, Georgia.

We understand the temptations during these nice spells of weather...

But people need to understand the importance of our health and the health of others.

Florida State has begun to slowly reopen beaches for essential exercise only...

And even though authorities have been issuing fines to those breaking these reopening rules, people continue to enjoy their time on the beach in groups as if nothing is happening.

Of course, people have been left furious over these mass gatherings...

And many have pointed out that millions of doctors and nurses are working tirelessly to have people ignore their pleas and warnings.

How are we supposed to overcome this virus if people continue to put themselves at risk?

Sadly, it seems to be a never-ending cycle here in the States.

But some people showed support for these mass gatherings...

And just like this Twitter user, many feel that being stuck at home for a month is more than enough.

Things urgently need to change if we want to combat this deadly virus...

And by staying at home, the chances of spreading the virus, even more, reduce dramatically.

For more on the pandemic...

Keep scrolling to read about the recent house party in Chicago that held over 1,000 people...