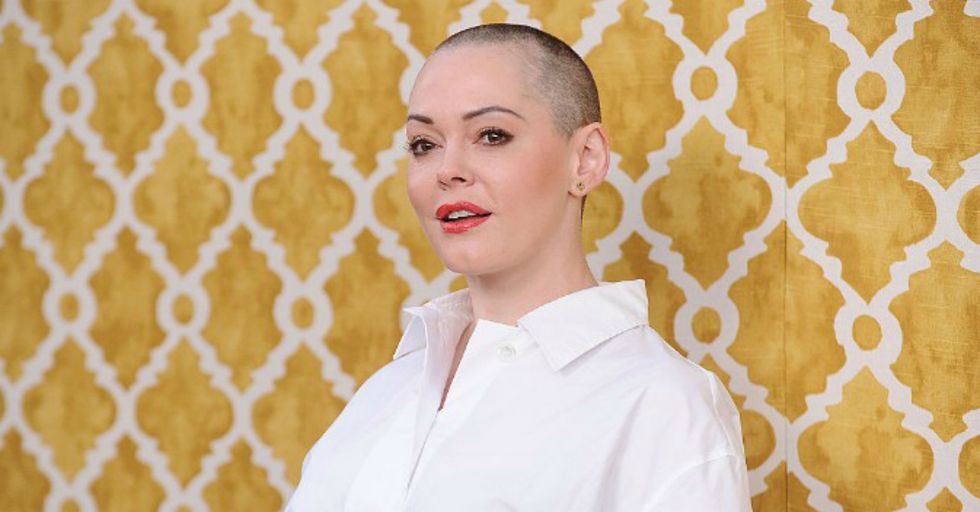 Amid a Scandal All About Silencing Women, Twitter Suspends Weinstein Victim Rose McGowan

After the New York Times published an article detailing decades of sexual harassment at the hands of film producer Harvey Weinstein, many celebrities began speaking out against Hollywood's tendency to cover up the deplorable actions of powerful people. Gwyneth Paltrow and Angelina Jolie shared their own stories of being harassed by Weinstein. Terry Crews tweeted about being groped in public by a Hollywood bigwig. Stories like these will more than likely continue to come out in the wake of Weinstein's dethroning.

Rose McGowan has been one of the most vocal celebrities. Unfortunately, Twitter seems to have a problem with that.

As people continue to share their stories of being harassed, abused, and paid off by Harvey Weinstein, actor Rose McGowan has consistently shown her support for the victims.

McGowan was listed in the New York Times article detailing some of Weinstein's behavior over the past few decades. In 1997, McGowan was awarded a $100,000 settlement "after an episode in a hotel room at the Sundance Film Festival."

Since the story was published, McGowan has been retweeting other victims to show her support.

She has also been encouraging her followers to sign a petition to have The Weinstein Company completely dissolved, saying that every man in the company has "the blood of sorrow on their hands."

When Ben Affleck said that the Harvey Weinstein allegations made him sick, McGowan was quick to call him out:

McGowan called Affleck a liar. She said that he has been well aware of Weinstein's behavior for years.

Something definitely doesn't add up, here...

Let's do the math. A Hollywood mogul sexually harasses multiple people over the course of decades and is just now dealing with the consequences for his horrendous behavior. Meanwhile, a woman shares her support for the many victims who have come forward...and Twitter suspends her account? Are we seriously still going to silence women for calling out BS when they see it? This is exactly the kind of thing we're trying to stop, right? Twitter has some explaining to do.
20%