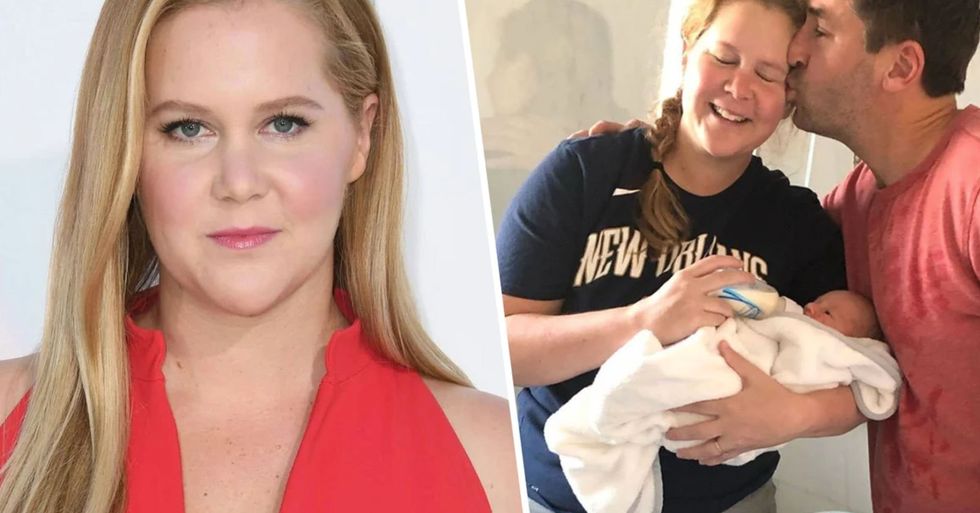 Amy Schumer has made a very public apology to her baby son for accidentally giving him a name that sounded very rude...

Since the birth of her son last year, Amy Schumer has been making headlines for the hilarious mistake that she made with his name.

And now, she has apologized to her baby son for this potentially disastrous naming blunder.

She was very open and honest about motherhood from the get-go...

The thirty-eight-year-old spoke about her son's name on her podcast, 3 Girls, 1 Keith...

An easy mistake to make, right?

Well, not all fans were convinced that this was a mistake and many thought that Amy did this on purpose as a publicity stunt.

However, this most certainly wasn't the case.

In an interview with Howard Stern, Amy was joined by Gene for the video interview when Howard brought up the whole name situation.

She explained how she and Chris realized their mistake "a month in."

She continued to say, "You know, you're like, the new parents and you're just tired and in ecstasy. And then - I don't know if some troll on the internet or somebody... I read it, and I was like, oh my God!"

You really can't unhear it...

"You're going 'Gene Attell', it just - me, a filthy person - it never dawned on me. All the blood rushed to my head," she said, laughing.

And then referring to the incident as "the first of many failures"...

Since her interview with Howard...

People have been obsessed with Gene's unfortunate naming blunder, and Amy has yet again addressed the situation in another interview with TODAY.

Amy and her husband Chris appeared together on the live chat to discuss their life together in lockdown...

And of course, the subject of poor little Gene's name was brought up.

Amy sat Gene on her lap and said, "I mean, can you believe we did that?!"

"What kind of an epic…How am I going to apologize for that? Gene, we're sorry. We're so sorry," she added, then saying, "We fixed it."

Gene seems pretty happy... regardless of his name change!

"It just means that we're, like, unstable, I guess" she joked, to which Chris replied, "He'll find that out, though." What family isn't unstable though? Let's be real for a minute!