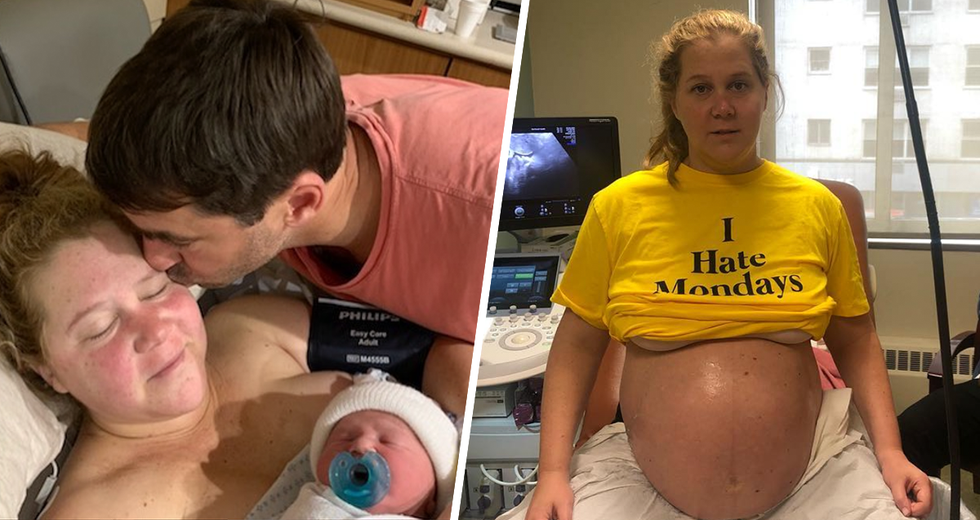 Amy Schumer, the 37-year-old actress and comedian, has welcomed her first baby — a boy — with husband Chris Fischer. The baby was born on Sunday, May 5th and the couple announced it on Schumer's Instagram.

Schumer is famous for her raunchy, outlandish, often overtly sexual humor, and many wondered whether her comedy would become more demure once she was a mother. In March, Netflix released a stand-up special of Schumer that she filmed while visibly pregnant, and fans were happy to hear that while she sounded a little older and maybe a little wiser, her personal brand of humor had not changed.

“10:55 pm last night. Our royal baby was born," Schumer wrote on Instagram, likely making a joke about just beating the clock on the birth of Meghan and Harry's (actually) royal baby.

A quick stop at the Met Gala...

Schumer posted a hilarious photo of herself yesterday en route to the hospital.  She made a quick stop at the Met. Posing in front of a background of harried workers putting the Met Gala backdrop together, she showed off her full-term belly and vamped on the famed steps.

Just days before, Schumer posted this hilarious photo which she captioned with "Oh yeah does it feel to everyone like I’ve been pregnant for a long time?" Come to think of it, it does feel like she's been pregnant for ages. But we're gonna guess it feels a lot longer when you are the one lugging around that growing belly.