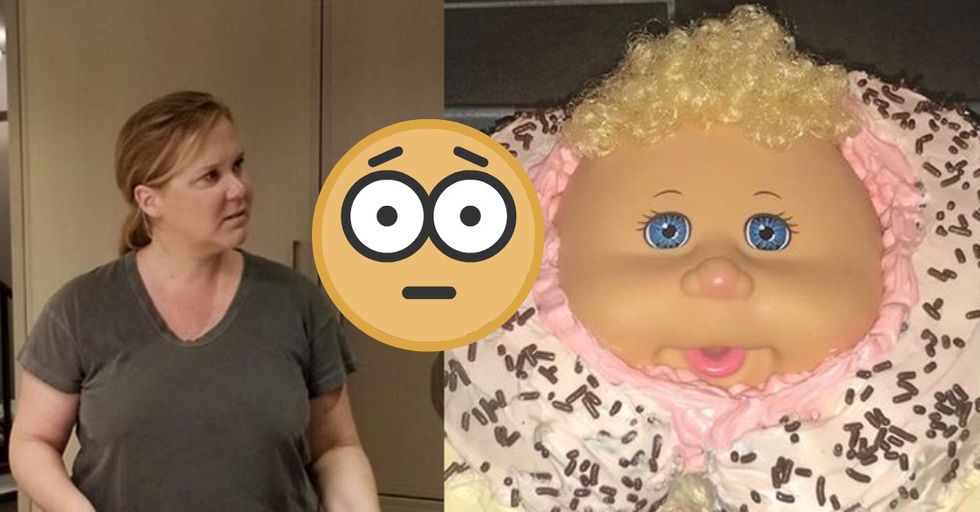 Being pregnant is an experience that nothing can prepare you for. No matter how many baby books you read, Mom friends you talk to or how many watermelons you duct tape to your abdomen, the actual act of growing a human inside your body is both completely horrifying and absolutely incredible at the same time. As a currently five-months pregnant woman myself, I know this all too well.

Since she first announced her pregnancy in October of 2018, Amy Schumer has been more than open about what a tough road her first pregnancy has been. And, in her typically candid fashion, she's been sharing some of the more hilariously bizarre moments with her adoring fans. One of those moments happened when her sister-in-law brought her the type of cake that nightmares are made of. If you're at all squeamish or if the idea of labor makes you feel more nauseated than inspired, proceed with caution.

Amy Schumer doesn't seem like someone who would be easily grossed out.

This is, after all, the woman who proudly announced she was on her period while doing an interview on the red carpet at the 2016 Emmy's. After being asked who she was wearing, she replied "Vivienne Westwood, Tom Ford shoes, and an OB tampon."

Or how about that time she slipped in a fart joke with a romantic anniversary post?

For her six month anniversary, Schumer posted this adorable photo along with the caption, "Married 6 months today. I love you more every day. Sorry, my fart woke us up this morning." So sweet!

So when she first announced her pregnancy, we knew we were in for a wild ride.

Pregnancy TMI is probably the grossest of all TMIs, am I right? Schumer first dropped the news in October of 2018 on Twitter while announcing some "news."

This will be her and husband Chris Fischer's first child.

Schumer and Fischer, a professional chef, were married in a gorgeous secret waterfront ceremony in California. And yes, her dogs walked down the aisle with her. Because duh.

Her wedding guest list was basically a who's who of Hollywood A-listers.

Chelsea Handler, Larry David, Jennifer Aniston, Judd Apatow, David Spade, Jake Gyllenhaal and of course Schumer's BFF Jennifer Lawrence were in attendance, to name a few. I couldn't even get the relatives who live one-state over to show up to my wedding.

Since announcing her pregnancy, Schumer has been completely candid about the less-than-pleasant parts.

While most pregnant celebrities would only post the glamour shots of their bumps on the red carpet or tucked tightly into activewear, Schumer hasn't shied away from showing the public the ugly side of what goes into growing a human.

Especially in the first trimester, which tends to leave you so completely wrecked that you're crawling into bed at 7 pm and eating all of your meals there. Maybe that was just me...

Or the less-than-flattering undergarments that we're forced to wear.

Sure, Vanessa Lachey's Instagram page was filled with candid bikini shots of her running along a rocky shore without an ounce of extra fat on her body when she was pregnant, but that's not what real life looks like.

And how hard it can be to find the correct bra while expecting.

Your pregnant body is constantly changing, and it can be hard to keep up with. I finally came to the realization that I probably should stop wearing the same bra I've had for the last ten years, and I'm almost in my sixth month.

Schumer's pregnancy, however, has been anything but routine.

She suffers from a complication called hyperemesis, which causes extreme nausea and vomiting. In some cases, this can last throughout the entire pregnancy.

While I suffered from morning sickness throughout my first trimester, I can't even imagine how horrible it would be to be denied the relief of feeling like a normal human being again once the second semester started.

The condition has even had an impact on her performance schedule.

She's been forced to cancel some stand-up shows due to hospitalization and was under doctor's orders not to travel across the country. Luckily, however, it seems as though her condition is starting to improve.

She posted this emotional video to Instagram on November 5th of last year.

While she mentions her constant puking, she's clearly able to enjoy seeing her little one on the ultrasound. Seeing your baby for the first time is truly an experience like no other.

Amy Schumer is clearly going to be an amazing Mom.

Her maternal instincts are obvious just by browsing through her social media pages. She already treats her dog Tati as if she were her flesh-and-blood child. Awww!!

She's makes an effort to educate herself on her changing body.

It can be easy to just "google" any questions you may have during pregnancy, but the best way to get a thorough understanding of what's going on inside you is to crack open an actual book. Also, anything that tells me that gaining a lot of weight might be a good thing is okay in my book.

She's also not afraid to be goofy.

Think about how lucky her future kid is! He or she will have the most hilarious Mom is town. Plus, she's obviously always down to play dress-up.

So, because of Amy's overall awesomeness, a beloved family member decided to do something special to celebrate this exciting time in her life.

And by "special" I mean absolutely horrifying. Are you ready to see this thing?

Let's just take a moment to really take it all in. I'll wait here.

If your face looks exactly like Amy's does in this GIF, you're not alone.

That was my reaction to it as well, along with some choice expletives. And I'm guessing that it's not just because I happen to also be pregnant. This would probably horrify anyone who dares to lay eyes on it.

Now, let's take a closer look at these pics.

This cake was hand-made by Amy's sister-in-law, which, if you think about it, is really kind of sweet. After all, you can tell that a lot of work went into making this thing.

Here's the master chef posing with her creation.

You can tell by the look on her face how proud she is of it, and I can't say I really blame her. I don't know the first thing about baking a regular cake, let alone one with a literally baby head cresting the top of it.

Amy looks less than thrilled with the gift.

She's probably thinking, "I've spent the last few months trying NOT to picture this exact moment, and you decided to sculpt it in graphic detail out of something edible?!"

This angle really shows off the more unsettling aspects of this, shall we say, unique dessert.

Did this particular part of the human anatomy really need to be included, Amy's sister-in-law? Did it?

After doing a bit more research, I discovered that cakes like this one are actually surprisingly common.

Sure, this one is MUCH more tame than the one Amy was given, but it's not without its creepiness. Is it me, or does it look like this baby is about to burst out of this poor woman's stomach at any moment like that scene in Alien?

And get a load of this horror show.

And here we see a plethora or awfulness.

While the first one just looks wrong, the other three are literally the stuff nightmares are made of. I would probably leave a baby shower if any of these were the cake I'd be forced to eat. And I'd pretty much go anywhere for some cake, so that's saying a lot.

The realistic nature of this one is what makes it so unsettling.

"I'm just going to top this baby off with an entire bottle of edible blood." Who wouldn't want a piece of that?!

Oh, this is just plain unnecessary.

We know there's a baby in there. Do we really need a weird, creepy window to confirm it? Especially one that makes it look like the baby is some kind of hideous gremlin?

Can we all just agree to end this awful, awful trend?

I don't know why it started, but it's pretty much the last thing a pregnant woman would want to look at when she's as big as a house and already feeling weirded out about the inevitable and terrifying concept of labor.

Seriously though, Amy, if you haven't had your baby shower yet, I'd love an invite.

I'd make sure your cake was classy and refuse to force you to play any embarrassing shower games. Us preggos have to stick together.