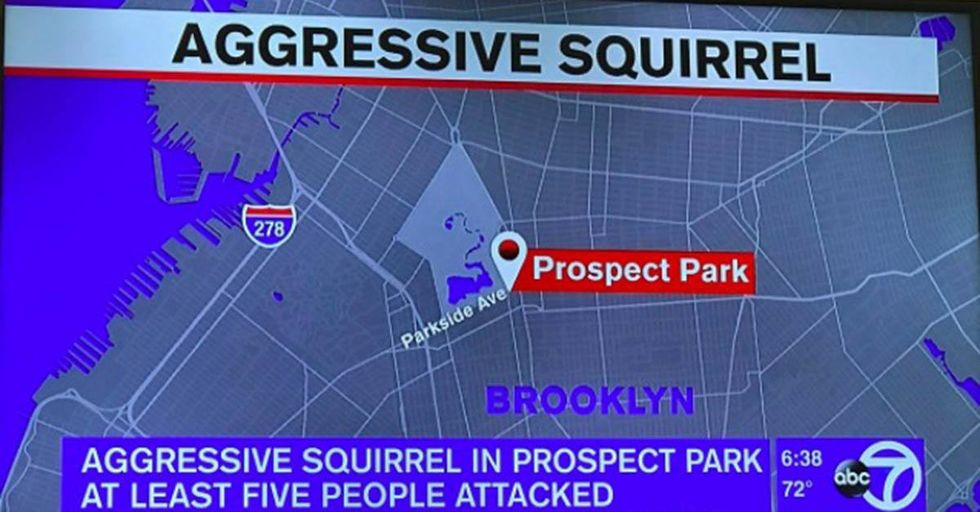 There's nothing quite as sensational as an animal running wild through the street of a city, raising hell and plaguing the citizens that cross its path.

That's what's going on in Brooklyn, but there's something a little...different about this story.

Well, the animal is a squirrel.

Yup. It might sound ridiculous, but as you'll see below, it's a very real problem.

Everyone who's ever visited an outdoor amusement park knows:

You're not supposed to feed the squirrels.

Like many seemingly silly rules, this one has a reason behind it.

Squirrels can get a little, pardon the pun, nuts if they get used to food from humans.

And if you need more than a sign to convince you of the dangers of squirrels...

Keep on reading, and take a look at some squirrel attacks that were serious enough to attract honest to goodness media attention.

Here's the headline as it appeared on the news.

How were these people "attacked" by the furry creature? Well...keep reading.

But if you have a case of Sciruophobia - a fear of squirrels...

You better find the door. The story you come across on the next page likely won't help you overcome your fear!

As you can see, the effects of this angry animal are no joke.

This poor girl was minding her own business when the animal jumped up and bit her. Poor thing didn't do anything to deserve this.

I'm inclined to believe the girl, and the list of other victims seems to corroborate her claim that she did nothing wrong.

It's easy to imagine that this aggressive behavior comes about as the result of rabies, but no one knows just yet. If that's the case, these bites are even more troubling and dangerous.

Another man was bitten the same day.

It's hard not to laugh at the headline, but we wouldn't be laughing if this was another animal, so these victims certainly deserve our compassion.

One man found the squirrel to be fairly bold in approaching him — another sign of rabies.

Sure enough, in this clip, he's bitten as he feeds the critter.

Is it one squirrel, or a rash of rabies outbreaks among squirrels?

Naturally, there is no shortage of jokes about squirrel attacks or the nature of the Brooklyn residents who are being victimized here.

Hopefully, this will be over and done with before anyone else gets hurt, because these attacks certainly aren't funny to the victims.

It gives an account of the attacks and info on what to do if someone's bitten by this possibly-rabid animal.

I agree with the tweeter. You have to love this sort of stand-up mentality, however misguided as it may be.

If there's a showdown, I'd like to see a video. That would be funny.

The city's health department is on the case as well.

Hopefully, this surreal story will be over soon enough so no one else has to explain to a doctor that they need rabies shots thanks to a rabid squirrel in the park.

In the meantime, just remember: