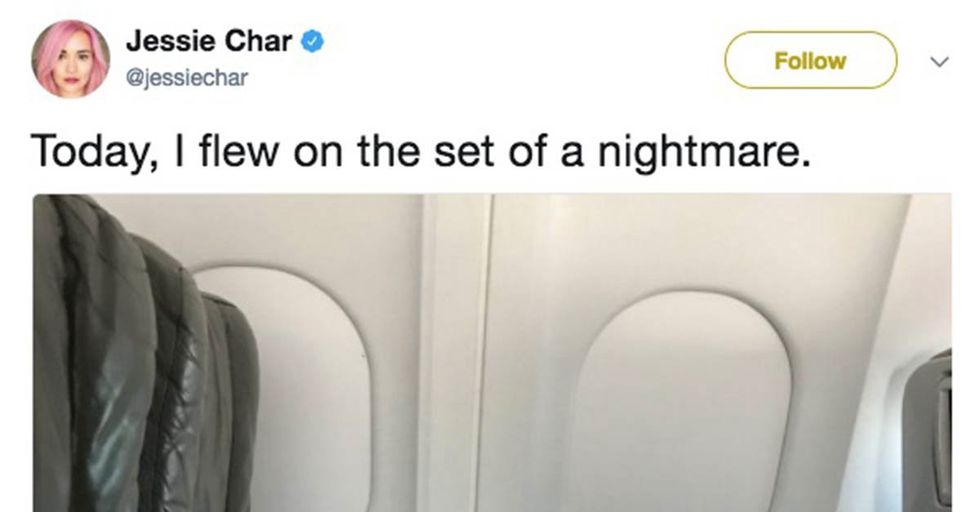 Flying is the absolute worst. Nobody's going to argue that. Even when a flight is "good," it's really, really bad.

Check out one passenger's terrifying discovery when she found her way to her seat.

When this Twitter user sauntered up to her airplane seat, she found a pleasant surprise.

Two open seats in her section. Meaning she was able to really spread out. She shared her good fortune on Twitter because, well, that's what people on Twitter do.

But her happiness was short-lived as things took a turn for the...gross.

OMG! WHY? What kind of person does this?

At some point, she had to sit down and couldn't keep documenting the horror she was experiencing.

Well, not with pictures, anyway. But she offered a few more written accounts.

Done guessing? Good. Because she's going to tell you.

Like some sort of inconsiderate, airplane-flying...octopus or something. If you put your feet up like this on a plane, then I'm sure you're not bound by the unspoken rule that you never mess with windows that aren't yours.

Reaction on Twitter wasn't divided. Oh, no. Everyone was on the same page here.

This guy or girl is a horrible person.

Some people couldn't help but see a similarity.

And possibly a remedy. Just douse the person with water. It worked in the movie!

Of course, this is even grosser than being near the feet, so maybe this just is an effective response on paper, not in real life.

We don't know what happened next. Hopefully, this was addressed.

Because this is just not OK! It's not even bad. It's terrible. There should be sky marshals who specialize in manners just to make sure stuff like this doesn't happen. Could behavior on a plane be any worse?