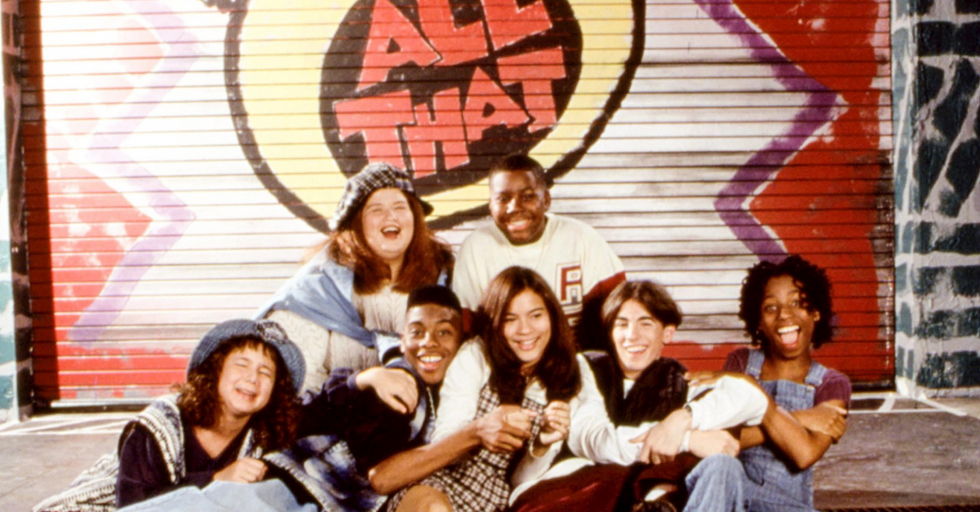 Awwwwww yeah, here we go, fam! The past few years have proved that we love a TV reboot. Will and Grace is back and...the same...as ever, Twin Peaks returned to the small screen, and Roseanne, Murphy Brown, Magnum P.I., Queer Eye, and Charmed are among other shows that have found new life in recent years. Some reboots work better than others (hey, Queer Eye, heyyy!), but the point is that we just can't seem to get enough of, well, things we have had already.

There is a certain sort of comfort and a sense of nostalgia that gets activated when a show you watched as a kid comes back anew. And if you are a kid who grew up in the '90s and early '00s, you know you experienced the golden age of kids' television, thanks in no small part to Nickelodeon. And the network that gave us Stick Stickly and the orange splat is about to rock your world once again.

The Saturday Night Live-like sketch show was over-the-top, super funny, effortlessly diverse, and it will always hold a special place in the hearts of the kids who grew up watching it.

I mean, Kenan and Kel got their start on the show.

Welcome to Good Burger, home of the Good Burger, can I take your order? We all have that line locked in our brains forever.

Josh Server was an unforgettable member of the original cast, too.

He created such classic characters as Big-Ear Boy (pictured above, obviously) and Detective Dan. I mean, comedy genius.

"Vital Information for Your Everyday Life" is still to this day one of the greatest recurring sketches in all of sketch comedy. Come at me.

Of course, in the later seasons of All That, we were introduced to some future superstars.

Amanda Bynes, Nick Cannon, and Gabriel Iglesias are huge names that come to mind. All That was a true masterpiece.

And who could forget, the man who lived the American Dream, Kenan Thompson?

The dude started on All That and honed his sketch skills so well that he's currently the longest-running member of the cast of Saturday Night Live. I mean, this is the dream!

And now, Nickelodeon is bringing back All That, with Kenan himself at the helm.

I don't know about you, but my first reaction was, "YES PLEASE!" I feel like Kenan will know how to do it right.

The Internet pretty much broke when this news did.

And bringing back All That, which was beloved by so many, is a great way to do that.

There were a few people who weren't immediately on board but then learned that Kenan would be involved.

@THR @Nickelodeon @kenanthompson The only reason I'm remotely okay with this is because Kenan is producing it.
— Meri (@Meri)1550162436.0

This is important. He probably knows the show and the whole business of sketch comedy better than anyone in the world.

This is pretty much the prevailing attitude toward Kenan:

He's a straight gem of a human being. A kind of sketch comedy. A lord of late night. Kenan is the tops.

So we're all just really glad that he's finally getting the recognition he deserves.

Sure, this new All That might be fun and funny, but mostly we're just happy that Kenan gets another chance to do what he does best.

Of course, when there's talk of Kenan and All That, talk of Kel is never far behind.

Most of the people freaking out about the reboot are people who watched the original show with the original cast.

Luckily for us, the sentence "Veterans of the original will also make special appearances" is a sentence in the Hollywood Reporter article about the reboot. I know.

People are really jonesing for the return of some of our favorite All That characters.

Remember Pierre Escargot? The French boy who took a bath in a rain coat?

Yup, that's the one!

Gosh, from the time he was a little kid, Kenan was such a good, confident performer. I'm stoked that he's in charge of this new version of the show.

Let's talk about what needs to stay from the original show.

So many people want the theme song to stay the same. And I don't blame them. It is legendary. The diversity, the cool music performances, and the backstage scenes should also stay.

Of course, there are some skeptics in the crowd.

"All that" does seem like a phrase that was popular in a different time. But I think kids today are smart. I think they'll pick up on it.

In the age of reboots, to some, this is just another misstep.

Why do we have to remake everything? Oh, I don't know, maybe because they got it right the first time.

Most of Twitter was immediately here for a new All That.

I hope it's good. I hope they let Kenan do what he wants to do. I hope kids young and old can watch and laugh together.

In an ideal world, the new All That would appeal to the original audience as well as a new one.

But if, in the end, it's a subversive, hilarious, and positive platform for young comedians, that's totally great.

That's what All That was for us.

At the end of the day, Kenan Thompson is the best possible person to be in charge of this reboot.

Double Dare is back and better than ever. And even though the All That reboot has captured everyone's attention, the network simultaneously announced a few other other shows they're bringing back...

Like Are You Afraid of the Dark? for example!

Submitted for the approval of the Midnight Society, I call this story, The Return of Are You Afraid of The Dark? https://t.co/BywsdFaI6D
— Nickelodeon (@Nickelodeon)1550244183.0

That's right. The Midnight Society will reconvene around the campfire once again.

Are you ready for more spooky stories?

I sure am! That show is legit terrifying. I've rewatched some episodes as adults and they are still super scary.

Most people think these reboots are a great idea.

I happen to agree. This was the golden age of kids' TV. Why not try to recreate the magic?

You can watch more of my adventures on @Nickelodeon later this year. https://t.co/zbEYASjTdM https://t.co/8NskEXhZtu
— Paddington (@Paddington)1550156456.0

There will be an animated Paddington series heading to Nick too. It just keeps getting better and better.

The Paddington movies are delightful to the nth degree.

There are grown-ups out there (like me) who love Paddington so very much. So will his fans follow him to Nickelodeon?

I think you have your answer. I'm right there with you, Ben.

Now that all these Nick shows are coming back, there's only one more thing we need.

That orange splat! And maybe Stick Stickly. He was the best anthropomorphic popsicle stick around. Share this with someone who'll be excited about the news!